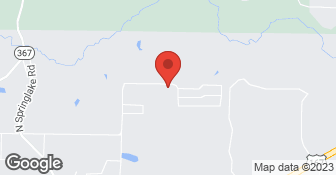 Outstanding! Brad Clemmons (Foreman/supervisor) and his crew did everything I wanted done and did it well. Brad and his crew were very professional, courteous, and made sure I was satisfied before they left. I highly recommend them and plan to use them again in the future.

Excellent job completed by Brad Clemons and his crew. They were very professional and timely, such a nice experience! Will contact them again for tree services needed!

Description of Work
Needed the canopy lifted on my trees and some ivy removed from a tree!

Great! Trimmed the tree back, cleaned up the yard and hauled away all debris! Excellent job!

Wonderful. They were very careful and patient with a very large tree and a small area in the backyard. Two trees removed, one in front and one in back...very old and large!

I contacted Capital Tree service on behalf of my 83 year old father who noticed the top of one his trees was splitting probably from the high winds. Since it was after hours the guy contacted by Dad and NEVER mentioned he was booked up but quoted him $450 or $500 and hour for the equipment and $250 an hour for his men. They arrived at 9pm but the clock started when they arrived at the company. Needless to say, the tree is still standing and it cost my Dad $4500.00! They didn’t clean the mess up and also left empty water bottles in my Dad’s yard. They topped the tree on the side it was mostly splitting which means WE will have to cut the tree down. I contacted the office the next day and someone returned my call and stated “we can return and clean up the mess but we have to charge your Dad.” I was like you’d think for $4500 you could have returned to clean up the mess! Sure it was an emergency after hours call but for $4500 and the tree is still standing with a yard full of limbs and debris should be unacceptable by any business standard! I would suggest anyone stay clear of this tree service and had I looked on Angle’s List first instead of google then I could have saved my Dad a lot of stress! Who treats a customer and their property like crap and then replies they can come back for a fee after receiving $4500. So really one tree by their estimates would be around $6000 to $10,000 the way they charge! I don’t think so! Be warned, find another emergency tree service. One that will not try to squeeze your wallet and leave your property in turmoil afterwards for you to clean up! Another fee, I don’t think so!

They were pricey, but were courteous and professional. Look around, there are a lot of tree trimming companies in this area.

Description of Work
They came out to tree the trees in my yard.

Wonderful experience from beginning to end. Came out within one day to do estimate, were able to schedule and complete within three days of hiring. Arrived on time, and completed job with efficiency and with great communication as to what they were doing etc.

Description of Work
Large tree over house needed to be cut back, and dead limbs cut on an additional 9 full grown trees.

It was great. They showed up at lunch, and were done before I got home from work.

Description of Work
Had two large pine trees knocked down

I was really pleased that they were able to come out quickly after a storm, but the work was careless. They knocked off a spigot in my front yard so I had to turn off the water to that part of the house so that water wouldn't continuously pour out. They also dropped part of the tree on my compost bin and crushed it, so I have to buy a new one. I was told that they'd come back to take care of both of these issues, but it was always "tomorrow" that someone would come. Never happened. I hate to leave a negative review because I was really optimistic that they would take care of these errors, since they told me multiple times that they would, but it's been weeks now and it hasn't happened. Lesson learned: don't pay for the work until errors are corrected.

Description of Work
A tree fell on my house during a wind storm and I needed it removed.

The company was very responsive from initial contact. No large problems during work. I felt I got a good deal for the work that was done. i was disappointed when I noticed a bush in my front yard had been smashed but no one reported it to me. Debris was cleaned up well.

Tree Service. Removal and trimming. State of the art equipment for the safest job possible

Capital City Tree Service is currently rated 4.3 overall out of 5.

No, Capital City Tree Service does not offer warranties.