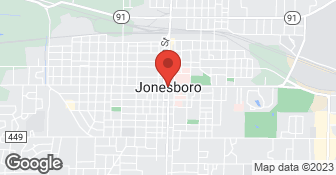 Jonesboro'a oldest and most referred moving company, here to meet all your residential and commercial moving needs.

Friends on FB recommended this place to help me move from a 1000 sf house to another house, one mile away. I gave the guy a quick description over the phone of what I had. He didn't ask many questions. He gave me a price and told me he would bring 3 guys to get it done in 3 hours. When they showed up it was 2 guys and one of them had absolutely no experience moving furniture and also kept getting winded easily. The first thing "the owner" did was basically berate me for having a lot more stuff than I described over the phone. I asked where is the 3rd guy and he explained he was short handed, but "it was going to cost me extra" because I had way too much stuff. It took 6 hours, with several smoke and water breaks. (It was a hot, muggy day.) The helper had to have directions on everything. This 61-year-old woman was busy loading more stuff than they were. When I paid the bill, he claimed he gave me a discount but when I got back to my office and saw the prices I had written down - there was no discount. I will never hire another mover "by the hour" - it will be by the job only. Oh, and despite the fact that I labeled everything, they piled all the boxes in one room! So I then had to do a lot of moving on my own.

They were fine overall. They showed up and did what they were supposed to do and didn’t break anything. They were little expensive, but all movers are. I would tell others to make sure that they clearly understood what the price would be and how many men they are going to send out whether they would send two or three, and I think I misunderstood and it may have been my fault not hers and we had to pay $25 an hour extra. They were little bit late, but they did call though.

Description of Work
I used Shaw’s Moving to move us form one house to the other.

Here at House to House our objective is to serve the Lord by serving others. We are a faith based company that is owner-operated and led. We have been in business for a year and a half. We understand that moving can be a headache and we want to make your moving experience with us a stress free as possible. Our team members are fast, professional, reliable, and trustworthy. We offer a wide variety of services that includes; packing/unpacking, loading/unloading, piano moving, gun safe moving, in home rearranging, local/long distance/across country. Whether you have a big job or small job here at House to House we would be more than happy to serve you. Were the helping hands to get you moved into your new home.  …

Bonded
Insured
All statements concerning insurance, licenses, and bonds are informational only, and are self-reported. Since insurance, licenses and bonds can expire and can be cancelled, homeowners should always check such information for themselves.To find more licensing information for your state, visit our Find Licensing Requirements page.
General Information
Free Estimates
Yes
Eco-Friendly Accreditations
No
Payment Options
Check
Senior Discount
No
Emergency Service
Yes
Warranties
No

Moving and packing services for all your residential and commercial needs.

How is SHAW'S MOVING overall rated?

SHAW'S MOVING is currently rated 2.5 overall out of 5.

No, SHAW'S MOVING does not offer eco-friendly accreditations.

No, SHAW'S MOVING does not offer a senior discount.

Are warranties offered by SHAW'S MOVING?

No, SHAW'S MOVING does not offer warranties.

What services does SHAW'S MOVING offer?

SHAW'S MOVING offers the following services: Moving and packing services for all your residential and commercial needs.