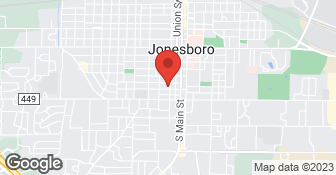 We ended up with leaks in both toilets about a year later. We assumed it was the toilet because it was underneath the toilet. Mr. Moore send his assistant to reseat the toilet that had started rocking. Approximately one year later, two years after the job, we had another leak. I called Mr. Moore several times, but he refused to return my calls. We have had a constant leak in our basement ceiling directly below the remodeled bathroom. We did several things to try and figure out where this leak was occurring. After many different fixes including installing a new roof, we found that the vent pipe in our attic had never been glued and had seperated. Since this did not leak on a regular basis, it took us 7 years to find this. Once our new plumber removed the walls and ceiling in the basement, we found that we had extensive damage to the wood in the walls. It was obvious with the damage done that it had been leaking on a regular basis for years. I am angry that Mr. Moore did not care enough about the quality of his work to come and see why I was having this reoccurring problem. The second plumber that Mr. Moore sent to my house told me that the original assistant had been let go because of the quality of his work. I guess Mr. Moore wasn't interested in fixing his problems. I am guessing that Mr. Moore himself is a top notch plumber since I had no problem with his work. He just doesn't stand by the work of his assistants.

Description of Work
Mr. Moore installed two hot water heaters. His assistant plumbed our bathroom remodel, which contsisted of a shower, toilet, tub and 2 sinks. We later had the toilets switched out with another toilet in the house,

They did a great job! They had to go and get the part that was needed, but overall they were very professional, timely, and inexpensive.

They do an excellent job, and I definitely will use them again.

He does great work. The price is right, and he is very professional.

Description of Work
He did some plumbing work in an old shower.

How is Moore Plumbing overall rated?

Moore Plumbing is currently rated 4 overall out of 5.

No, Moore Plumbing does not offer eco-friendly accreditations.