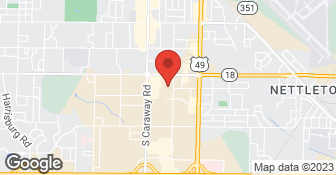 I do NOT recommend Lowe's roofing service. We paid almost $8000 for a roof and ended up with a pieced together mess. You can stand under the edge of the house and see the wood separating under the roof and it has only been on for a month. We have spoken with the store and the corporate office and they were supposed to come back and fix some of the problems over two weeks ago and haven't come back. This after waiting almost 6 weeks after the first appointment for them to start putting the roof on. We were charged for 20 pieces of plywood and the roofers only used 3. We did not receive a credit. We financed it through Lowe's and had to start making payments before the roofers even started work. The whole experience has been a total circus and even after calling the store and speaking to regional representatives we still have not received help. Poor quality work and then a total failure in customer service.

Description of Work
Roofing. Hired them to remove our old roof and install an entirely new, the top of the line that Lowe's offered, roof.

Description of Work
I DID NOT USE THIS COMPANY

Description of Work
I have bought items at lowes for years and had 1 room of carpet installed from them by their installer. I am satisfied with their service. It was good...Tim

8/16/2014 - scheduled measurements - no one was at the desk or responded to the call button. Flagged down a manager and it took him over 10 minutes to get an associate to help 8/26 - man came to measure rooms, told us we could order carpet next day 8/27 - tried to order carpet - store said they could not order it yet, the measurements were not worked up yet 8/29 - tried to order carpet - store was dis-organized and made several phone calls to find out if we could order it yet. The answer was yes. It took over an hour to order the carpet. We were told it would be in around 9/5. 9/6 - stopped in to see if carpet had arrived. Was told it would not be there until 9/15. 9/11 - received the call the carpet was in. Scheduled install 9/16 - Installer arrived at 9am. He did a good job, but was there until 7pm. 10 hours to install carpet in 3 bedrooms. I thought it was quite excessive.

Description of Work
Carpet and installation

They have a fairly good selection and they people there are always really nice.

Description of Work
I used Lowe's in Jonesboro to buy some home improvement stuffs.

I use them pretty much exclusively unless the prices are quite a bit cheaper elsewhere. I use them for everything. I have a couple of rental properties and I've spent probably $3,000 in the last two months. They seem to have more variety and are better stocked. They seem to have better prices than anyone else. I will definitely continue to use them.

Description of Work
I used Lowe's for electrical and light fixtures. I also bought some shrubs and flowers.

I recommend them all the time. I will probably use them in the next week or so.

Description of Work
I use Lowe's as my hardware store. I bought a sack of bug poison.

I am very satisfied with Lowe's. They did a thorough clean-up.

Description of Work
I went through Lowe's for roofing and new shingles.

They give good service. The people are good and honest.

Description of Work
They put in a high stool toilet and they also installed a new sink.

They did a great job for me. They were a bit tardy in their responsiveness. I would use them again in the future if I needed to.

Description of Work
I had carpet installed by Lowe's – Jonesboro.

Price & Co. (Formally 911 Roofing Experts) is your 5-star rated, trusted, local roofer serving the Mid-south! We are also certified with Angi's and Houzz! We support the local work force by using locally manufactured Owens-Corning shingles and we hire local. Whether you are buying outright or want to file an insurance claim, we are here to help! Our experience with insurance claims is unmatched - our founder has 10+ years of experience with insurance companies and the claims process as a former insurance adjuster. Call the today today! | Refer a friend, get $250 VISA gift card!  …

How is Lowe's - Jonesboro overall rated?

Lowe's - Jonesboro is currently rated 4.2 overall out of 5.

What days are Lowe's - Jonesboro open?

No, Lowe's - Jonesboro does not offer eco-friendly accreditations.

What services does Lowe's - Jonesboro offer?