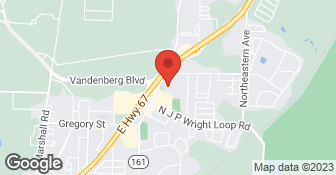 Purchased sink on a Monday and was promised an appointment would be scheduled within 48 hours. Four days later Lowes had to get the plumber on the phone and schedule. He showed up at 630pm and took the old sink out. After cutting pipes off at the wall he said my sink had to be replumbed and got upset with what the Lowes employee picked out for the install. I went to get food and when I came home 15 minutes later my father, who had been under anesthesia that morning, told me the plumber left after realizing the sink we bought would not fit. He also asked my father to help him lift the new sink in because he couldn't lift it. He made no plans to come back and install a sink and left a trash can under our newly cut pipes which were still dripping water. Three days later someone else shows up to fix the sink. He was not a licensed plumber and spent most of the the time asking the plumber what to do about issues he kept having. He did not caulk around the sink and the hardware was wobbly and poorly installed. I had to pay another plumber to come fix their work. Lowes wound up refunding the entire install fee as the person who showed up to my home was not vetted by them and might as well have been someone off the streets. This install was a nightmare.

They had broken a lot of bricks when they were delivered and they were broken significantly. I loaded them up and took them to the store and there were a lot of bricks. When they saw how many were broken, they gave us a significant discount due to the inconvenience. They delivered the other bricks directly to our home. Although there was a delivery charge, it was set up in such a way to where the discount figured in the delivery charge as well as our bricks.

Description of Work
I also hired them to deliver bricks for a raised flower bed we had built.

It would have been considerably cheaper if we wouldn't have gone with a 6 foot fence but our dogs jump quite high. While the project was going fine, I noticed a bolt that had attached a bracket on our house had broken and was sticking out of the brick. The bracket had not attached since it was broken and was hanging off the house. It did not look good. They asked that I send some pictures and I did. Five days later the gentlemen who we had worked with at Lowe's came back out with one of his guys and repaired the bracket. It's not entirely as nice as it would have been when it was first installed if done correctly but it does look great.

Description of Work
I had hired them to build a 6 foot fence around our yard.

The workman from Lowes showed up promptly and diagnosed the problem quickly. Once the part was installed, the dishwasher worked like new. The only problem I had was that he left the dishwasher disassembled for two days while waiting for the part to arrive. He did clean up very nicely after completing the job.

Description of Work
The serviceman from Lowes came to our home and replaced a broken part on our dishwasher.

Lowes did a great job. We set up a time when they would come out and put in the doors and they were very prompt in showing up at that time. He did the job in a very timely matter.

Description of Work
They replaced two doors on the front and back of my house.

The contractor did an excellent job removing our old door and installing the new one. It hung nice and even and looked very good. The door was a nice quality door. After they got the door installed, they cleaned up their mess. I can't remember the price, but I remember it being reasonable.

Description of Work
They replaced my front door with a steel security door with one small window. They also hauled my old door away for me.

It was a very good job and rather promptly done. The crew was very respectful, and highly skilled in their line of work. We really liked the finished product very much, and it really added to the beauty of our home.

Description of Work
I had them install a wooden French door for me. They removed and hauled the old door away.

Handyman offering residential and business services. A few of the services we offer are general carpentry, flooring, tile, paint, drywall, concrete repair, plumbing repair and more. Free estimates for any job, timely service and professional owner-operator with over 20 years experience.  …

How is Lowe's overall rated?

Lowe's is currently rated 4.4 overall out of 5.

What days are Lowe's open?

No, Lowe's does not offer eco-friendly accreditations.

What services does Lowe's offer?