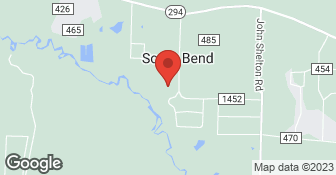 Work was not performed. This estimate was more than double the other estimates. However, I have a friend who used this company for a big addition to their home and did an excellent job. I believe that our job was too small for them and we received such a large estimate. Basically, that if they were going to take time away from larger jobs to do this little one, then it needed to be worth their time. I would probably get estimates from them in the future for larger projects.

Description of Work
Showed up on time and was very professional. He gave an estimate for building a full bath in part of our house (not adding square footage), replacing all interior doors from slab to paneled, updating one bathroom with new tub/shower combo, new light fixture and fan in master bath.

Description of Work
Soon after we left home for 2-1/2 weeks, a shower rod fell down, hit the hot water lever, turned it ON, and the hot water ran for 12-13 days. Most of the water went down the drain but a huge steam cloud formed and condensed on every surface in the adjacent rooms. We returned late in the evening to a veritable rain forest: water drops falling from the ceiling, water water everywhere, and mold mold everywhere. In desperation we called Ron Head and early the next morning, he and his crew arrived. Over the next weeks they removed and replace watersoaked sheetrock and insulation, refinished hardwood floors, replaced trim and tarnished fixtures, repainted, and and and. Their work was a huge bright spot in a nightmare that included the incredible devastation along with an insurance company that fought our claim at every level. Finally our claim prevailed, but only after taking it to the state insurance commission and after Ron Head spent many hours on the phone with the agent and working on paperwork. We are so appreciative of his crew's work which proved the truth of what one of his crew had said at the beginning: that we would like the house better after it was repaired than before. That was true even though we liked it very much before.

For a week they worked our job to clean up and stabilize the situation. Then, the crew went back to the other job while subcontractors - sheet rock, etc. - continued to work. Mr. Head was easy to work with and willing to spend time explaining and discussing our options at each stage of the work. I would put his company in the top 5-10% of all businesses that have worked on our houses over the years. He is completely honest, completely trustworthy, and completely fair.

Description of Work
We had extensive water damage while on a two-week vacation. We called Ron Head and he came over immediately, pulled his crew away from a really big, important job they were already working on.

I would not use Head Construction due to their lack of professionalism and response to customer. They did not identify company when answering company phone. Did not follow through with anything I had requested. Stated that I should use someone "local" rather than calling them. Head Construction is actually located 40 miles closer to my home than the company that I have now hired to do the jobs.

Description of Work
I called the number for Head Construction provided by Angie's List. A man answered saying only "Hello". I asked "is this Head Construction?" The man replied "yes, it is." I then explained that I needed flooring installed in my home (whole home) and several other later jobs, for example new back doors, deck, pool fence, countertops, etc. The man asked "where do you live?" I told him "in Beebe" (15 minutes from Jacksonville). I was shocked when the man then said "well why don't you get someone up there in Beebe to do the work?" I explained to him that there is not a lot of choices here in our town and I was interested in getting a few estimates and then making a decision based on pricing and professionalism. Head Construction sent a person out to give me an estimate on new granite countertops even though I had specifically stated that the flooring was top of the list. Head Construction also had their flooring installer call me and schedule an appt for the following Saturday morning at 10am. The man never showed up. Head Construction was very unprofessional and did not follow through with anything that I had asked other than sending out a person to give me an estimate on countertops (which I never received the quote via email as stated by employee). I would not use or recommend Head Construction in the future.

The job went pretty well and it was all a good experience. We had 2-3 people bids for the job and we liked the interaction with Ron. We liked his price and the way he handled it. He wrote up what he planned to do along with the price, and whenever there were any alterations, he would say that he could do that and tell us the cost. He would also tell us whether any of the things we asked would be a problem and difficult to do. So, we always knew where we stood and were never surprised. He was extremely easy to work with and the work was always good. He completed the job within the timeframe indicated at the beginning. He also came back to take care of any issues. He had referred other people who were planning on using him to come by and take a look at the work he did here and I believe he got a lot of business by showing the quality of work that he had done at our place. I have recommended him to many people.

Description of Work
Head Construction did room addition work for me. They added about 1000 sq feet to the living area and raised a roof overhead to make my house into a two-story building. They had to remove the old roof and put in a new roof and floor. They had to build walls and do the plumbing and heating and air conditioning work. They made the cabinets and sub-contracted the painting work.

The end result was spectacular, an assessment that every visitor confirms. From the beginning it was apparent that Ron had experience, had good ideas, and would be easy to work with. I developed the plan, with his help, as construction progressed. He agreed with most of my ideas, but if not, would say, "That will be a problem." Very low key, very easy to work with. The hardest part was finding brick to match the old brick on the existing part of the house. Ron brought numerous samples - a sample being a dozen bricks to get the full range of colors of the old brick - and stacked them up to compare with the existing brick. We selected one and the bricklayers put up one side of the addition. My wife came home and said, "Take it down." According to Ron this was the low point of the project because he had already scoured every old-brick source in the area. Then, he was driving along and saw workers tearing down an old brick warehouse. He brought some samples and the match was good, not perfect, but good enough that no one notices unless we point it out, and we no longer notice either. His pricing was very fair. The original contract described what they would do for the contract price. When we added something, they increased the price by materials and very reasonable labor, or just by his cost if he subcontracted it. He had used his subcontractors for years so he could count on them, and we found that to be true. There was almost no disruption to our daily schedule during their work.

Description of Work
They added an office/study/theater room, a bathroom, and a storage closet on the second floor above the garage. This involved raising the roof in that area, ie, much more than just finishing an attic. Ron and his partner did all of the carpentry and subcontracted the plumbing, electrical, painting, brick and sheetrock work. Ron and partner also made a beautiful, stained wood 27-ft floor-to-ceiling bookcase, built-in cabinets for storage and for home theater components, and a matching office desk custom made for computer, printer, etc.

They were great. I couldn't have asked for a better experience. We had an awful time trying to get people to come out to give us an estimate. It was just wonderful. They would come up on a problem and discuss it with me. It was great!

Description of Work
I had a "river" running through my downstairs and they basically gutted and redo the whole area. They did beautiful built-in cabinet work. They put in 3 new windows. My house his brick. They painted and did tile work. They put in a French drain.

Businesses and homes that fall victim to these disasters need a company that understands the damage and knows how to clean it all up and make it look as if nothing ever happened. Our team knows water, mold, and fire damage and will own every step of the rebuilding process.  …

How is HEAD CONSTRUCTION overall rated?

HEAD CONSTRUCTION is currently rated 4.8 overall out of 5.

No, HEAD CONSTRUCTION does not offer eco-friendly accreditations.

Are warranties offered by HEAD CONSTRUCTION?

What services does HEAD CONSTRUCTION offer?

Are there any services HEAD CONSTRUCTION does not offer?