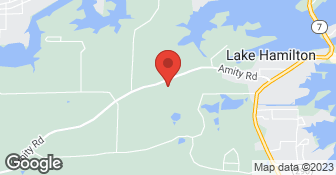 This job only took two days, even though it was a large roof. The workers did a very good work, and the resulting roof is attractive. However, they did another thing for us that we appreciate even more. We have had trouble with the roof leaking around the chimney ever since the last roof was installed some ten years ago. The original roofers tried unsuccessfully to fix it a couple of times, and we hired two more roofers over time who were also unable to fix it. I told Mr. Barnett about the problem, and he looked carefully at the chimney and flashings before deciding what to do. Then he purchased special materials just for that portion of the roof.The result was, we had a fierce rainstorm yesterday that would have drenched the interior wall of the chimney before. This time the bricks remained dry; the drywall ceiling did not get soaked or even dampened. We are overjoyed to have this annoying and potentially catastrophic problem fixed at last! Two more things I'd like to mention--When Mr. Barnett came to do his estimate, we showed him a torn shingle on the roof of our shed and asked how much it would be to fix that. He immediately got his ladder so he could look at the problem, then got a few supplies and fixed it at no charge. This was of course before he even knew if we would hire him for the big roofing job! The second thing is--nails! We have dogs who seem to have very eclectic appetites. We've had to have the vet remove rocks, Nylabone fragments, chewed up bedding, sticks, and other detritus from various parts of their digestive systems. They have never eaten nails, but they've also never had an opportunity to do so. We were worried they might decide to taste-test the ones left in the yard or else get them in their paws. The roofing workers must have collectively spent two or three hours going over the ground to remove nails, without making a single complaint about it. In summary, I would not hesitate to recommend this firm to other customers. They were competent and easy to work with, and the roof is beautiful!

Answered the phone, set a date, called to tell us what time he was arriving. Arrived at that time, did the work.

[Member name removed] you must have mistaken my roofing company with another roofing company. I have never done a job in Bella Vista,Ar. My jobs are in the Hot Springs,Hot Springs Village and Little Rock area. Please look into taking your review off of my listing and placing on the right company. I take pride in my work and reputation. As my other reviews show. My names is James Barnett and you can call me at 501-580-1666 if there is any question to who we are.
5.0

They did a good job and they communicated. They stayed in contact with us through out and it was painless.

Description of Work
They replaced the shingles and fixed the damage of the roof.

He came and made an estimate on our roof. He brought samples of shingles so that we could choose the color and type of shingles we wanted. He explained the contract. He told us when the materials would be delivered to our house. The workers were very professional and timely. They cleaned up the old roof materials and packaging for the new materials. We were very happy with this company. He guaranteed workmanship for 5 years.

Description of Work
Replaced roof on our house.

Description of Work
My overall experience was very good. It took some time to connect initially, but once the job was scheduled, everything was done in a timely fashion and the roof looks great!

He did the job in 2 days and also cleaned my gutters out for no charge.

Description of Work
He took off old shingles on 2/3 of my 2 story 4,000 square foot house. Replaced any decking that needed replaced and cleaned up all old shingles,replaced with new shingles. I also had a large tree limb over hanging my high pitched roof and he removed it for me.

Job well done. Everything do as contract written. Owner and workers were the best! No problems whatsoever!

James Barnett is a real pro. His crew worked their tails off. Very responsive to any questions and there when you need him. John

It was a good overall experience except we had trouble matching our roof with our next day neighbor. Our neighbor also thought Barnett did not do a good job, but they did -- and it was not Barnett's fault. He was really concerned about his reputation. We thoroughly discussed the job before starting and he normally wanted money down but he told us we did not have to do that. He worked with the management company and our homeowners association making sure the color of shingle was appropriate for our complex and met their standards. He was very accommodating and we were very happy about his work. He did a great job and had a reasonable price; it was not the cheapest but was reasonable. He got back to me right away and was a real nice guy.

Description of Work
I used James Barnett of Barnett Roofing to re-roof my house in Arkansas.

MR. BARNETT WAS VERY CORDIAL, PLEASANT ,PROFESSIONAL AND HONEST. I WOULD HIGHLY RECOMMEND HIM TO ANYONE WITH ROOF DAMAGE.

Description of Work
MR BARNETT EXAMINED MY ROOF AND DETERMINED I HAD NO MAJOR ROOF DAMAGE. HOWEVER, THE SHINGLES WERE LOOSE AROUND THE VENTS. HE GLUED THEM DOWN WITH A ROOF COMPOUND AND DID NOT CHARGE ME ANYTHING.

Excellent, from estimate to completed product. Was within $100.00 of my adjustor's estimate.

My experience with James Barnett was completely satisfactory. He is a very nice, polite business owner who made sure everything was done exactly as we agreed. I would be completely comfortable calling on him again in the future with any kind of roofing problems that may arise and highly recommend him. His work crew was outstanding and I was completely satisfied with their work.

Overall, it was a good construction experience.

Description of Work
We had hail damage from the storms. Barnett Roofing was prompt giving us their bid and prompt arriving to install out roofing. There were 3 areas needing repair on our roof. These were repaired professionally and in the time frame of finishing the job. Mr. Barnett and his employees are polite and did a good job of talking with us about the job. The clean-up was finished before they left the job site and it was done very well. We recommend Barnett Roofing.

Great! Just as stated above.

Description of Work
We called Mr. Barnett after the tornado when our insurance company highly recommended him. He came right out and gave us a estimate and samples of different roofing material. We accepted and he said that his crew would be there in two weeks. In exactly two weeks they came and started on the house. It was finished in 2 days. His crew cleaned the yard and swept the deck before they left. He came back the next day and inspected the roof and said if we had any problems to call him and he would be here. We enjoyed working with Mr. Barnett. It was so nice to have someone come when they tell you and not waiting four weeks instead of two for them to do the job. His crew worked hard and were very courteous. We would recommend him to anyone.

Hello I'm Johnny Harrison, proud owner of my business Performance Asphalt. We are a locally and family operated owners asphalt maintenance and paving company that offers any and all asphalt inquires! Being a 4th generation asphalt contractor we strive to bring the experience, workmanship, and quality all projects deserve! Satisfaction guaranteed!  …

VBA paving brings the experience and the right equipment for all types of paving projects. Whether you're looking for a contractor to install large commercial parking lots, or just need simple residential sidewalk repairs, we have the team to handle your project. VBA Paving is dedicated to bringing high-quality materials and efficient crews to each job to complete your pavement installations, repairs, and maintenance projects. We are ready for projects of any size. Contact us today for additional information or to request a quote on your project.  …

Bonded
Insured
All statements concerning insurance, licenses, and bonds are informational only, and are self-reported. Since insurance, licenses and bonds can expire and can be cancelled, homeowners should always check such information for themselves.To find more licensing information for your state, visit our Find Licensing Requirements page.
General Information
Free Estimates
Ask for Details
Eco-Friendly Accreditations
No
Payment Options
Check, Visa, MasterCard, Discover
Senior Discount
No
Warranties
Ask for Details

How is Barnett Roofing overall rated?

Barnett Roofing is currently rated 4.9 overall out of 5.

What days are Barnett Roofing open?

No, Barnett Roofing does not offer eco-friendly accreditations.

No, Barnett Roofing does not offer a senior discount.

Are warranties offered by Barnett Roofing?

No, Barnett Roofing does not offer warranties.

What services does Barnett Roofing offer?