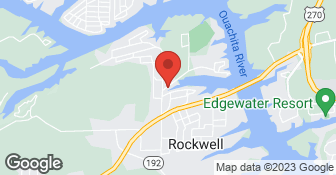 This was an existing house that had windows that leaked from the Day after the owner took ownership of the house. The house was built by Kelso Company of Hot Springs. There was a lawsuit against Kelso Construction, and a settlement was reached. The windows were changed by another contractor CCS Construction, and it still continued to leak, because of incorrect installation of windows and not using proper sealing material. The owner decided to install an EIFS system. Aurel V. Construction did a superb and thorough job of removing siding, sealing the windows, and installing the EIFS System. He worked directly with the technical experts of the Total Wall System and also with a building inspector. We have had several storms and the windows have not leaked even once during construction. The Company - Total Wall has confidence with Aurel V. Construction, that they are giving me a 10 year warranty.

With a mission that started over 30 years ago, Community Builders has grown from a small family owned business into one of the most respected names for Oklahoma and Arkansas remodeling. By offering customer-first services and products from industry-leading manufacturers, we deliver value that you can count on for decades to come. Contact us to discuss your next project today!  …

Insured
All statements concerning insurance, licenses, and bonds are informational only, and are self-reported. Since insurance, licenses and bonds can expire and can be cancelled, homeowners should always check such information for themselves.To find more licensing information for your state, visit our Find Licensing Requirements page.
General Information
Free Estimates
Yes
Eco-Friendly Accreditations
No
Payment Options
Check
Senior Discount
00.00
Warranties
Yes

Aurel V Construction is currently rated 5 overall out of 5.

No, Aurel V Construction does not offer eco-friendly accreditations.

No, Aurel V Construction does not offer a senior discount.

Are there any services Aurel V Construction does not offer?