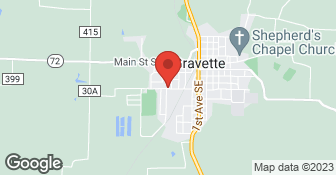 With over 30 years in the business, we do it all - if it can be ruined odds are we can fix it, or replace it. With over 20 years of brick laying experience don't forget to ask about our custom mailboxes and masonry repair. Free estimates, references and good 'ole hospitality. We pride our selves in our work and our customer service

Quoted 2 weeks, took 10. Still wasn't complete in its entirety, but we had to move in. Several examples of poor work include, not finishing items, not painting the underside (sitting on the floor and looking up, none of the underside of my steps were stained, nor the sides where it meets carpet, same with front door and cabinets) drip marks on everything, overspray on walls from spraying doors and cabinet doors in finished rooms, spotted doors and cabinets from touch ups, messy hand work on front door and stair rail, powder room trim never painted. We did all the caulking to help speed him along. Overlapped paint in entire foyer. You can't paint half a room and pick up the other half a month later and expect paint to match. Also, gaps between wall paint and ceiling paint that were left unpainted. Overspray on fireplace bricks, several sections in kitchen missing clear coat on cabinets. I repainted an entire bathroom ceiling myself because it was painted with a flat, it should have been a semigloss like the walls. When I questioned why the contrast in color, I was told it was just casting shadows. I was told the spotted master bath cabinets just needed time to cure. Four months later, spots still there and they've been repainted. I have sprayer marks running across the entire length of my crown molding. I could go on and on and on. Nothing was completed in its entirety, on time, or looks professional.

Description of Work
New construction paint, we needed the entire interior, as well as cabinets painted.

Project was supposed to take 2 weeks. Took 10. They had issues working around plumbers, tile installation and electricians but we couldn't put the house on hold for 3 months to accommodate them. Their work was extremely sloppy, and I now have a house that embarrassing to display. They oversprayed newly painted walls with other colors, ruined multiple cabinets not knowing how to paint correctly the first time, he doesn't know how to stain properly, either. They interchanged between flat and semi gloss that were the same colors so some spots are shiny while others aren't. They touched up with the wrong colors and even left spots on cabinets from not stirring paint properly. You don't dare sit on the floor and look up bc he didn't paint the underside of anything, cabinets, stairs, hand rails, etc. Everything in my house will eventually need to be fixed or repainted. Don't use this company, it's not worth the time or energy. Worst building experience ever.

Description of Work
Painting all interior, as well as cabinets. New construction.

These two "painters" were a fraud-- charged an exorbitant amount for truly inferior product (paint) and horrible workmanship. Owner, Don Ellis, stated they guaranteed their work, yet when we discovered they didn't paint around fixtures and repeatedly called to remedy, there's a promise to come correct --without fulfillment. Plus we are still cleaning up the spills and drip mess. Still wondering how anyone can make $4700 in labor, in approximately 8 hours, and expect customer approval. Hiring this contractor without research or comparison is the biggest regret of my small home improvement project! Don't be taken to the cleaners like we were!

Description of Work
Repainted kitchen doors and drawers at their paint shop. Project was completed as agreed too. Had some issues with some of the finishing which they gladly corrected.

arWe called them scheduled a time for an estimate... they showed up on time and went through our house with us... thye were very thorough with their questions as to what specificaly we wanted and they over all look and feel we wanted the house to have... we then discussed price and told them about eh price point we wanted to stay at... after agreeing that they could do this for us they scheduled another time to come by with samples and color schemes... after that everything went like clockwork... they showed up on time every day were very polite very clean and did excellent work!!

Description of Work
Complete Remodel of our kitchen, master bath and interior paint... They were prompt curtious and made us aware of any and all possible expenses so that we could tailor our price and go with lower cost alternatives instead of just cutting corners everywhere to stay in a price range... we could not be happier with our house now... I use anything as an excuse to invite people over to look at our home now.

Who's Next Pressure Washing

Welcome to Who’s Next Pressure Washing services we specialize in exterior cleaning services and customer service nothing else matters than making sure we leave our clients satisfied at the end of every project.  …

Family Owned since '14 Moran's Painting will give you a personable experience with quality work and nothing less!  …

We offer quality and affordable painting services for interior/exterior residential and commercial projects.  …

Ellis Painting & Construction is currently rated 3 overall out of 5.

No, Ellis Painting & Construction does not offer warranties.