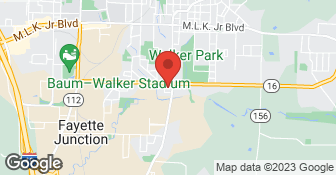 Since 2009, Little Guys Movers has been working hard to serve the Fayetteville, Arkansas community and all their moving needs. As fully insured movers for hire with over 20 years of experience in the moving industry, we know what it takes to get the job done right the first time. Our philosophy begins with putting people first, which makes us the local or long-distance moving company that you can rely on. From piano movers to expert packers, we’re the Guys you’re looking for....

Call us today for all your cleaning and moving needs!  …

”Long distance moving from or to the west coast only. No local service outside Portland Oregon, Los Angeles California and Seattle Washington.” Local and Long Distance Moving & Storage. Household, Commercial, Corporate services available. Our Mission is To exceed expectations on every move. We live this day in and day out. We provide actual full time movers, not day labor like other companies. Our service is top notch and fully efficient. Our trucks are perfectly equipped for moving with Pads, dollies, Plastic and much more. Our employees are drug tested, trained and seasoned to be the best you will find. This is how we keep our ratings high and claims low. Long Distance Moves take place either from our long distance hubs across the West coast. We are proud to provide a service that no other company offers; Dedicated Trucks. This means that your belongings are loaded on the truck and not combined with anyone else’s items. They are not transferred to other trucks or facilities in route which causes damage and loss of items (typical with van lines). We have a set loading day and unloading day. This is by far the safest way to ship. Our interstate rates are per 24ft moving van that holds up to 8,500lbs or 1400CuFt. Some customers require one truck and some require more. One truck holds the average 1800SqFt.  …

Little Guys movers has the BEST customer service hands down! We have used them twice and have been very happy both times. The second time they went above and beyond to make sure I was completely satisfied.

Description of Work
Moving heavy objects from one home to another

Dustin, Autumn, and Blake were awesome. They arrived on time, and were professional, and we could tell they knew what they were doing. When it was determined that they would need some extra help loading our piano, they immediately called and got the help they needed. We would highly recommend them and would use them again ourselves.

Description of Work
They moved us from Rogers to Eureka Springs.

Alex and his crew helped me move a four bedroom house in one day, and they were friendly and courteous, too! They were very resourceful, and helped us decide how to safely organize what items and where during the move. When you have a lot of stuff, it can be overwhelming deciding what to put in the truck first. They helped take the anxiety and stress out of the move. We weren't completely boxed up when the guys got there, so I highly recommend that you box everything that you don't need, and keep a suitcase of necessities for each family member. Little Guys took down two custom-made bunkbeds and safely transported our huge heavy, side-by-side fridge, also a stainless steel fridge with a freezer drawer, and a front-loading washer and dryer set. When they put everything in the new house, they went above and beyond making sure everything was secure and properly installed. Thank you to Alex and his guys for being so patient with us, two grown-ups who are clueless in moving, and our two children. Our two-year-old son just adored you all! Thank you for being so patient with him! Sincerely, Pam

Little Guys Movers were simply awesome! This was my first time using this moving company, and I am so glad I did. Scheduling was easy, and everyone with whom I interacted were polite and professional. Elijah and Blake showed up early and quickly moved my items, handling each box with extreme care. I would definitely hire this company again and would recommend them to anyone who's looking to move locally or even nationally!

Very well....few complaints: one minor nicked item and a lack of helpful labeling of some boxes. But a very upbeat, energetic crew!

Description of Work
Packing up and moving our essentials.

The quote process was simple and I was able to get service on short notice on the requested day. The only issue I had is that I requested 3 movers, but one of the movers did not show so I only got a 2 man crew. However, the hourly rate was less and the two guys did an excellent job and the cost was comparable. Overall, they did a good job and I would recommend them.

Great experience! Justin M and Lydia R were my movers and they were the utmost example of professionalism and courteous service. Would not hesitate to use Little Guys again.

Who says size counts? The people who did the work were amazing. They used their brains not brawn to move even the heaviest of items. Not one scratch on anything, appliances, walls, floors, nothing. To say these folks work hard is an understatement. They moved our goods from storage into our home and were really concerned about where to place things, so boxes that belonged in the kitchen were placed in the kitchen, etc. They offered to move furniture around after everything was in the house, but we declined since we didn't know where everything would eventually "live". Each crew member had a great attitude and worked tirelessly until the job was done. I was amazed and how proficient and efficient the crew performed their work. It was so nice to see these young [and not so big] people do this literal Heavy Lifting! Good Job Little Guys!

Description of Work
Moved most of an entire household of items out of two storage units into our home. They also moved the items that were to remain in storage into a different/smaller storage unit.

First off, I called Little Guy's Movers after calling two other well-known-big-name movers in the area and not even getting a call back - LGM answered the phone right away and I explained that I only need the extra heavy items from my duplex in Bentonville moved into our new home in Rogers. We were moving the boxes, etc ourselves to save money - but they were to move the couch, chairs, beds and mattresses, etc. He was extremely friendly on the phone and asked me to go room-to-room telling him what items would need to be moved. I did so and after that, he emailed me an itemized quote within a few hours. Quote seemed reasonable to me (about $850) - it was a flat rate and he said they would disassemble, assemble back, etc. When they showed up (right on time!), I met three of the nicest guys ever. We used a team of Zach, Justin and Alex. They were extremely professional and polite. Folks, I mean these boys had MANNERS! I know that shouldn't be so unusual but in this industry, it really is. When they arrived, my husband had already moved several of the smaller things I mentioned over the phone so at the end, they took that off the price. While they were here, they did not stop moving. These young men were careful and treated all of our things with respect and concern. When they arrived to the new house, they asked me where each item was to go and then even offered to move it around if I "didn't like the way it looks there." I mean, seriously!? I was so impressed, and have referred several others to them since then. I wish there were more companies that treated customers so respectfully and with value. I will use them again, and continue to suggest others do so. They would've been worth it if the price was doubled.

Thank you so much for your kind words! I will pass that along to Zach, Alex, and Justin, we're very proud of all of our movers and the service that we provide. Thank you so much for referring us! We try our best to give the most pleasant moving experience possible, your move should be that last thing you worry about on such a hectic day. Whatever you need in the future just let us know. Thank you! Jake L.
5.0

This is the 5th time we have used Little Guys. As usual everything was above expectations and fairly priced. Take my word, don't waste time calling around, just use Little Guys. They are fantastic.

Description of Work
cleared out storage unit and brought back to our house. Moved various items throughout house.

Thank you for such a great review! We always love doing business with repeat costumers, whatever you need in the future just let us know! Jake L.