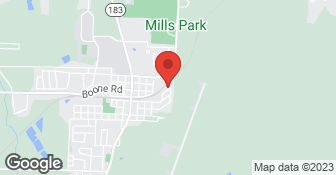 We face lift properties to help them sell.We do kitchen and bathroom remodels.we do small jobs like install new doors,repair decks,repair siding. We do new additions like family rooms, open interiors up, expand kitchens and bedrooms.

My initial impression of Jerry Miller was positive when we met to discuss the project. In fact we made some changes to the way the new garage would be placed on the property based on his suggestions. I supplied all of the detailed information and drawings to all of the potential contractors in March of 2013 and I got a reply back from Jerry saying it would take a couple of weeks to provide his estimate unless we were in a hurry. We were not and I told him that would be fine. In early May, after not receiving any bid, I queried him as to whether New Age were going to bid on the project and he replied right away that they were interested and he would send his estimate when it was complete. However, I never heard from him again until the first week of August when he sent me a bid without any comment on the fact that it had been three months. By this time, we had already selected a contractor and the garage is complete! Again, we had assumed that his company was not interested so I had not let him know when a contractor was chosen. The proposed price in the bid was also very high, more than twice all other bids. So again, my guess is that Jerry and his company would do a good job; that during our initial visit he seemed very professional and discussed the project in detail, bringing up things I had not thought about. I realize there may very well be extenuating circumstances that I am not aware of, but without any explanation for the long delay in communication, would not recommend using this company.

In business since 1991 with the highest certified technicians in Arkansas. We are a family oriented business with a focus on customer service, and strive to put a smile on your face.Pay at the time of service. We also service commercial locations. Contact (501) 690-3825 to schedule your appointment today!  …

All statements concerning insurance, licenses, and bonds are informational only, and are self-reported. Since insurance, licenses and bonds can expire and can be cancelled, homeowners should always check such information for themselves.To find more licensing information for your state, visit our Find Licensing Requirements page.
General Information
Free Estimates
Yes
Eco-Friendly Accreditations
Yes
Payment Options
Check
Senior Discount
No
Emergency Service
Yes
Warranties
Ask for details

We offer almost all types of repairs. We do any major inoprovements, even including building garages, storage building, fences etc.

No major electrical or plumbing work.

New Age Construction is currently rated 3 overall out of 5.

No, New Age Construction does not offer a senior discount.

No, New Age Construction does not offer warranties.

New Age Construction offers the following services: We offer almost all types of repairs. We do any major inoprovements, even including building garages, storage building, fences etc.

Are there any services New Age Construction does not offer?

No major electrical or plumbing work.