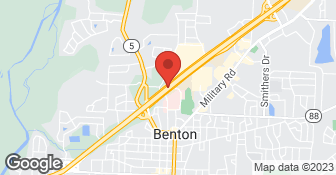 We provide personable, effective and outstanding pest control service for our valued customers. We’ve worked to instill our strong family values and high quality standards into our business practices and company culture. We believe in giving back and helping our communities, we feel passionate about the high level of quality and integrity we provide with each service. Our highly trained team of professionals exceed state standards on continual training and educational courses. McCauley Services also ensures that our staff is friendly, knowledgeable and trustworthy. In fact, we run extensive background checks, drug testing, driving records and other qualification checks

The problem was taken care of in a friendly and professional manner. They had the best rates and the very nice serviceman has returned twice to make sure things were good.

Description of Work
Had a roach and rat problem.

Thank you so much [Member Name Removed]! We appreciate that you chose McCauley Services and that you took the time to leave your feedback. Please let us know if we can be of additional service, or if there's anything we could do better! Have a blessed day!
5.0

N/A/ No work was completed.

Description of Work
Contacted McCauley Services for pest and termite protection. They were not able to provide a termite contact because they use the in ground bait stations and we could not use them at our house. I must say they were great and I wish they could have used them. The guy offered to look at the house and see if there were any issues that we had not noticed at this time.

We moved from Florida, home of giant flying cockroaches,and I thought we wouldn't deal with that in North Little Rock, but I was wrong. I don't think my landlord had ever treated the house since she owned it so it was pretty bad. I contacted McCauley to get an estimate after talking to a couple of other companies. They were extremely responsive, answered all my questions ahead of time, and gave me a reasonable estimate so I scheduled a visit. Also, I try very hard to stay away from using pesticides and told them that and they respected that and suggested the treatments that would require the least long term pesticides and additional treatments. The visit included dusting the crawl space, sprayed around the foundation of the house, inside the house along all the walls and behind furniture/appliances, and the garage. For the first few days after I had a lot of bugs (babies, adults, and everything in between) still coming out and dying but it slowly got better but we will still need them to come back out to follow up. I have talked to their office twice with concerns that we still see some bugs which they agreed shouldn't have been happening so soon after but due to scheduling constraints on my side I haven't been able to get them back out but will have them back out to see if we can try a couple of more options.

They have always been prompt and I have just been satisfied with them.

They came out promptly and their technician was extremely friendly. He seemed to know what he was doing.

Description of Work
We use The Bug Man for pest control. I have them come out quarterly.

We've been using them for 9 years. The gentleman who comes to our house is very personable, hard working, and does excellent job. If we find anything or have something subsequent to his visits, he will come back. We've had very little, if any, bugs in our house.

Description of Work
McCauley Pest Control Services sprayed around the entries and brushed down all the parts of the house that they can access to remove all the cobwebs, bugs, and things like that.

I am satisfied with the services. He comes promptly once a month and anytime we need him. We haven't actually had to call him but he indicated to us that if in between visits we found the service didn't work then we could call him and he would come back out without charge. $30 doesn't seem to be a lot of money so it seems like a good price. He eradicates the area for roaches and bugs. I don't know a lot to compare the work to.

Description of Work
The Bug Man does my pest control.

I had a horrible infestation of the small brown roaches, I think they are called German Cockroaches. I had tried just about every retail remedy that I could. I called and priced exterminators. McCauley's sent a young man who looked around and gave us an estimate for initial extermination and then for annual maintenance. The price for 4 -5 weekly visits was around $250, an average of $75 per visit. We discussed the fact that we didn't want dangerous chemicals because we have pets. He assured us that our family and our pets would not be adversely affected. The products used would specifically target the roaches. The first week he came he sprayed and set traps. The next day there were dead roaches everywhere, more than we had seen with the retail products. (a good thing) Pets seemed fine, there were no fumes or odors, I was happy. New roaches appeared as he had explained they would until all of the eggs had hatched and roaches were killed. Four weeks later I was roach free! We see the occasional beast that sneaks in on a pet or one of us but it is quickly killed so the infestation won't restart.The young man was dressed professionally. He was polite. If there was a problem, we were contacted immediately and rescheduled quickly. He arrived within 10 minutes of scheduled arrival and left nothing behind except the new traps.

Description of Work
A representative was sent to inspect the property and an estimate was given for the initial eradication and follow up maintenance. We showed him everywhere we had seen the roaches. Inside cabinets, under the fridge, inside the dishwasher. It was embarrassing but I didn't want him to miss a spot. The exterminator showed up once a week for 5 weeks to set traps and spray. Only once did we have to reschedule because he was out sick but we were contacted first thing in the morning and rescheduled immediately. He always arrived on time or within 10 minutes of expected arrival.

They are very knowledgeable and friendly. They provide a week's notice when they will be there and they are accommodating with their scheduling to work with you. They will discuss any problems or questions you may have about bugs with you.

Description of Work
They come quarterly for interior and exterior pest spraying.

I think the price is a little on the high side for what they do. I give them high ratings and will continue to use them in the future.

Description of Work
They came out last week. They do regular treatment of the property to safeguard the home from all kinds of insects and little invaders.

They go under the house and inspect everything. They put a little card up in the door showing that they were in there. They inspect at least once a year. They are very personable, and they know the business. They answer questions if you have them.

Description of Work
I use them for pest control services. I have an annual contract for termite control and inspection.

Description of Work
They come out and do termite and bug treatments.

Everything has been very good. They are very timely and will call a couple of days ahead of their appointment. You can call anytime if you have a problem between service calls and they will come out.

Description of Work
They come and do a quarterly spray around the perimeter of the yard and the house. It usually takes care of all the insects that would come into the house.

The Bug Man called ahead of time as they always have done. They showed up on time. What impressed me the most is there is no contract to sign, so if I had a problem with them I can have the opportunity to find someone else. They're doing a great job though. I like the results I am seeing, and the price is fine with us. He always explains his services in detail. I pay quarterly for their services.

Description of Work
They sprayed inside and outside of our two story, 2300 square foot, four bedroom home for ants, roaches and spiders.

Bugman provide quarterly pest control for us. Before they come out, they give us a courtesy call and leave us a number to reach them. They show up as scheduled and are conscientious about entering and exiting our home. They assure us of the safety level of the pesticides being used. We are very satisfied with their service.

Description of Work
We signed an annual contract with this company for inside and outside treatments for ants, spiders, and other pests.

The Bug Man was a company that we have always been appreciative of their service that we have received over the years. We were just glad that not only did take care of our unwanted insects, but they did a fine job of keeping our attic free of bats.

Description of Work
He did our quarterly pest control for ants, termites and other unwanted insects. They also did bat excavation in our attic.

The Bug Man called before coming and he showed up on time. I was happy with the results. I didn't mind paying as long as my house wasn't falling down around me. He seemed like he knew what was going on when he explained what he had done. He answered my questions that I had. The $100.00 is a yearly fee.

Description of Work
They treated the outside and under our one story home for termites.

Hey there!!! My name is Brittany and my company is Holy Mowlys. We are a small business, but with a lot of different skills. I have been an LLC for only a few years but have been in this type of work for as long as I can remember. We do pretty much anything home. From landscaping, to deck building, fences, to fascia. If you have an issue at your home or business we can likely tackle the problem. If you can dream it we can build it.  …

Let David Do It

First class, Quality Clean Painting for your home or office!  …

How is McCauley Services overall rated?

McCauley Services is currently rated 4.9 overall out of 5.

What days are McCauley Services open?

No, McCauley Services does not offer a senior discount.

Are warranties offered by McCauley Services?

No, McCauley Services does not offer warranties.

What services does McCauley Services offer?