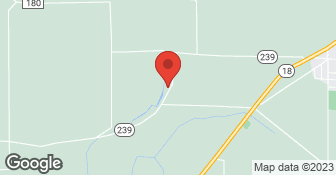 1 employee. No subs. No travel/trip. Charge by the job.

Description of Work
We had some very slight ceiling damage from ice staying on roof for extended time and melting underneath and working its way under shingles. We had three spots of loose sheet rock tape and a small circle of yellow in Dining Room which connects to Living Room and Entry Hall. We discussed with Jeff that it was critical that the finish be redone and MATCH into the Living Room. He said he could match it no problem and wouldn't even have to do the whole ceiling.This really surprised me. I said, You can do that? He assured us that he could. We also asked him to refinish a corner in the DR and paint the DR, LR, kitchen and entry hall. He said he saw another area in the DR ceiling where he felt like the tape was going to get loose that he would fix as well. We couldn't see it. We also had him to paint the Dining Room (DR) Living Room (LR) Kitchen and Entry Hall and I explained to him the only reason I was hiring him to paint was because we had just taken out all of the stained wood in our house and replaced in with brand new wood painted white and we did not want to paint ourselves because I was worried we would get paint on that brand new white wood and I asked him did he understand that---??? And I repeated that---that I did not want paint on that brand new white wood. The ceiling work was an insurance job. The insurance had given us money for that part.

Jeff usually beats all other quotes and competition and completes job in a timely manner. We have used him on several different occassions and always been sastified.

Description of Work
Jeff has done both drywall hanging and drywall finishing for us. He also does drywall repair

Jeff Evans Drywall is currently rated 3 overall out of 5.

No, Jeff Evans Drywall does not offer eco-friendly accreditations.