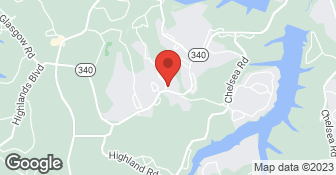 The initial impression was that the patio looked great. Even though they tore up my yard with a skid loader and I had to fix that I like the look of the patio. Now that we have had it a few years I am seeing that it is not holding up and and actually causing other issues. Harmon poured the patio next to the back fence and the pea rock is washing out and pushing the bottom of the fence out. They came out to look at and and said they would be back to fix it but have not done so. I have called them numerous time but they will not answer or call me back. The other issue I have is the patio is cracking in multiple areas and they say this is normal for concrete. My driveway is not cracking like this and I drive my car on it. I think this is poor workmanship and now I am stuck with a cracked up patio and Harmon is having the last laugh.

Description of Work
Harmon poured and stamped a patio in our backyard. There are pictures of it on their website where it looks great right after the work was done.

I was basicly satisfied with the over finish of the product, but Jim seemed more interested in making as much money as possible with the least amount of work provided. He stuck me with the concrete pump bill as well as the equipment rental for digging the footings, he did not cut expansion joints as per my request nor did he remove the forms.

Jimmy Harmon, whom portrays himself as a good Christian and claims that there is no job too big or to small on his website, was contacted by me to get an estimate on my front porch and stairs. He came to my home at a time different that what was agreed on to survey the project. As I waited for him to show up for an hour after the agreed time, I called and he told me he looked at the project. We talked about stamped concrete which I decided was too expensive and then decided on bare concrete for a price of $750.00. When I called him the next day to get a contract written, Jim had raised the price to $1000.00. I said fine lets get a contract written. He said he would call me the following day when he was on his way over. We had an ice storm on that day and Jim never showed or called to say he wasn't going to show. Two days later, I called him and he agreed to come the next day. Once again, no call no show. I called him again. He agreed to call before he came out the following day. The next day, no call, no show. This self proclaimed "Christian" man blatently lies on his website about his work ethic. If he's not reliable enough to make a phone call he certainly isn't reliable enough to work on a person's home

Description of Work
I contacted Jim Harmon to repour my front porch and stairs.

I have checked our records and we have NEVER had contact with this individual. I am Jimmy Harmon and I do not know you, nor have we ever refused to bid on a job that was in our scope of practice.

How is HARMON CONCRETE overall rated?

HARMON CONCRETE is currently rated 2.9 overall out of 5.

What days are HARMON CONCRETE open?

No, HARMON CONCRETE does not offer a senior discount.

Are warranties offered by HARMON CONCRETE?

No, HARMON CONCRETE does not offer warranties.

What services does HARMON CONCRETE offer?