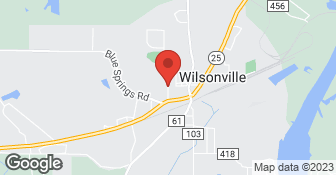 Description of Work
Doyle came to assess the job and we gave him all the information necessary for an estimate. He was very nice and had some good suggestions, but we never heard back from anyone!

I oversee our sales team and talked to the them about [Member name removed] complaint. We did not have all information needed to give a complete quote. He made several attempts to contact home owner and received no call backs. We are sorry for your inconvenience. We do our best to follow up on potential customers and do desire to satisfy each and every person that calls our company.

James came out right away (within a day) to give me an estimate and once I decided to go with DBand J, they performed the work a couple of weeks afterward. They removed the trash compactor and installed the cabinet, cleaning up as they went along. I asked for the cabinet to be primed wood only since I painted and glazed the surface. It matches the others so perfectly that only I can tell it is 'after market' by looking at it (though as I mentioned it is better quality than the existing solid oak cabinets).

Description of Work
James and Doyle made a cabinet to replace my '80s vintage trash compactor. These guys work well together and seem to have a good time doing something they enjoy. The cabinet was custom made to specifications I requested and a MUCH better quality than the existing cabinets. If I knew I would be in this house for many years to come I would have them replace all my kitchen AND bathroom cabinetry. I appreciate a job well done. Additionally James is a very sincere, matter of fact guy and his sincerity is endearing.

These guys were very quick to respond from the beginning and willing to answer any questions we had. We originally thought we could only afford to refinish our existing cabinets, but the price we received from DBand J was good enough so that we could replace the cabinets altogether. They were very courteous and even fixed a bathroom vanity at no additional cost to us. I would recommend them to anyone.

They were great, and they went far beyond what they said they would do. They took longer than I expected, but they did absolutely perfect work. It did not bother me that it took a while; probably, carpentry does take a while. It was great. They don’t have a lot of help as they had to lay off some people due to the economy, but they did great work. They came back and did something extra, which they felt was for the safety of my kids. I did not even know, and they did not charge me for it. I did not really shop around, so I don’t know how their price would compare with others. When I called them, they would always answer the phone. I would rate them highly and would use them again in the future if necessary.

Description of Work
Some of my cabinets were stolen and some were broken out of the house, and while I used D B & J Cabinetry Inc to fix that, I also had some customization work done.

With many years of experience in the industry, we are the Home repair/improvement experts you need to take care of your home. We only use the top quality materials giving you the comfort that we will treat your home as we would treat our own. Give Prime Management, a call today. We look forward to working with you! Roofing, Gutters, Remodeling, Additions, Concrete, Carpentry, Land Management, and Tree service you name it we can do it! 205-500-9527  …

We do Remodeling. We guarantee your satisfaction and we won’t leave until the job is done right. We pride ourselves on the quality work we provide, while delivering great customer service! Check out our services offered and call or click to schedule a free estimate today.  …

Insured
All statements concerning insurance, licenses, and bonds are informational only, and are self-reported. Since insurance, licenses and bonds can expire and can be cancelled, homeowners should always check such information for themselves.To find more licensing information for your state, visit our Find Licensing Requirements page.
General Information
Free Estimates
Yes
Eco-Friendly Accreditations
No
Payment Options
Check
Senior Discount
No
Warranties
Yes

Repair, replacement & installation of cabinets. We work with several remodelers that take care of any projects outside of our specialization.

How is D B & J Cabinetry Inc overall rated?

What days are D B & J Cabinetry Inc open?

What payment options does D B & J Cabinetry Inc provide

No, D B & J Cabinetry Inc does not offer eco-friendly accreditations.

Does D B & J Cabinetry Inc offer a senior discount?

No, D B & J Cabinetry Inc does not offer a senior discount.

Are warranties offered by D B & J Cabinetry Inc?

What services does D B & J Cabinetry Inc offer?

D B & J Cabinetry Inc offers the following services: Repair, replacement & installation of cabinets. We work with several remodelers that take care of any projects outside of our specialization.