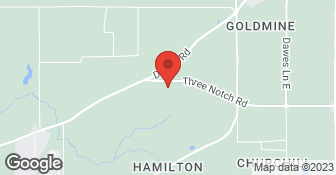 He was friendly the first time he came over, more business the second time. He completed the job and lights looks nice. He offered to clean up Sheetrock mess but had been here 4 hours instead of the hour to hour and a half he said it would take. Said one of his trucks was in the shop so he had to stop and run to Lowes at least once and somewhere else to get tools. I cleaned up mess. He said it would be $250 for job and 1 1/2 hours max. 4 hours later he handed me a bill for $638.90. I feel like I paid for time running back and forth for tools. I even had electrical plate cover here for him.

Description of Work
Installed 2 over the sink light fixtures and added a fourth toggle switch so each light in bathroom had its own switch. There was existing wiring to do this.

Mr. Winkler himself responded to a late night call because of power dimming and going out in parts of the house. He was prompt and courteous. He quickly determined that the problem was in the power line not the house. He called the power company and they came and temporarily fixed the problem then returned later and repaired it correctly.. Mr. Winkler's crew came after the power company completed their work and spend most of a day bringing the system up to code.

The service person was on time, friendly, and efficient. Work was completed quickly and was totally satisfactory.

excellent. They came on time, worked well, and were very professional.

Description of Work
overall assessment of electrical for a recently purchased house. Rewired outside trouble lights (2) one of which required rerouting wire thru attic. Replaced outside light fixture. checked both fuse boxes and wiring junctions

1st time, smooth and a charm. 2nd trip, experienced foreman very lazy and sullen. Inexperienced helper wasting time on the clock, my clock and just occupying space, but work turned out satisfactory. Although, 1 fixture in bathroom was not secured and fell off the wall. 3rd trip, I was charged for time, $75.00 per hour, from the time they left the yard, in Mobile, and their stop along the way for the convenience store breakfast, and then the stop at the previous customer before they got to my house. Then of course I was to pay for the portion of the hour that they went to lunch and were away from my property. After much wrangling with the office over the phone and my refusal to pay for services I did not get (hourly dispute) they stormed out and I was told they would never work for me again. I insisted that they accept the correct amount of money to which they were entitled, after being made aware that the guys that came out would be docked for the difference in their paycheck and there would be hell to pay from the boss.

Shawn arrived within an hour of my call, determined what the problem was, and immediately fixed it. He was very pleasant and professional throughout. I would definitely call them again if I have electrical problems in the future.

Description of Work
Replaced two outlets in kitchen, checked breakers and replaced one outside breaker.

Winkler Electric Inc is currently rated 4.6 overall out of 5.

No, Winkler Electric Inc does not offer free project estimates.

No, Winkler Electric Inc does not offer eco-friendly accreditations.

No, Winkler Electric Inc does not offer a senior discount.