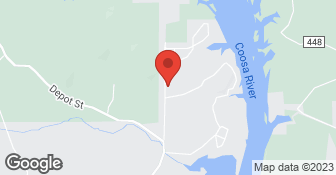 When he quoted me, he said it would take 2-3 days. What he did get done took 2 weeks. He also claimed to be one of Home Depot's top two painters that they used to do paint jobs. When I talked to Home Depot after the fact, they told me they only sold paint. They did not quote or do painting jobs. He convenienced me to give him the final payment so he could pay his employees on late Friday (3-2-2018) afternoon just before the bank closed. He lied about how much work had been completed and I paid him. My mistake. He promised to be back Saturday morning to finish up. Guess what. No show. He will not answer the phone or text messages but he cashed my check. I guess I am just out the money. The inside of the front door looks like he added sand to the varnish on the inside top. He sanded the outside and then did not re-varnish it leaving it exposed to the weather. He left the bathroom cab. with one coat of paint and it needed a second coat. He failed to paint two outside doors that he got paid for as well. I learned an expensive lesson from this.

Description of Work
Painting and staining. Interior and exterior.

I was hired by mr [Member Name Removed] to complete some painting work at this home we went in and walked around I told them what needed to be done. The work they say was not done is not entirely true! The reason the front door was never sand is because they decided to paint it and not stand front door I told them it needed to be stripped down to raw wood and started over if they wanted to keep the stain but they didn’t want to spend the money! On it they wanted me to try and sand some of the clear off by hand and they seen it didn’t work so plan B next! And I told them what needed to be done and they didn’t want to pay any extra to do it! Also I did prime and paint the cabinet in bathroom and put 3 coats on it the back doors where painted as they didn’t show pics of anything else only the front door which was discussed and talked about what needed to be done! They wanted to pick out a color for front door since they decided to just paint it and not stain because of cost.. I called them Back the next week with no return calls I done what I got paid for they were very happy at the end of the Job. And I was trying to do The right thing and do what I was paid for but they were not on the same page!! And as for me not being a pro Referral from Home Depot the person he asked just didn’t know what they were talking about I’ve been with Home Depot pro Referral since day one I’ve got pro I can send are you can look under pro referral with them and my company comes up as top 3! These post from Them Was a lie! From the beginning of it was so true as of all what I didn’t do why not show pics of it all why only show front door? As we and I have said I didn’t do! You were supposed to get color and let me know and never called me back after 5 attempts I try to go over and Beyond for all my customers and I have plenty references to back that I’m sorry Mr. [Member Name Removed] feel this way!
5.0

Just finished job today and it looks very good. Company showed up on time and performed all work exactly as asked. Josh helped answer all my questions and completed deck staining just like I wanted it. He also helped repair and replace some boards on the deck.

Description of Work
Pressure washed large screened in back porch and staircase. Then applied stain to all areas.

Thanks so much for giving me the opportunity to help you and get this job completed for you guys! Glad you loved it! Turned out beautiful! Thanks again for another happy customer!
5.0

Excellent job on first day with pressure washing and looks great. Arrived about 30 minutes late for first day of painting and were only able to work for 3 hours before the lift started giving them problems. Tried to work second day and lift totally failed. Rented another lift and were able to return to work after about 2 hours. On final day had 4 men instead of 2 and completed the job late in the day. Would blame delays on bad equipment from rental company and not provider.

Thanks so much [Member Name Removed]! I’m So happy you was understanding with the rental equipment failed! But we got the job done and it looks great! Thanks again for another happy customer!

Carpentry services Interior exterior paint We specialize in custom cabinets, carpentry services, wood working, and more! We guarantee your satisfaction, and we won’t leave until the job is done right. We pride ourselves on the quality work we provide, while delivering great customer service! Check out all the services we offer below and call -or- click to schedule a free estimate today!  …

A & R Painting and Services

A & R Painting and Services has been in business here in Birmingham for 3 years. It is an owner operated business. We provide interior and exterior paint, drywall, siding, flooring, power washing. Free estimates  …

How is Champion Painting overall rated?

Champion Painting is currently rated 4 overall out of 5.

What days are Champion Painting open?

Are warranties offered by Champion Painting?

What services does Champion Painting offer?