Gutters
Gutter Cleaning
Flooring Sales and Installation
Unfinished Carpentry
Licensing
Bonded
Insured
All statements concerning insurance, licenses, and bonds are informational only, and are self-reported. Since insurance, licenses and bonds can expire and can be cancelled, homeowners should always check such information for themselves. To find more licensing information for your state, visit our Find Licensing Requirements page.
Business Details 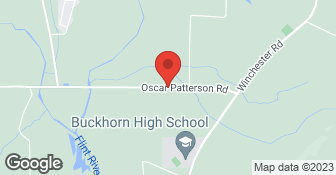 I am a small company and I am always on the job from start to finish. I use two other employees to help me with the labor if needed. I have 20 years experience in the fencing and home repair buisness. I have great references upon request. My low overhead allows me to beat the bigger companies on all their prices. I also guarantee all my work and will give a 5-10%discount if Angies List is mentioned. Please view my website for pictures of my work....

We are your one stop shop exterior cleaning service with 10 years experience in areas such as gutter cleaning , pressure washing , window cleaning , driveway, patio, sidewalks, residential and commercial cleaning. We are family owned and operated so we understand budgets as well as value , trust , and honesty.

We guarantee your satisfaction and we won’t leave until the job is done right. We pride ourselves on the quality work we provide, while delivering great customer service! Check out our services offered and call or click to schedule a free estimate today!

The owner of this "company" accepted payment in full from my wife's mother to install a fence in January of 2012.  He never returned to start the work; he cashed her check; and he did not thereafter respond to any calls or registered letters from my mother-in-law or my wife. A police report was filed in February of 2012, and the man was subsequently convicted of a felony in the Madison County Circ...

DESCRIPTION OF WORK
Nothing.  He scammed an elderly woman--my mother-in-law--out of $2000 and never completed the work.  To be more precise, he never started the work.  Stay away from this company--bad, bad news!

We paid them, and they said if we had any problems to contact them.  About 2-4 weeks after completion, we noticed planks had split and posts were bowing.  I called Mr. Shannon, who said he would come back to replace the problem boards.  After several calls, and a series of promises, I still have broken,  split and twisted boards that look terrible, even stained.  I would not use this company, I be...

DESCRIPTION OF WORK
Mr. Shannon removed an existing fence, and installed a new smaller wood privacy fence.  The work was quick and appeared to be done properly upon initial inspection.

On December 20, 2011, Michael Shannon came gave us an estimate on one part of our damage fence. He gave me a quote of 1300 for 105 feet of fence. I agreed to that price. I had another section of fence that was damaged but it was still standing, the gate on that section would not work. I asked him how much would that cost to remove and replace. He gave me a quote of 2000 for both sections. I agreed...

DESCRIPTION OF WORK
Replace a fence that was damaged during Tonado.

Awarded the actual work to another provider.  Pit Bull was responsive during the proposal phase of the project.

DESCRIPTION OF WORK
I called Pit Bull Fence to provide a proposal for a chain link fence.  They showed up on-time and provided a professional proposal.  I ended up awarding the work to another provider based on cost, but would include Pit Bull as a potential supplier on future projects.

Michael Shannon completed all work on time. I will have him work for me again.

DESCRIPTION OF WORK
On June 6, 2011, Michael Shannon completed a small fence job for $1,400.  He was able to get black chain link fence that Sears and Home Depot didn't have.  On June 23, he repaired and stained my deck for $1,200

I offer Free Estimates always on all types Fencing, Decks & all types of Home Repair. No job too BIG or too small.