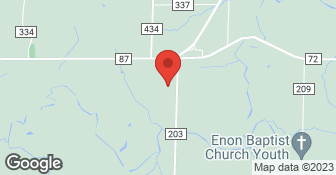 Make A Confident Choice with Coy's Enterprise All Work done to Customers Satisfaction For The Way You Live...

They did a great job! They put bella stone and they had to match it up so that it looked like it was one big piece. My house was a log house and I wanted to cover the outside so they had to do a lot of work, they earned every dime of that money!

Description of Work
They put siding on my house.

Very nice and honest people. Showed up when they said the would. Came back when they said they would. They repaired the siding with no problems. They gave me a very reasonable price and it looks great. Couldn't ask for any more! We had some siding that had fallen down in one place and some that had been blown loose in another place. Both places where very high up on a two-story house that sits on a high crawl space on a hill. In other words--it was very high up! They repaired all of these places with no problem. The header above the garage door was in terrible shape due to mistakes made by the builder's contractor. The siding trim above the garage door between the door and the brick was basically a facade because it had nothing behind to support it. In the 4 years since the house had been built the and quot;glueand quot; they had used to hold it together had melted and dripped and eventually the siding had separated at the seams and pulled away from the brick. I had several different people to tell me there was really nothing I could do because there was nothing behind the siding to nail it to. When Michael from Coy's came out he said 'no problem'. He pulled the siding trim off, put the wood there that should have been there to begin with, replace the trim with a new piece that was long enough it didn't have to be pieced (so no seams), recaulked and it looks like new. Fabulous! Looks better than it did when we bought the house. I will call them again and again for anything thing I need done outside. Absolutely two thumbs up!

MIchael Osburn arrived same day I requested an estimate. He was extremely courteous and listened to my requests and questions. He showed me his license and insurance info. Within a couple of days he came back with proposal. He emailed me 3 references and I called one (who had great things to say about his work). He returned and and details were worked out (such as brand of paints that were to be used) and we agreed on the job. Workers arrived promptly on planned day. They were very polite and quiet. The house was thoroughly pressure washed and gutters cleaned. The areas of mold were cleaned by hand. There were several places of rotted wood under the loose seams of the gutters. The seams were caulked and wood replaced. The wood trim was painted-job was perfect. No paint drips. Window panes were cleaned well. Exterior lights were installed. My dog had shredded several screens of the doors and windows on my deck, New screens (heavy duty to help prevent pet damage) were used to replace those damaged. My deck is huge and had several coats of stain. It was pressure washed to clean then stain applied. The stain color was a great match to my picket fence.The workers taped off all areas when painting and staining and laid down plastic underneath to prevent paint drips. The complete driveway and walkway were pressure washed thoroughly. The workers also replaced outdoor security lights for us. After all was done Michael and my husband and I walked around to survey all. We completed the transaction then. I cannot say enough about Michael and his crew. Their work was exceptional and their attitude was extremely professional. My home exterior is beautiful-so much better than when we purchased it 7 years ago. I would used Coy's Enterprise again and highly recommend them to others.

Description of Work
House was pressure washed, Gutters were cleaned and loose seams caulked. Rotted wood by gutters was replaced, All wood trim on house was painted including windows.. Window glass was cleaned. Damaged window and door screens were replaced. New exterior lights(which I bought) were installed. Large deck was pressure washed then stained. Lastly driveway and walkway were pressure washed

Extremely nice man and sent an estimate via email the next day. There was a good chance we would consider him until we received the price from other estimates and a better one was quoted from another company. Even when I told him he did not get the job, he was very nice and polite about it. I would definitely consider him in the future.

Description of Work
Gave an estimate for tree work as well as deck replacement.

I contacted this company for an estimate on metal roofing. I expressly told the young man who called me (Kris) that I needed to see samples, colors, etc., since I had never looked at metal roofing products before. He showed up without anything whatsoever to show me, measured my house, and presented me with an estimate for $11,000. I told him that was fine, but since I had no idea of what he was giving me an estimate for, this did not mean anything to me! He told me he would drop some color charts off, which he did the next day, but I still had not seen any samples. He never called me back for any follow-up. I did, however, get a call from someone else from Coy's (Mark), who explained to me that they had been having problems with Kris' not making calls he was supposed to, etc., and that Kris was no longer with them. He asked if I'd be interested in talking to him about the roofing, and I consented to this. Once again, I specifically told him that I needed to see samples of different types of metal roofing, colors available, etc. (and I told him I thought Kris was unprofessional because he had come to his appointment with me without such materials). Mark and some other man showed up for their appointment full of "information" about how they'd been approved to be contractors for TVA, and how they had all kinds of info about some of TVA's energy saving programs coming next year (but had nothing in writing to back up their claims). They had no samples or color charts. I asked them if they indeed could install metal roofing and they assured me they are. I asked what kind of metal products they use (steel? aluminum?) and the answer I got was "metal". I told them I know it's metal but I need to know what kind, how energy efficient it is, whether it's recyclable, etc., etc. They could answer none of these questions. They began pulling "samples" of all kinds of things from the back of their truck, none of which were what I was asking to see. Mark asked if he could come back in 30 minutes with a sample of what they had. I told him he could. He finally showed up about an hour later with a shingle that looked as if it had been pulled off someone's house. It was not anything I was interested in for my own house and I told him this. He asked if I still wanted an estimate and I said NO! and cut the conversation off then. Several weeks later, he had the nerve to call me back to tell me he now has some kind of samples and wondering if I wanted him to come back. I did not return his call. These people are totally inept as salespeople and I'm presuming it would be quite a frustrating experience for anyone to hire them to do anything to a house. Who knows if they are licensed, bonded, insured, etc., as dumb as they are!

Description of Work
Did not use this company. See below.

Since 1958, BDry Alabama has been the go to company for Alabama residents in need of professional basement or crawlspace waterproofing or approved foundation repair services.**Ask us about our FREE inspections!**  …

Specializing in construction! We always guarantee your satisfaction and won’t leave until the job is done right. We take pride in ourselves and on the quality work we provide, while always delivering great customer service! Check out our services offered, then call --or-- click to schedule a free estimate today!  …

We are a locally owned company with more than 20 years of combined experience in foundation construction and repair.  …

If we do not provide a service for your needs we do have referals for you we have used in past times that belive in helping others to atchvie there goals.

How is Coy's Enterprise overall rated?

Coy's Enterprise is currently rated 4.8 overall out of 5.

What days are Coy's Enterprise open?

No, Coy's Enterprise does not offer a senior discount.

Are warranties offered by Coy's Enterprise?

What services does Coy's Enterprise offer?

Are there any services Coy's Enterprise does not offer?

If we do not provide a service for your needs we do have referals for you we have used in past times that belive in helping others to atchvie there goals.