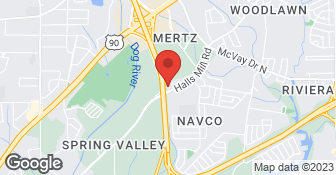 Complete DKI is a locally owned restoration & reconstruction firm specializing in water, fire, mold and bio-hazardous cleanup. We have two full service locations, Pensacola FL and Mobile AL. Both locations have technicians ready to respond to your call 24/7. Complete DKI ALWAYS answers the phone with a live local person. Complete DKI can restore you home, belongings and life back to normal. When Disaster Strikes, We Strike Back! Whether your a homeowner with a water damage or a property manager with a property that has suffered a fire, Complete DKI is ready to respond. All our vehicles are fully wrapped and our technicians are always in uniform....

I’m not sure what DKI’s role was supposed to be. They don’t return calls, and they charge for things they don’t do,

They are ok but not the greatest. I had a leak in my roof which was letting small amount of water in, eventually put a hole in my drywall. When I first contacted DKI they came out when expected and provided me a quote of $425 to replace two sections of ceiling sheetrock and about $250 for the roof repair if needed. This was the highest quote I received and decided to go with them because I was worried there was a water leak and that it would be repaired in a timely manner. Well when it came to do my drywall I found out that DKI doesn't do any of the work but rather hires subcontractors to do the work, so I was basically paying a third party company to manage my repair. I wish this was stated up front. When the roofer came out to look at the roof he told me he would give DKI the quote to fix the roof. Through all of this process I was not kept up to date on the repairs or how much the roof would cost, but instead being relayed messages from the drywall contractor on what was happening. DKI told me there computers were down during that time and couldn't get back to me, but that excuse is not acceptable considering everyone has a cell phone and usually email accompanies that. When I finally got a hold of DKI about how much the roof repair would cost it ended up being $725. Overall communication seems to be lacking between the customer and DKI and in the end I feel like I got taken to the cleaners because had I hired a contractor for drywall and find my own roofing company I would have paid less.

Thank you for your feedback. Complete DKI is a restoration and reconstruction company, where we do most construction in house, trade specific items are sometimes performed by subcontractors. Those trades include roofing, which a is a licensed trade. Our subcontractors work with us on a daily basis and are background checked, they are also in DKI uniform. You are correct, you could hire the subs yourself and manage the job, but by hiring Complete DKI, that work is guaranteed for 3 years and we also manage the job to make sure it gets done in a timely manner. With Complete DKI using the same subcontractors on a daily bases, we also get discounted pricing that they do not offer to homeowners directly. It’s important to k now that it would take additional time for you as the homeowner to schedule these task, it can add time to the length of the overall job. It’s a delicate balance of having people with different trades work together and not in each other’s way.
5.0

I was so pleased with everything Complete DKI did for me after I suffered water damage in my home in Mobile due to a storm that came through the area last month. The techs were always on time and in uniform no matter what (which is a big deal in my book). The work that was done within my home was set on a fast track to get done ASAP so that I could get my home back to normal. I felt as if they genuinely cared about my situation and did everything they could for me. If you are looking for a company that is fairly priced, professional, and actually cares about their clients Complete DKI is the way to go.

Description of Work
Complete DKI's Mobile Location provided me with mitigation and reconstruction of my home after a flood.

The price was very reasonable for what I have gotten. I got a few estimates. I like them. When they told me I didn’t need more work, a lot of people wouldn’t do that. I liked that they’re honest. They also gave me choices. They said they can do this which is the expensive way or that they can try if first with this which is the less expensive way and I thought that was very generous. Things like that are important when you're getting some work done.

Description of Work
I had a leak in my roof so Complete DKI fixed the outside and the inside. They had a bad stain in the bathroom and they fixed it for me. They checked everything to make sure I didn’t have any more leaks. They also do interior remodeling.

BioClean Remediation, LLC has been providing outstanding services to the Alabama Gulf Coast and beyond for over 12 years. Our fantastic, environmentally-safe company is locally owned and operated by people who truly care about the health and wellness of your family. Whether you're struggling to restore your home after a flood or you have a mold problem that you need help with, you can count on our licensed and certified staff to provide the best quality services on the Gulf Coast.  …

AFS Foundation & Waterproofing Specialist, founded in 2000, is a subsidiary of Groundworks, a family of companies that offers superior, proven solutions for your foundation repair, structural repair, crawl space encapsulation, dehumidification, and concrete leveling needs. They currently maintain offices in Alabama, Tennessee, Georgia, and Mississippi. AFS is a recognized accredited member of the Better Business Bureau and devotes its years of experience, industry knowledge and specialized training to help customers protect their homes or commercial buildings from water damage, concrete sinking, and foundation failure.  …

I am a licensed realtor with Keller Williams. My husband and I specialise in preparing homes for sale - from small handyman punch lists to drywall/siding installation. We serve customers in Mobile, Theodore and Semmes. We are a small family business. When you call, Oksana Leslie answers. No room additions/flooring/roofing. Text to Oksana/s cell phone 850 324 2244 your name, and about your project, or email via Angie's List is a better way to get a quick response.  …

Complete DKI is licensed in mold remediation, water damage restoration and smoke and fire clean up. Complete DKI is also a Florida State licensed contractor. There is no doubt that Complete DKI can assist you in your state of emergency. Water damages, fires and mold are serious issues that should not be trusted to just any handy man. The professionals at Complete DKI have the accreditations and certifications that allow us to serve you best. When disaster strikes, we strike back.

Complete DKI is a mold remediation company. We do not provide mold testing or mold clearance testing. It is against Florida law to provide testing and remediation on the same property.

How is FIRST ONSITE overall rated?

FIRST ONSITE is currently rated 3.6 overall out of 5.

What days are FIRST ONSITE open?

No, FIRST ONSITE does not offer a senior discount.

Are warranties offered by FIRST ONSITE?

No, FIRST ONSITE does not offer warranties.

What services does FIRST ONSITE offer?

FIRST ONSITE offers the following services: Complete DKI is licensed in mold remediation, water damage restoration and smoke and fire clean up. Complete DKI is also a Florida State licensed contractor. There is no doubt that Complete DKI can assist you in your state of emergency. Water damages, fires and mold are serious issues that should not be trusted to just any handy man. The professionals at Complete DKI have the accreditations and certifications that allow us to serve you best. When disaster strikes, we strike back.

Are there any services FIRST ONSITE does not offer?

Complete DKI is a mold remediation company. We do not provide mold testing or mold clearance testing. It is against Florida law to provide testing and remediation on the same property.