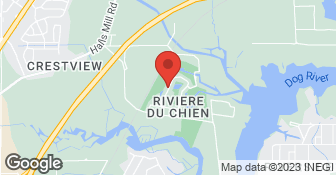 Came prompting to assess and take measurements. Promised a scheduled installation within 10 days. 2 months later and 6 unanswered phone calls from me to follow up I am done with this company. Paid $200. for estimate.

Great! He was very polite and professional!

Terrific. Friendly, left my house clean, did a great job!!

Thomas Lovell gave us two options, replace the cap or seal the chimney, which he said would cost $250.00 for either one. Because we do not use the fireplace, and have a problem with wasps building nests in the chimney and getting into the house, he suggested the seal. He said the seal would be screwed into the chimney, would be permanent, and, in fact, would never come off without someone going onto the chimney to take it off. We chose to seal the chimney so that we wouldn't have to fool with a cap possibly blowing off again. Mr. Lovell and his son completed the job on August 17, 2017. It took them about 45 minutes. We paid Mr. Lovell the $250.00 that day. On October 22, 2017, we heard rain dripping in the chimney and looked in to discover it was full of water. My husband used a mirror to look up into the chimney. The seal was gone, and he could see loose adhesive substance around the inside top of the chimney. We called Coastal Chimney Sweeps twice to try to resolve the problem. Mr. Lovell would not come and look at the problem, or talk about it except to say that he can't be responsible for wind. We tried to explain there hadn't been any wind, that we felt that the seal wasn't secured properly and that is why it came off in two months time. We filed a complaint with the Better Business Bureau. It is unfortunate that a small family business like this cares so little for their quality of work or the customers they serve. Please remember you often can't see they work they do in the chimney, and don't know what they have done until something goes wrong. When it goes wrong, they will not stand by their work. The mark of a really good company is one that stands behind their product and the work they do. There are plenty of other companies out there- don't use this one unless you're willing to risk having to redo the their work!

Description of Work
The cap blew off our chimney. It was in place for 22 years. After it blew off, our fireplace leaked. We do not use our fireplace, but we needed to stop the leak. We contacted Coastal Chimney to replace the cap or seal the fireplace.

Please enter what you would like the response to look like:The [member name removed] original cap was knocked off by overhanging trees. We notified them the tree limbs needed to be cut back to eliminate the possibility of this same problem. Storms and tornadoes came thru the area a day before they called to say the seal was missing. Not just displaced but blown completely out of their yard. This is an extremely tall roof that takes 30 minutes of set up with ladders on the roof to reach the top. They had not had the trees cut back & they had once again hit the chase and knocked off the seal. We were willing to reduce our price of the return visit but they would not negotiate, just hung the phone up.
5.0

Tom and Kathy B.

Truhfully one can't know how well this work is done due to its nature. But meeting Mr. Lovell and watching hime work I am more than confident that i have a job well done. Care was taken ro protect the interior of my home with not a single piece of soot finding its way onto floors, rugs or furniture. My highest recommendation!

Very prompt, professional, and courteous. They did an excellent job, respected my home, were very clean and did a through job. I would not hesitate to call on them again or recommend them to others.

Description of Work
Inspect 2 60 year old chimneys that had never been burned. Needed the top spot of Chimneys replaced and chimneys sealed to prevent water from entering through the brick.

Prompt, professional, reasonably priced. On inspection after cleaning the chimney, he found several cracks that needed to be repaired. He provided a detailed description of the problem, potential complications and process needed to repair as well as an estimate. He returned the following week as scheduled and made the necessary repairs. We were very pleased with all aspects of his work.

It went really well. Mr. Lovell repaired the chimney as promised and there have been no other problems.

Description of Work
I needed extensive repair to chimney.

It was a great experience with very knowledgeable people!

It didn't. I called twice and left a message. They never returned my call. I am going elsewhere.

Tom and his son arrived a little early and went right to work. He explained what he was going to do and assured my wife that her white couches were not in danger of soot coverage. He proceeded to check the flu and clean the chimney pipe and then completely clean the fire box. He discovered a loose piece of soapstone across the front of the stove which he repaired (at no charge).....The entire job lasted about an hour and when they left you couldn't tell they had been there. Also checked small gas fireplace in kitchen and showed me how to operate. Very personable and professional, would definately use again.

They were awesome. professional. clean. great!

Arrived ahead of schedule and provided prompt and professional service. Excellent operation and will definitely use in the future. Highly recommended.

Everything went very well. Will use again in the Fall.

Tom Lovell has cleaned my fireplaces since the early 90's. He is a very knowledgeable and helpful professional. Recently, I hired Tom to inspect two fireplaces in my new home. He completed the inspections and recommended the installation of dampers and the modification of one firebox. The work was done quickly and expertly. Tom and his son clean up and leave everything better than they find it.

The provider arrived on time and brought all of his equipment. He covered all of the area surrounding the fireplace with a tarp and then began cleaning. He was finished in approximately thirty minutes and he returned all of his equipment to the truck, leaving the living room exactly as he found it. He left a brochure with questions, answers and diagrams that is very helpful. It also has instructions on how to determine if your chimney has creosote and what to do in case of a chimney fire.

Description of Work
The provider cleaned a wood-burning fireplace and a pre-fab, non-masonry chimney.

Bought a 1950 house and the chimney needed cleaning as well as produced a smoky odor inside. Found provider on Angie's List. Expected to be able to get an appointment almost immediately it being mid-summer, but didn't have an available slot until the next week. Seemed to confirm the positive reviews from AL. Made appointment for 7:00 AM to accommodate my work schedule. Proprietor showed up right on time, sweep hat and all. Had a record of servicing the property previously in '09, so unless serviced by someone else certainly explained the heavy buildup. He inspected fireplace, chimney and damper and suggested to avoid burning green wood, and recommended a thorough cleaning and baking soda treatment to help with the odor. Got to work with his helper and cleaned the chimney from the inside. After 45 minutes the job was complete- I could see the big difference from creosote removal- he pronounced the chimney in good health although recommending we clear exterior ivy at least away from the cap, and we were both on our way. Preliminary impression is of reduced odor, but may take some time to confirm. An excellent value and great service.

Great. Had not cleaned it since I bought the house 8 yrs. ago. Got it just in time. Recommend once a year to avoid potential fire damage.

Description of Work
Inspected and cleaned my chimney. Also helped me lift and place a new copper chimney cap I had purchased somewhere else on top of my chimney and did not charge a dime. Will definitely use them the next time my chimney needs attention.

Cleaned and inspected the chimney. They left the house clean as well.

Very good. He was very prompt, courteous and did a good job.

Description of Work
I used Coastal Chimney Sweeps LLC to inspect and clean my chimney.

Tom returned my initial call promptly, and we established a day and time for the service. They arrived on time and were very friendly. He explained briefly what needed to be done. They finished the job quickly and efficiently. While still in my home they gave me an estimate on another job on two other chimneys which need to be cleaned and sealed. That job is scheduled to be completed tomorrow morning. I was overall very pleased with my experience.

The first call was to inspect a chimney in general and rid the chimney of an odor. Seems a critter had climbed down the chimney and lived for a time on a ledge above the flue. He climbed the chimeny (two stories plus) via ladders to see inside. He then came into the house and vacuumed the leavings from the ledge to eliminate the odor with help of some deodorant. The problem was eliminated.

Description of Work
I have used this company three times. A chimney inspection and cleaning, the installation of a "critter screen" and the cleaning of a dryer vent.

Quality, reliable service at an affordable price. We are family owned and operated and have 20+ years of lawncare experience. We work hard to insure that our customers benefit the most within their budget. Grass cutting, weedeating, edging, hedge trimming, pruning, leaf blowing and debris removal  …

We specialize in all phases of landscaping, lawn maintenance, routine mowing services, mulch spreading, yard clean ups, pressure washing / soft washing, roof cleaning, window cleaning, deck maintenance, and more! We guarantee your satisfaction, and we won’t leave until the job is done right. We pride ourselves on the quality work we provide, while delivering great customer service! Check out all the services we offer below and call -or- click to schedule a free estimate today!  …

Bonded
Insured
All statements concerning insurance, licenses, and bonds are informational only, and are self-reported. Since insurance, licenses and bonds can expire and can be cancelled, homeowners should always check such information for themselves.To find more licensing information for your state, visit our Find Licensing Requirements page.
General Information
Free Estimates
Ask for Details
Eco-Friendly Accreditations
No
Payment Options
Check
Senior Discount
No
Warranties
Ask for details

Coastal Chimney Sweeps LLC is currently rated 4.8 overall out of 5.

No, Coastal Chimney Sweeps LLC does not offer eco-friendly accreditations.

No, Coastal Chimney Sweeps LLC does not offer a senior discount.

No, Coastal Chimney Sweeps LLC does not offer warranties.

Are there any services Coastal Chimney Sweeps LLC does not offer?