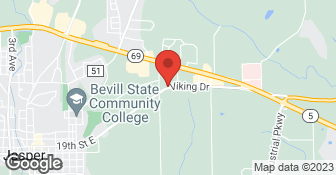 The repairman responded quickly and fixed the problem. He was very courteous and professional. They called us the next day and we agreed for them to come clean and inspect unit. One hour after representative left our house the unit froze up. We called and they responded and told us the coil had to be replaced and they had to order the part the cost would be 1600.00. We waited four weeks and no word. Called and they had totally forgot about us and ordering the part. Representative came back gave us a new estimate of 1300.00 and said they could get a part that would work. Two weeks later we called to see if part was in and could they fix the unit. Never received a call back. We have called twice since the first call and still haven't received a call back. We have decided to call another company because we are using emergency heat since Feb. and the AC will not work without that coil. I feel we have been more than patience with this company and I will never call or recommend them to anyone again.

Description of Work
Called regarding problem with new thermostat.

Every time I have used them it's been very positive. They always come out very quickly and they have done a good job. They are professional and polite when they are in my home.

Description of Work
They came to my home and did some rewiring for me.

Our residential service department specializes in electrical repairs, outlet / switch replacement and repair, indoor and outdoor lighting repair and installation, and any other electrical issues you may have. In business since 1983, our family owned company is your local solution to all things electrical. We offer residential and commercial service in Birmingham, Tuscaloosa, and all surrounding areas. We offer an hourly pricing model to ensure you only pay for what is needed with no additional charges or fees.  …

BriteBox Electrical is Atlanta's Elevated Electrician. From re-wiring an outlet, to home back up generators, to full home Audio, Video low voltage and home security needs. We provide a full range of services for homeowners. Estimates on back up generators and home automation system designs are free.  …

Reliable Heating & Air is currently rated 3.7 overall out of 5.

No, Reliable Heating & Air does not offer eco-friendly accreditations.

No, Reliable Heating & Air does not offer a senior discount.

No, Reliable Heating & Air does not offer warranties.