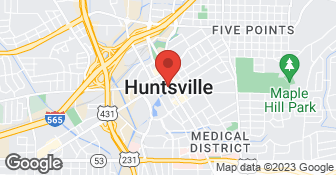 did an above average job. Took pride in the work, and did not leave a mess.

The first time they did it was fairly sloppy but for the price I did not complain that much. A few months later, the painting on the patio and the front porch started bubbling up and peeling off. I took my time in calling them back because I was involved in taking care of my sick mother, when I called back they don't want to take responsibility at first then they agreed to come back and repaint the porch and the patio. They came back and painted and I gave them a much better review but now several years later, the paint has blistered and peeled off again. I called them about a year ago to let them know and they did not want to come out and fix it. So I was surprised that they have a very good rating with Angie's List and I'm thinking how in the world they got it. Am I the only customer that has problems? If they are willing to come out and do the job, I would use them again but if not, I wouldn't use them again.

Description of Work
They painted around the windows of my mother's house, painted the front porch and the patio.

we warrant our work for 12 months, we cheerfully return to complete warranty work, which we have very little of as we try hard to make sure it is completed right the first time. The home has really poor maintenance and upkeep. We really tried hard to make her happy, but now after several years (we completed her work in Dec 2012) there is no warranty available. We gave her a really good price, did a great job, repainted porch as there was a minor bubble or two (some how moisture is getting behind from the surface side), really tried hard to make her happy, and now 6 years later she complains again. Unbelievable to me.
5.0

They were there on time, cheaper than they quoted and very courteous.

Description of Work
They painted the living room.

What a GREAT customer to work with! They knew exactly what they wanted, met me at exact specified time (he was EARLY) and loved our finished product!
5.0

I decided to go with another company that would do both the painting and gutter work. Marathon's price was in line with the other company, but I did not want to have to deal with another company to do the gutters. I had Marathon paint another house on the outside a few years ago and was pleased with their work. They were careful and thorough.

Description of Work
I wanted to have my house painted outside and new gutters installed to replace the old ones. I got an estimate for the painting and removing the old gutters, but the company did not install gutters, so I would have to get another company to do that. Marathon's proposal was printed out in detail to show what they proposed to do. I think they are very professional, and the only thing I would mark them down for was that it took a couple of weeks to get their estimate.

Outstanding performance by this company. Very easy to work with. Totally professional crew...these guys and gals really know how to paint! Always on time, no lollygagging around during the day, short lunch break. Took the time to explain anything we asked about. They gave us very sound recommendations on paint and paint quality and we are very, very pleased with the result. They are methodical and the attention to detail is just great. Would hire them again in a heartbeat. And, they were not the most expensive estimate we got. Family-owned business.

Description of Work
Painted the interior of our 3200 sq ft home, walls only, and the exterior (gutters, dormers, front porch). Power washed the outside, replaced rotted wood on back patio porch, put in new insect screens, stained the wood on the back patio porch. Recaulked all windows. Drywall repair.

Marathon Painting did an excellent job painting the exterior or my home. They were meticulous throughout the process and took great care in cleaning up after their work. The trim repairs were excellent and I'm very satisfied with the final result.

Marathon showed up on time both days they were scheduled an immediately got to work. The crew was professional and polite, and the work was finished quickly and to a high quality.

Description of Work
Ceilings painted in great room and 4 bedrooms.

Marathon did a wonderful job! We were very pleased with the quality, price, amount of time, clean up after job and overall professionalism. This was a big, tough job and they handled it so well. We will definetly use them again.

Description of Work
We are getting my husbands' parents 3600 square ft. house ready for sale and it was in bad shape with many drywall repairs and painting over wallpaper.

They did well. I didn't get a lot of quotes, I figured they were somewhere in the ballpark. I think they were credible. They were punctual. They were professional. They see me online. Someone recommended them to me, so I probably would recommend them based on the recommendation.

Description of Work
I got a bid from them. I never got any work, just a bid.

My name is Timothy and I started pressure washing on weekends when I was in high school. Most of the work I did then was driveways. When I graduated (two years ago) I told my Dad I wanted to keep pressure washing. So he said "if your gonna do something then you need to do it right". He helped me build a professional rig on a 14 ft truck with the best of equipment and he helps me everyday with my business. Now I work on all kind of projects, from driveways to roofs, houses, fences, even whole shopping centers. I'm proud of what we do. Its nice meeting new people and seeing the look on their faces when we're done. We use modern high grade cleaning techniques, coupled with the best cleaning products and I can personally assure you we would never leave a job until we've earned a happy customer. Ask for Rapid Power Wash cause we do our work right. Thank You for considering us. Timothy  …

Our mission at Power Pressure LLC is simple: to provide high-quality exterior cleaning services for our values clients. Our team goes above and beyond to cater to each project's specific needs. Through open communication and exceptional service. We hope you will find what you are looking for with our Pressure Washing Business  …

How is Marathon Painting overall rated?

Marathon Painting is currently rated 4.8 overall out of 5.

What days are Marathon Painting open?

No, Marathon Painting does not offer a senior discount.

Are warranties offered by Marathon Painting?

What services does Marathon Painting offer?