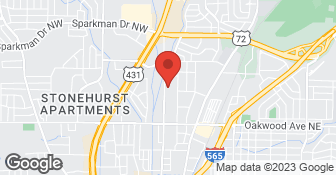 Provider showed up on time and did a very thorough inspection, was completely professional, and gave me good information. I would definitely recommend them.

Description of Work
Provider did an inspection of my service.

It went very well. It was fine. It was reasonably priced. I've been using them since 2011. I didn't use anybody else. Their pricing was fine.

Description of Work
I used their plumbing service. They handled my plumbing and my heating and cooling. The most recent time, we had some sort of a leak and they fixed the leak.

Description of Work
I used them about three years ago. On that last visit, they serviced a heating and cooling unit that they had installed a year before.

Arrived a 15 minutes late but TWO people called ahead to let us know. Polite and knowledgeable. I would definitely use them again.

When I found the leak I immediately called The Hutchen's Company. I was getting up as much water as possible so the water damage would be contained to one room if possible. When the Hutchen's men arrived they surveyed the damage and began to look for the leak. As it turned out it was harder than first expected and they had to return the next day to locate where exactly the water was coming from. Since this turned out to be an insurance job, my adjuster came out and got on the cleaning up and finishing up of repair work to the home.

Description of Work
I had a water leak in the wall of my house. I had a repairman within hours of my calling and they seemed to know how to handle an emergency in a hurry. Water leaks in walls require some sheet rock to be removed and insulation to be removed so they can find the leak site.

when fine, except that I had to do the wall repair myself.

We are pleased with the Hutchens Company. We have found them to be reliable, dependable, trust-worthy and fair.

The Hutchens Company has always been very responsive, and done quality work. Never a redo. Has responded on weekends and nights when needed. I depend on them for maintenance. Reasonably priced, top quality work.

Description of Work
Plumbing and HVAC services on a rental house in Blossomwood that I own. Has done all HVAC and plumbing maintenance since i bought the house in 2006. Reworked gas furnace that had been installed incorrectly, and installed additional heat pump, that works with gas heating. Work done quickly and correctly, no hassle, very competent people.

I have used them for a number of things and I have never had a bad experience with anybody they have ever sent out here. They are mannerly and timely and are on call 24/7 365 days a year. We had very cold temperatures one night last winter and they had somebody out here within two hours to help me. I will use them again in the future. I really trust them and am comfortable with them.

Description of Work
I used Hutchens Company to unfreeze 4 water lines and repair leaks in the pipes during cold weather last winter.

They had it done in record time and were extremely reasonable. They are going to send you the most top notch people and service in the area. You don't have to worry about using them and I feel safe with them. I will use them again in the future.

Description of Work
I used Hutchens Company to replace and rewire some of the electric plugs in my house.

I have used them for a number of things and I have never had a bad experience with anybody they have ever sent out here. They are mannerly and timely and are on call 24/7 365 days a year. We had very cold temperatures one night last winter and they had somebody out here within two hours to help me. I will use them again in the future.

Description of Work
I used Hutchens Company to work on my heating and air system.

We give the Hutchens Company an A+. The repair was scheduled on the day we called. The service man (Gerald) arrived very close to the promised time. He listend carefully to my explanation of the history of the problems we had had, which were very similar to the problem we had that day. He thoroughly examined the system and arrived at some puzzled conclusions. He determined that when the unit was installed approximately six years ago, an unnecessary part was left in the system which was causing excessive pressure to build up during the cooling process. Gerald thoroughly explained the problem and the solution. After he had completed his repair, he volunteered to stay beyond the billable time to assure that the unit was functioning properly. I commend Huntchens Company for hiring and training such a skilled and professional as Gerald. I also commend Hutchens Company for its policy of invoicing its customers for services rather than demanding payment at the time of the service. I had expected to write a check when the service call concluded but the trust Hutchens showed me confirms for me that they are exactly the kind of company I can place my trust in. I highly recommend The Hutchens Company.

Description of Work
AC Unit would not cool when turned on for the first time in the season. This has been a recurring problem since we bought our house two and a half years ago. We had another company attempt to repair the problem on three other occasions and had been considering replacing the unit even though it is only six years old,

Description of Work
AC froze up again. The Hutchens Co. found a (very small) leak others could not, and found my unit was still under warranty for parts. Obtained a new evaporator within one day and installed it. Very knowledgeable tech, polite and helpful with exoplanations.

They are wonderful because they always come as soon as you call them. They take care of whatever the problem is. They always bill you afterwards; you never have to pay on the spot. They always do a good job.

Description of Work
They repaired a leak on the pipe coming out of my hot water heater.

We do plumbing, heating, and cooling. We show up on time and go the extra mile for our customers. We service and install a wide array of products with the upmost quality and assurance that you will be satisfied.  …

Hutchens Company Inc is currently rated 4.9 overall out of 5.

No, Hutchens Company Inc does not offer free project estimates.

No, Hutchens Company Inc does not offer eco-friendly accreditations.

No, Hutchens Company Inc does not offer warranties.