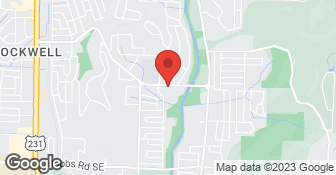 A to Z pressure washing

Specializing in PRESSURE WASHING! We always guarantee your satisfaction and won’t leave until the job is done right. We take pride in ourselves and on the quality work we provide, while always delivering great customer service! Check out our services offered, then call --or-- click to schedule a free estimate today! We do windows, houses, driveways, building, etc  …

**WEEKEND SERVICE ONLY UNTIL FURTHER NOTICE**We guarantee your satisfaction and we won’t leave until the job is done right. We pride ourselves on the quality work we provide, while delivering great customer service! Check out our services offered and call or click to schedule a free estimate today.  …

Fantastic! Dale and assistants were quite knowledgeable and thorough. Impressed.

I don't like to give bad reviews--especially of people I've met in person and liked. So I'll give them a D instead of the F I want to. I called and left a message and didn't receive a call back within 2 or three days. Knowing it's a busy time of year I called and left another message. Got a return call. I didn't talk to Dale Webster himself, but Christopher. I explained all of our issues briefly and arranged for him to come out at a certain time to take a look. Stayed home all day in expectation. Hours past the approximate time he was supposed to be there, I called him. He apologized and said he couldn't make it. Phone calls only take a minute, but okay. So he arranged to come out Monday and did so. Unfortunately, there was very little he could help me with. He said Dale would need to come out. Seriously, someone comes for your problems just to tell you they're not the person to help you?! I had told him briefly over the phone what it was, but evidently that wasn't in his job description and he didn't know it. He said he'd talk to Dale and get him out. They say they help with sprinkler problems. But when he came, he said he'd never seen ours before but would shop for the part and could get to it in a few days. Never called me back that he'd found it or not found it. I texted him finally on the day he was supposed to fix it. He said oh, sorry, couldn't find it and never offered to set up a time for Dale to come out like he'd said. Just all very aggravating. I can understand being busy. I can understand never having seen a part before. I can understand being out of your depth with a landscaping problem. But the lack of communication was unprofessional. Contrast that with the company I called next. They made an exact time appointment. Called me to confirm a day or so before. And showed up on time--actually a little early. How hard is that?!

Everything was done above our expectations and that is why we asked Dale Webster to do all the additional work as well.

Description of Work
Put in a strong and attractive stone wall, landscaped the backyard beautifully with grass and stone work, and provided us with a sprinkler system that really does the job well. Plus completed fix our drainage problems from living on a slope and did the work professionally and with care..

Dale and his team showed up right on time and worked without stop until the job was done. We knew going in that his work was not going to completely eliminate the runoff issue, but the modifications he made have made a massive difference. I wish I had a video showing the water flow before and after Dale did his work! Overall, we couldn't be happier with the work he and his crew did. In fact, we've asked him back to evaluate another project for us. We highly recommend Dale Webster's Landscaping and Drainage!

Description of Work
Dale and his crew modified the lay of our yard to the east of our house to redirect rainwater that was causing problems in our breezeway.

Dale Webster was extremely professional. His coordination before, during, and after the job was excellent. He and his crew evaluated my problem and provided a recommended solution & price. Once I chose his company, he gave me a projected time for when he could start my project. This projection was accurate. Dale and his crew was very conscientious about their work and took pride in doing a good job. I felt as if I could trust them to do the job right. Over the 2 day project, when I asked, Dale gave me an update of what they were doing and how they were doing it. He walked the project with me and showed me what they were doing. After they completed the project, they cleaned up the area and put all my lawn items back in their original position. Dale again walked the project site with me and answered all my questions. I was extremely pleased with the job performed by this company and would highly recommend them to anyone for their consideration. You might be able to get someone cheaper, but I doubt that you could find anyone who could do a better job!!!

Description of Work
They dug a trench along the back of our home and installed a French drain and gutter system to help water from entering into our sun room. Discharge lines were run left and right to the back lawn area.

Mr. Webster and his crew were timely, clean, and communicated well. They cleared existing lines where they could, and replaced what they could not. Mr. Webster was very considerate of they needs of my property and the cost of the job. I highly recommend him!

Description of Work
Mr. Webster and his crew repaired a dysfunctional drainage system around my home.

Left two messages and never returned my call.. They were a week apart also..

Description of Work
NOTHING was done!!!! He didn't return my calls!!!!

Excellent work performed with high quality. Dale was on time each day with a hard-working crew. The team was respectful of people and property. Dale is person you should select for your work!!

Showed up on time as scheduled, his crew dug in and completed the work as defined, they fixed the drainage problems (as attested by the recent rains) and left the area in beautiful shape for us to start planting again. Neat, cleaned up after themselves, and left my wife delighted about how easy the planting she wanted to do was so much better than we could have done ourselves.

Description of Work
Took out a tree, a group of old azaleas, and old garden growth, then ground out the stump, re-contoured and graded out the large garden area, filled-in soil where needed, prepped and conditioned soil to prepare it for re-planting.

The controller box for my lawn sprinkler system had been accidentally broken off the wall and the wiring was broken. Webster Services repaired the controller box and checked the system out to see if adjustments were needed.