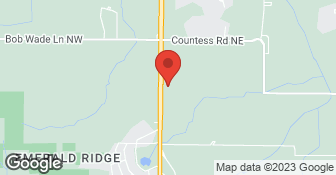 Had freeze damage. Lost confidence in Insurance company preferred provider due to poor responsiveness and knowledge of the work to be done. Contacted Changes Flooring; response was immediate; price was right. They started work immediately and finished in a timely manner. Changes management are very personable, honest, and easy to work with. Their response to our punchlist items was immediate. I plan to use them again.

It was not as select (consistent in color) |as I wanted but it worked out and I learned to love it. They delivered the |wood, very much appreciated! I needed a box a year later and they ordered it for me.

The crew at Changes did a great job. They started and finished on the dates promised.

Description of Work
Changes put in a new hand scraped floor, painted all of our ceilings and a bathroom.

The owner, referred to me by a friend, gave a verbal estimate after visiting the home. I went to the store to pick materials but he could not find the written estimate after searching the office thoroughly for it. I eventually selected the materials but was not offered a contract or the written estimate. I paid the first installment (of 3) and work started when promised and preceded promptly and the other 2 installments were paid promptly. All flooring and paint was installed without incident. After finishing the tile bath surround, the tile man showed me that the faucet discharge was not fitting on the pipe correctly. I recall that he left it on there but he states he took it off and left it on the counter and we put it on (which they now claim is our fault). Also, the fittings behind the faucet handles were not replaced and there were holes there where the tile had been nipped to fit around the pipes. Three weeks later we noticed that there was water coming up from the laminate in the hall and under the carpet in the bedroom adjacent to the bathroom. We called the owner who came promptly that evening (on a weekend) and discovered the problem was from the faucet discharge leaking behind the wall and onto the concrete sub floor and under the adjacent flooring. He lifted the carpet up, tore out some of the wet pad, and we set a fan up to dry it. He said they would take care of all the damages, which are minimal. However, on Monday when I called to arrange repairs he stated that the tile man left the faucet off and since we replaced it that it is our fault and repairs were refused. I stated that the industry standard is to leave the area useable as it was prior to the work being done. At this point we could not use the shower due to the leaking and could not use it with it off, as he claims he left it, because there was no faucet at all!!! He offered to repair it but at our expense. A week prior to this occurring I called his phone and left a message asking for the bills/receipts and the patterns and colors of all materials but was not provided that. At this point, I do not know what materials were used, do not have a written contract, receipt, or warranty and cannot get the owner to respond to our requests. I have since spoken to a plumber who advised that an offset should have been installed on the inlet pipe prior to installing the tile to accommodate the thickness of the backer board and tile and allow the faucet outlet to be threaded properly. To do this now would entail removing all the tile in that area, clearly not something that the buyer should be responsible for. The plumber is going to try and fix it as is. In the end, the total damage is about 24 sq. feet of laminate and a few square feet of carpet pad and the plumbing repair but the owner refuses to repair it and we have taken pictures of damages and sought legal counsel.

1-800-Plumber +Air is located in Huntsville, AL and is focused on being the BEST! It's not about being better than everyone else, instead our focus is on providing you with the fast, dependable plumbing and emergency services when you need it most. Our goal is to give you the BEST experience you have ever received from a service based business. The 1-800-Plumber +Air team has the expertise to meet your needs with an easy to remember name and phone number, so call us today for help with all your home or business plumbing, drain cleaning, and heating and cooling needs.  …

We have specialties in electrical installation as well as remodeling of your home. We are experienced in installation of electrical vehicle charging stations, back up power generator systems, and solar power systems for off grid or backup power. We have the experience and dedication to bring your dream home remodeling project to reality! Our team has quality experience in a diversity of trades. This gives us the ability to handle all your home improvement needs from hardwood floors, to tile kitchens/bathrooms, including any other expansion or renovation projects you may need without the need for subcontractors. Our company is locally owned and is comprised of qualified tradesman that have all had a background check, and our workforce is comprised mostly of veterans. All our tradesman will treat you and your family's home with the utmost professionalism. Everyone we employ speaks English, and you will have no problem communicating your desires for your project, from the top down. We guarantee your satisfaction, and we won’t leave until the job is done right. Call or click to schedule an estimate today!  …

Welcome to 2D Flooring & Tile, where our first priority is YOU. Listening to your needs combined with our flooring and tile expertise is how we deliver a great experience and beautiful floors and tile to fit your walk of life. We are based in Huntsville, and service nearby areas. Our services include the removal and installation of all types of flooring including, but not limited to Hardwood, Ceramic Tile, LVP, Engineered Wood, Laminate, Carpet and more! We also include the service of full bathroom remodels!  …

Changes Flooring & Paint is currently rated 4 overall out of 5.

No, Changes Flooring & Paint does not offer eco-friendly accreditations.

No, Changes Flooring & Paint does not offer a senior discount.