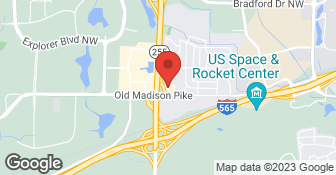 Budget Roof & Restorations LLC is a complete Home Remodeling Company specializing in Insurance Restoration work in the Storm related Industry. Including,floods,hail,wind and ice,tornado and other related disasters. As well as general contractors in all remodeling needs.

They gave me a good price, but they screwed up a bunch of times and had to come out to fix stuff. The quality of work was not that great. They were quick to fix things. They had a crew out there, and some of them were pretty whiny about fixing things they messed up. I would use them again depending on the work. If it was a direct replacement, sure I would use them. If it was anything extra out of the ordinary, I think they screwed up. I don't know it's up in the air. I'd probably won't use them again. I would only call them on a 100 day warranty or whatever.

Description of Work
They did roofing work.

They have never scheduled to do the work... It's raining or they are to busy to honor the agreement. But they will take your money. Very sarcastic emails.

Description of Work
Sent two guys out to look at the device and I was told they would come back to perform the work by a better qualified person. So they have done nothing except delay and never called to set an appointment

MY COmpany did not do this work , and I'm applaud at Angies list for not calling me
5.0

Description of Work
Installed roof vents and repaired storm damage on roof. Showed up on time and completed the work just like they said they would. Negotiate the price when you can

Thank you so much Kimberly
5.0

The owner, John, advised me that my roof had hail damge and needed the shingles replaced. He assisted me in contacting the insurance company and scheduling an appointment with one of its adjusters. The adjuster arrived, inspected the roof with John, and concluded that only one half of the roof sustained hail damage and that is all the insurance company would pay for. John was not satisfied with the adjusters conclusion and suggested I contract the insurance company and request a second adjuster review the conclusion.Once again, John was there when the second adjuster arrived. Five minutes after getting on the roof, the second adjuster came to my door and apologized for the first adjusters conclusion. He stated the whole roof had hail damge and the insurance company would cover the cost of a complete shingle replacement. John had a crew on site withing a couple fof days and the job was completed in one day. John's crew was very professional and when they left, there was no sign they had been there except a brand new quality roof!!

It went extremely well and was completed in just a few days with no inconvenience to us at all. All of my neighbors loved how the new roof looked and commented on how quickly the job was completed. I would recommend this company to anyone.

Description of Work
Removed the old shingles, repaired some of the underlayment boards, re-shingled the roof and added ridge vents to help cool the house down in the summer months.

I had some wind and hail damage from the storms in April 2012. My insurance adjuster came out and wrote up a claim and issued me a check. Called Floor2Roofs for an estimate on a metal replacement instead of the standard asphalt shingles. They wrote it up and stuck to the agreement. No problems.

Description of Work
Replaced storm damaged shingle roof with a metal roof. Professional crew. They did not leave a mess behind. I will be using them to replace my gutters soon.

We take great pride in our experience, expertise, quality, and customer service that we provide to meet the consumer's custom needs. It is our mission to provide excellent workmanship and complete customer satisfaction from start to completion of a project. In order to understand the needs and expectations of our customers, we take great care to work and communicate with every customer in a professional manner. Our reputation is based on service, safety, and quality, regardless of how large or small the job.  …

24/7 Emergency Response.No job or Disaster is to small or Large for Budget Roof & Restorations LLC to respond to. We pride ourselves on skilled, efficient, specialized work force to handle all your remodeling or storm related needs.

we do not wash windows :)

Budget Roofs & Restoration LLC is currently rated 4.1 overall out of 5.

No, Budget Roofs & Restoration LLC does not offer a senior discount.

Budget Roofs & Restoration LLC offers the following services: 24/7 Emergency Response.No job or Disaster is to small or Large for Budget Roof & Restorations LLC to respond to. We pride ourselves on skilled, efficient, specialized work force to handle all your remodeling or storm related needs.

Are there any services Budget Roofs & Restoration LLC does not offer?

we do not wash windows :)