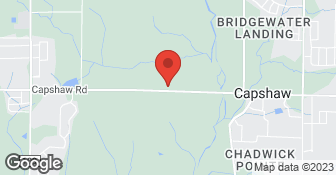 He didn’t like a review a woman with a similar name as mine had left, so instead of confronting her, he found me at random on Facebook and has threatened to sue me if I don’t take down the bad review I didn’t write in the first place.

Heath and his team did a great job.

Description of Work
Reworked my back deck, new boards and posts plus shored up what was unstable.

Description of Work
Currently adding a storm shelter and building a pergola(craftsman style).

In March of 14 Heath Davis Construction came and provided us a proposal to repair the paint problems on our home. We had three other estimates (and should have gone with Certapro!), but they seemed to understand the problem better than the others and could repair the entire problem (at least we believed that at the time!). So they took about a month installing flashing on all the windows, then sanding and repainting. The painters had to return several times as they first did not do the work correctly (failed to sand and left huge marks all over the house), then finally had it done satisfactorily. But they left a big mess, which they again had to retire to repair. In April of 2015, the problem recurred. We called Heath Davis and after several weeks, he came to our home to review the work. At that time, he stated he needed to return to the house during the rain to ascertain what was happening--it was clear to us what was happening...the exact same thing they "repaired." He never cam back during the rain. We called, and emailed several times over the next couple of months requesting they return and stand by the Warranty they provided. At first (and in email) they stated they would fix it. Now, they are stating it isn't covered by the Warranty...are you kidding me? The EXACT SAME PROBLEM recurs and they somehow can conclude that it's not the same problem? It is mind boggling! Anyway, I will update this as we move forward. I have filed a BBB complaint and am getting ready for court. Very unfortunate that what seemed like a good family owned business turns out this way.

Description of Work
Provided proposal to repair paint problem on our home. We have painted hardi plank siding that somehow water got between the paint and the siding during rains. The paint bulged during rain, then sagged after rain. Heath Davis said the windows needed flashing and that once done, and painted, the problem would be fixed. Not so! Ten months later, the same exact thing happened on our home. We had requested, and received, a Warranty for the work, which they are not standing by.

It went well. I met with Heath Davis Construction (HDC) to get an estimate for the removal of several pieces of concrete that had been dumped/left and buried on a lot that we purchased. Upon meeting with Heath, I pointed out the work I wanted done and we agreed on a fair price. Heath also gave me the option of purchasing a load of dirt to fill the holes which I agreed upon. After our agreement, Heath sent me a quote which we agreed on. We setup a time and Roy from HDC came on time and began work after I showed him the pieces that needed to be removed. Started quickly and expertly. He avoided the things that I wanted not messed with. One of the pieces of concrete was much bigger than all the rest and I was amazed that Roy was able to get it out and on the truck. Roy was able to get all the pieces of concrete and a tree trunk in his truck and that was that. Roy also did his best to mitigate the ruts that were caused by the removal process. There was a little more damage in a few places than I would have liked but those marks are directly attributed to the size of the last two pieces of concrete and I don't know how it could have been avoided. All in all. Good work and a fair price.

Our own inspector inspected it at different levels of construction, and he only has rave reviews about it. He has done a magnificent job. We had other bids on the project and we selected him, he was the low bidder on the project.

Description of Work
We used Heath Davis. He built our 2 and half story garage, and all of the inspectors rave about it.

Description of Work
a representative came out to house for survey to provide an estimate...5 days later no estimate...sent an email indicating I was looking forward to their estimate...received email with a one page estimate. level of detail was--- "sunroom kit" $$$$...I replied to email indicating the estimate lacked detail and indicated I would like a drawing showing the work and ended with standing by for your reply....still waiting for any sort of reply after 7 days...actually not waiting anymore probably going with one of their competitors..

Heath Davis sent his guys to our home at the appointed time and finished the work when he said that he would finish. Josh, the lead carpenter, did an outstanding job in leading the crew. The guys were professional, courteous, respectful, etc. The guys did such a transformation on the house that it has "wowed" the neighbors. I never had to give them a check list to finish. The guys went over and beyond the call of duty. Awesome is the word that comes to mind. Thanks Heath Davis.

Whenever they were at the house they were very professional and worked hard. They completed their work in a short time (compared to our neighbors who had damage). We were very pleased with their work and would contact them for other work.

Description of Work
After our home was hit by several tornadoes on 4/27/2012 Heath Davis Construction was the company our General contractor used for the repairs.

Description of Work
Timely estimate. Great communication with us regarding quotes, start dates. Great price compared to others we inquired with. Work met our expectations but time alloted for them to complete the job was underestimated causing them to work late into the evening. I would definitely recommend them for a job and would expect that no one can beat their pricing for the workmanship they provide.

Quality Pressure Washing offers quality work and competitive pricing on all your pressure washing needs. We offer free estimates on driveways, patios, decks, houses, vinyl fencing and much more. We have been in business since 2018 and pride ourselves on professional and friendly service.  …

No, Heath Davis Construction Co. Inc. does not offer a senior discount.