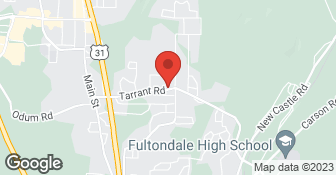 We are company that specialize in HVAC, Plumbing, & Irrigation and do various other contracting jobs. We have been in business for over 3 years and are licensed, bonded & insured by the State of Alabama Boards. We have 10 technicians and 6 vehicles. Our company provides services 24 hours a day and 7 days a week....

Ethridge Heating and Air is a local, family-owned and operated company. We have been serving Birmingham and surrounding areas since 2002, when Jamie Ethridge established the company. Jamie personally has over 25 years in the HVAC industry. After working in the industry for several years, Jamie decided to create a company that is focused on personalized service where personal comfort and quality work is of the utmost importance. Throughout that time Ethridge Heating and Air has kept pace by continually working to offer our customers the most effective, energy efficient HVAC, Birmingham, AL has to offer. At Ethridge Heating and Air, we pride ourselves on our excellent customer service, quality, and professional employees. All of our employees are experienced, licensed, and insured. We perform extensive background checks and drug screenings to ensure you work with the best in the industry. We offer financing for new installations.  …

**$48 SERVICE CALL or TUNE-UP Special (per unit)**Perfect Service has over 50 Employees & over 23 service trucks running on a daily basis. We have 24/7 emergency service. We offer financing through Alabama Power, Spire, Wells Fargo, and Turns. We accept cash, check, & credit card as forms of payment. We are an Elite HEIL equipment provider  …

We are a company of Integrity and Honesty which is the backbone of our core values and beliefs. We offer Residential and Commercial services.  …

If I could give a lowet rating, I would. This company showed up in response to my home warranty. I had a heating issue on my main level back in January. A day or two later, a man called me saying that he was with this company and said he'd be at my house around a certain time. When that was agreed on, he asked when my house was built and if it was the original unit. I said yes. He showed up, walked in with a pen and paper, wrote the part number down and then took my service fee and left. A few days later (it was pretty cold in January and February) I had to call my home warranty to figure out what was going on and they told me that I needed a new unit and that they would cover X amount of dollars but the amount of modifications equated to $650 out of pocket because all of the duct work in the area had to be reworked... A month and a half later (today) the man come by himself and completes the job in probably an hour. Hour and a half if you count cleanup and paperwork. Looking at what he did, the "modifications" that cost me $650 was him using Tim snips to cut out about a foot of existing duct work, retaping it, putting a new flex gas line, and a step-ups adapter to connect to the existing vent. This material costs about $50 total, the most expensive item he used (and ran out which left most seams exposed) was the aluminum tape. When I called I was talked to like an idiot, was told that I paid for the Tech's experience, not his work or how little of time it took him, or the materials. As a former contractor, I know this to be BS. I know many HVAC, plumbers, etc and the evidence points to Cahaba Repair being shady. Speaking with my home warranty, I am told that the official report says that the technician came and diagnosed my unit and found it to be faulty and in need of complete replacement. He diagnosed that the home warranty company didn't check up on their contractors and that they would make some money on a replacement job. Period. The guy who answers the phone will likely respond saying how little I know about the field of work, but he's wrong. This company is Shady and will take advantage of you and your home warranty. Beware.

Everything was great from beginning to end!

I had used this company four times over the last 2 years. The first time they were quick to respond. They repaired the issue with the AC unit in 15 minutes. I was impressed. The second time I was not impressed . I seemed to get the run around as soon as they realized the property was under a home warranty. It took almost a week to get the repairs done. This required replacing the entire inside unit of the AC. Part of the problem was waiting on the warranty company to authorize the work.( Not their fault.) The other problem was the company would NOT answer my calls or return my calls when I was trying to schedule the job after they had the go ahead from the warranty company. This was very frustrating! The third time I used them in Dec 2014 , they again responded quickly. It was an outside wiring issue the repairman found immediately. I used them again in May 2015. The repairman did not show up at 9 am as scheduled. They did reschedule for 5:30 that afternoon. Again, it was a problem with the outside wires. ( We suspect an animal is chewing the wires or the lawn crew is cutting them while weed eating.) Another problem with the AC came up in June 2015. I called the office & managers' cell phone 4 times in one day & did not get an answer or a call back. They already knew at the May repair the property was not no longer under the home warranty & I would be paying for the repair myself.After not getting a call back all that day or the next morning, in the afternoon I signed up on Angie's List & found another AC repairman. He was at the condo in 30 minutes & quickly diagnosed the problem. & repaired it. The NEXT day, Cahaba Contractors called me about my needed repair! Called me by the wrong name & offered NO explanation as to why they had not answered any of my calls or messages the day before!. If you are too busy to answer the phone , you probably don't need my business. I can understand a family emergency or something similar, but to just ignore your customer, and a repeat customer at that , is not acceptable to me. They were only timely 50% of the time . I will not use them again.

Description of Work
Repaired wires on outside of AC unit.