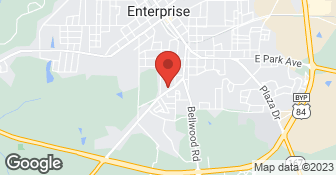 Description of Work
Beckham installed our septic tank several years ago and did a great job. Responded right away, professional and reasonable price. We have since requested an estimate for a gravel driveway, they came right out and gave us an estimate which we were happy with. We haven't done the driveway yet for our own reasons, but will most likely call Beckham when we are ready to do it.

Mr Beckham told me I would have to repair my fence after he laid the Sewer Pipes and connect them with the new City Sewer by the street. I decided to go with another service.

Description of Work
Provider hesitated about working around the fence.

Description of Work
Beckham Septic Services excavated my driveway for the garage.

Tim Beckham is the name of the owner and he's a great dude. It's friendly service and they bend over backwards to accommodate me. They had to bring out a bunch of extra hoes so they wouldn't tear up my yard with their truck and they did that with no problem. They're very knowledgeable and they taught me a lot about my own system. They were happy to explain everything to me that they were doing and the parts of the system. I suggest that people don't call anyone else but them.

Description of Work
Beckham Septic Tanks has helped me out several times. I've bought top soil and gravel from them. I've also had them service my septic system.

Not good for me.

Description of Work
I used them once for septic cleaning and will not use them again. Price too high plus they appeared to take shortcuts.

Crew showed up early as promised and immediately began working. Very professional, very polite, didnt mind answering a million questions from me while working. Everything was done with good worksmanship, took pride in most tiniest of details regarding fitting and long term function. If I have any future issues with my tank or even for routine services, this is the company I will be contacting.

Description of Work
While doing yardwork, I broke a pipe that went to my septic tank. I was unsure of what the pipe was actually for and called the company to come check it out. As a courtesy, they came out immediately and we figured it would be a simple fix. Although it wasnt something the company normally does, he agreed to come out and fix it for a very fair price. Next day, while inspecting pipe to be replaced, it was determined the problem was larger than I originally had thought. The septic tank was actually close to backing up due to it not being maintained properly over the years. This would have been catastrophic and potentially very expensive if left unchecked. Due to being thorough, this company saved me money in the long run. Yard was dug up, PVC pipe was replaced, existing pipe was leveled off to prevent future problems. System was inspected for serviceablitiy. Filter was cleaned and existing fittings were sealed. They were careful to replace dirt and clean up after themselves.

With 60years of combined experience, we offer land clearing services, demolition, debris removal, water control due to grading issues, and we even build access roads, clear for food plots, clear shooting lanes for your hunting property, and so much more. So for all of your land management needs let us be your 1st call because we do it all.  …

Beckham Septic Services is currently rated 4.3 overall out of 5.

No, Beckham Septic Services does not offer eco-friendly accreditations.