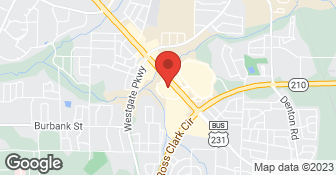 I still have spiders and ants outside but the exterminator comes back when you call. It's hard to tell how successful the treatment is since we've had a lot of rain.

They did show up and went thru the house for what I thought was a evaluation and free inspection. After they completed (20 min) they responded with a bill for $80 saying they didn't tell you there was a fee for this inspection. When asked if anything was found he said "not what they have seen." When I asked about what if there were, they responded with a plan costing I believe 1500-3000.00 where they would drill holes in my floor (concrete slab) put poison in then my responsibility to replace flooring. I denied the service, paid the bill ending this involvement, they may have called the next day asking if I had changed my mind. I called another pest control and they stated that they would only plant poison around the house outside in the ground. That would ensure all termites if any would be destroyed.

Description of Work
I asked to see if there were any termites in my house and if so what would be needed to remove them. I am planning to sell the house and was making sure there were no issues with the property/

They'd come immediately when I called them, but their chemicals didn't seem to work. They couldn't really take care of all of the issues.

Description of Work
They did my pest control.

Description of Work
They do our pest control. They could use more tact with payments - sometimes when we get paid doesn't coincide with when their payment is due. They could work with the customers more on payment and not be critical of the customer's situation.

Description of Work
They come in your home on the first visit and put sticky traps where bugs may lurk. Afterward, they spray outside the home to keep bugs from entering . Nothing is sprayed inside your home . The serviceman is friendly and will address any special problem you are having.

I have dealt with them in TN as well and would highly recommend this company. They will come out and do a free estimate and house mapping.

Description of Work
We have three different services with Cook's. Pest, termites and Mosquitos. All services are comparable in cost but I think the overall customer service and professional sets this company apart from all the others! They stand behind their product and services and have been a pleasure to deal with!

Description of Work
PUT DOWN ANT BAITS.SPRAYED FOR SPIDER WEBS.CHECKED TRAPS IN HOUSE.

Our experience has been good. They wore little booties on their feet. They did not mess up the floor and did a good job. We did not have any more bugs.

Description of Work
We used Cook's Pest Control. They just did pest control.

Description of Work
I called and asked for a service person to call me. He never called back! I told them I was in dire need of spraying.

I was very disappointed in the service that Cook's had been providing at my father's home. There were still spiders living around the door frames and bugs (ants and roaches) on the back patio and carport areas. Apparently my elderly father only had outside service but you could not tell that there had been any service at all, and not to mention it was a monthly service that he was paying for. I felt that they were just taking advantage of an elderly person's trust in doing a "good job" and unfortunately my father was never one to complain. I cancelled any future services with them and would not recommend them

Their level of service depends on the technician I get. I had to complain about the first one I had so they changed the technician, but their overall service and attention to detail was spotty. I don't use them any more My frustration was why should I pay someone and then have to check on their work.

Description of Work
I used Cook's Pest Control for pest control. They sprayed and left traps.

They spray inside and outside of my home, we have a monthly package. I am satisfied with them. They come when they say they will. They work around my schedule. They are flexible.

Did not use them, they do not provide animal removal.

Description of Work
Did not use them, they do not provide animal removal.

Excellent service. They are some of the nicest pest control people in Dothan. We bought an older home and had some significant bug problems from the previous owners. Cooks was willing to work very hard the first two months of service to knock out the pests and now we are on a much more normal prevention plan. There was no extra cost for the additional visits in the first few months.

They were very good. They were professional, friendly, and helpful. They are attentive to your needs.

Description of Work
I used Cook's for pest control services. The service is ongoing.

They come out when I need them, all I have to do is call them. I have been using them for three years.

Description of Work
I use Cook's Pest Control for pest control service at my home.

They are very professional and very good.

Description of Work
I use Cook's Pest Control every month.

They are very friendly and concerned. I had a bad problem with roaches at one time, and he came right out to take care of them. He had the roaches taken care of within 2 months and told me to call him if I had any more problems with the roaches. If I call him, he calls me back right away. I have been using for the past five years.

Description of Work
They provide pest control services for me.

Description of Work
I used Cook's Pest Control for pest control and extermination services. They come out once every month.

If we need internal spraying, we just need to let them know and they will do it right then. I like their work but their price is a little high. I will possibly be using them in the future.

Description of Work
They come out once a month to spray the yard.

They always call ahead and let me know when they are coming. They ask if there are any particular problems they need to address. They leave a note when they are done. They come on time and they automatically deduct the bill. The pricing is fine. They are very friendly and very nice. I will absolutely continue to use them.

Description of Work
I use Cook's Pest Control monthly for pest control.

We would recommend them. They are very nice and professional.

Description of Work
We use them for routine spraying for controls of spiders and bugs.

They give you good advice to help you steer away from termites. High quality service and professional people.

Description of Work
Put boxes in the ground and came back to check on them. They call to make sure it is ok to come out to follow up. The do termite prevention for us. We are signed up for a yearly contract with them. The will do a whole house inspection to ensure there are no termites. They guarantee if they find termites under contract they will take care of everything at no charge.

Cook's Pest Control is currently rated 4.3 overall out of 5.

No, Cook's Pest Control does not offer eco-friendly accreditations.

No, Cook's Pest Control does not offer warranties.