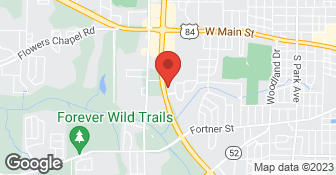 He was not on time with any of the work. The inside and outside units did not match ,they were to be new but were over four years old. The first heating bill I received ws 550 dollars for one month. I had to call Pippen heating and cooling to put in a new unit. Have been very pleased with it ever since. My heating bill has never gone over 250.00 since I had it replaced

He said it would take 3-4 days, it was six weeks. The inside unit was always flooding the hall floor, almost every day. I would call and he would not come when he said he would. Maby he would come in 2-3 days or not at all. I had to call another contractor Kevin Pippin, to come and install another air return vent. It needed twice the return that was installed. That stopped the flooding. The cooling unit did a good job the rest of the summer, My first heating bill was 560.00 dollars. I found out he but in an old unit, and the inside and outside did not match. I have had Pippin come and put in another unit and redo all the duct work in the attic. The duct work was a big mess. It cost me 6,000.00 to replace the duct work and have a new unit insde and out. My next heating bill was for Jan. 2011 and was only 215.00. Mr Pippin also found a lot of electrial problems that Dainal Chickarollo created. I would not ever recommend this person Chick's Heating and Cooling to any one. I also called the State Board and had an inspector come to my house.

Description of Work
We had him install a heating and air conditioning unit and the duct work in our home.

After calling SEVERAL local companies that wouldn't show up or call back, we expanded our search to include Dothan, AL, the next closest city to our home. Danny said he would show up and he did. However, he was chronically late by several hours, but this did not hinder our schedule, so we didn't complain and it was not an issue. WHEN ALL WAS "done," we found sloppy cutting around the vents, NONE were taped, the air leaked out EVERYWHERE, our first bill on our 2,000 sq ft house was $500...partial month, and NOT running 24 hrs a day. The unit is the size of one you would see on a commercial bldg. I had to clean up after them, they left trash in the yard. Another CH & A Co. asked why the ductwork was not run in the attic, that mold and mildew will be an issue in the future. The other Co said that the unit was all wrong and asked why we didn't go with a split unit, which is what we wanted to do, but Danny convinced my husband that this unit would be more efficient and economical and it has been NONE of that. It is so expensive, we cannot use it at all. We are back to our window units. When we attempted contact with him after the job was done, he wouldn't answer our calls and on an unexpected number he didn't recognize he said he talked to a lawyer and said he didn't have to talk to us anymore. When we asked for his lawyer's name and number he refused to give it. We are seeking to complain with the state and to bring legal action.

I am thankful to have this chance to retort. This particular customer has a very old uninsulated house. We performed a manual J calculation on this structure.A manual J calculation takes into account all aspects of the structure and computes all of this information in to a tonnage amount. This structure computed to 9.8 tons which seems like a lot for a house , until you take into account there are 16'ceiling little to no insulation etc.. I explained to the customer that it would take 10 tons to heat and cool this structure, the customer didn't agree with this so I made him sign an agreement that states he is aware of the tonnage requirement and the fact that any type of comfort or efficiency would not be achieved with half the tonnage that he/she insisted that I install. I have this signed agreement in their file and this complaint has zero validity other than the customer made the wrong decision. I do regret that the customer made the wrong decision and I hope one day they will listen to the professionals.

Are there any services Chick's Air Conditioning & Heating Service does not offer?