Mr. Appliance Over the Mountain 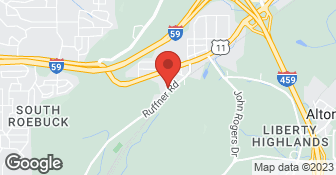 It was excellent! He was able to fix it within 2 hours. He was in clean cut, wore his uniform, and well spoken. Everything you could ask for!

Description of Work
He fixed my stove.

On time both time and price was okay

Works great since repair was done and new part was installed.

The repair was on time and polite. I would definitely hire again.

Description of Work
The dial on my washer was broken.

Out of all the ones that were to come, none came due to not there area. So why are they on it to service Northport Alabama. Maybe you need to update. Same problem last time I tried Angies List, so I will not be using this again. Not good service.

Description of Work
none did not come

I called on Thursday the 8th of August and the repairman was available the following morning. Arrived on time and diagnosed the problem quickly. Had to order a part and returned the following Monday (09-12-19). Installed the part and tested the machine. Worked as it should. A job well done and in a timely manner. Thanks so much!!

Expense to repair was greater than the cost of a new washer. Options were discussed.

I had a refrigerator water line break and flood my kitchen. I found Mr. Appliance on Angie's List, called them, and they had Colby out to my house within a couple of hours. Colby was right on time, very professional and knowledgeable and was able to have my complete repair done in a couple of days (he had to order a part). To add icing to the cake the price was reasonable!

Appreciated the notification text showing a picture of the technician and estimated arrival time. Our technician was respectful of our home, polite, explained everything in detail and worked in a timely manner. Best of all, our dishwasher is working again at a reasonable price. Will definitely use Mr. Appliance again & recommend them to my friends and family!

Larry McDaniel (technician) had a real challenge with this one! The self cleaning latch was stuck and without the door open there was no way to get to the motherboard for replacement. He devised a way to bypass the circuitry and get power to open the latch. After that the new motherboard was installed and then the range top basically rebuilt. Thank you for great service and figuring out a challenging repair!

The repairman arrived on time. Was very professional & courteous. Would definitely hire again.

Description of Work
Reverse the door swing on refrigerator & freezer

The repair tech arrived on time and fixed the gas oven that was not lighting properly. He was nice to deal with and promptly made the repair.

Repairman came and was able to fix a loose connection on the igniter. The cost was essentially the cost of the service call.

Description of Work
Burner on Dacor Gas stove top would not ignite.

I had already looked online prior to visit and decided that it could be a frozen drain so I unplugged fridge for 36 hours and removed ice. Tech. was very nice and said that is what he would advise or do himself if I wanted him to. I decided to try this and arrange another service call if this didn't correct the problem. I was not charged a service call and would highly recommend this company.

Description of Work
fridge leaking and frost in freezer

The technician was fabulous, went above and beyond to resolve my issues. Would recommend to anyone!

A service technician came out within 24 hours after calling them. He had to order a part for the repair. He came back the next day with the part and completed the repair.

Description of Work
Washing machine was leaking water onto the floor.

Thank you for your business, [Member Name Removed]!
2.0

This my response to their satisfaction survey: During my most recent visit, the employee did not inspire confidence. He did have on a uniform shirt; but did not do any of the things that the first two guys did, as far as putting covers on shoes, or anything else. Although he said he had many years of experience, he did not seem sure of himself. Did not listen to the full problem or my questions before he went immediately to the icemaker, taking it apart, to check for power to it. I had made it clear that the water filter was stuck, due to a previous service visit from ya'll ( the piece that pushes the filter out was broken by the first one that came to work on it, months ago). I told him that the icemaker was probably not making ice, due to the expired filter and asked him to take it out and put in the new one I had; but he instead began to take the icemaker apart. He checked the power to it, and said I NEEDED A WHOLE NEW ONE. I stated that there was no way I could afford that, and to just put it back together (which he had a LOT of trouble doing). Still was asking him to replace the old filter, and he finally did. He needed adjustable pliers to pull it out; but the new one went in, fine. Full charge for the visit, as he said it was not warranty related. Within an hour of him leaving, the icemaker was working again! I can provide a dated picture as proof. Worked well for about a month and a half and now has stopped again. Honestly, out of the 3 different repairmen ya'll have sent, the first and this guy were not great. Only the second guy ya'll sent, was on the ball. I'm once again back to buying ice, and after much work and expense, I'm just about right where I started, months ago. Am very disappointed, overall, and will be updating my review on Angie's List.

Excellect, diagnosed and ordered parts. Replaced the next day.

Excellent service! We were able to get a next-day appointment. Scheduled online and within 30 minutes, I received a call confirming the appointment and providing a 2-hour window. I received a call on the day of to notify that the technician was on his way. He discovered almost instantly that it was a faulty lid switch. Although the technician did not have a switch on his truck, he left and returned with a new one within 30 minutes. Provided the cost first to allow me to decide if I wanted to continue with the service. Very prompt, professional, and friendly service. I highly recommend and will use again if needed. Forgot to use my Angie's List customer coupon, but still fair pricing.

Description of Work
Our 16 year old Kenmore washing machine would not drain.

Thanks for providing us the opportunity to give you great service!
5.0

Had part with him so was done very quickly.

Thanks for your business!
4.0

Fine. Technician was friendly enough but it seemed as though the repair 'evolved.' Took 2 trips - had to order parts. Not a big fan of my name brand (LG) but seemed less than complimentary about anything.

Thanks for your business! If there is anything we can improve on, please let me know!
5.0

The tech was spot on with what the problem was, very professional in his demeanor and knowledge of the equipment he serviced. I found much enjoyment in the orange booties but understood the why.

Description of Work
Our washer machines bearing finally wore out and needed replacing.

Thanks for the opportunity to serve you!
5.0

Did a great job, on time, followed up when another part was needed, no charge to return and install it.

After estimate it was not worth fixing.

Well, after two techs and 6 visits, the icemaker was fixed and fridge side door gasket replaced. Long story - Tech #1 misdiagnosed the problem as door gasket causing the problem. Replaced it... didn't fit well. Replaced it again, the magnet came out of the bottom. After that, I requested another tech, named Marc, who was on the ball. Even so, with parts ordered, etc. it took 3 visits to get the icemaker fixed. Marc put the gasket on correctly and the fault was finally diagnosed as a cracked water line to the icemaker. I would use them again, for sure. They never gave up until it was right. After the first visit payment for the gasket replacement, they didn't charge anything for subsequent visits.

Description of Work
Icemaker was not working well

Thank you for your business! It does not happen often, but like you said, we will not give up until we make it right with our customers!

No License Required for Trade
Bonded
Insured
All statements concerning insurance, licenses, and bonds are informational only, and are self-reported. Since insurance, licenses and bonds can expire and can be cancelled, homeowners should always check such information for themselves.To find more licensing information for your state, visit our Find Licensing Requirements page.
General Information
Free Estimates
No
Eco-Friendly Accreditations
No
Payment Options
American Express, Discover, MasterCard, Visa, Check
Senior Discount
15%
Warranties
Yes

Frequently Asked Questions & Answers about Mr. Appliance Over the Mountain

How is Mr. Appliance Over the Mountain overall rated?

Mr. Appliance Over the Mountain is currently rated 4.8 overall out of 5.

What days are Mr. Appliance Over the Mountain open?

Mr. Appliance Over the Mountain is open:

What payment options does Mr. Appliance Over the Mountain provide

Does Mr. Appliance Over the Mountain offer free estimates?

No, Mr. Appliance Over the Mountain does not offer free project estimates.

Does Mr. Appliance Over the Mountain offer eco-friendly accreditations?

No, Mr. Appliance Over the Mountain does not offer eco-friendly accreditations.

Does Mr. Appliance Over the Mountain offer a senior discount?

Yes, Mr. Appliance Over the Mountain offers a 15% senior discount.

Are warranties offered by Mr. Appliance Over the Mountain?

What services does Mr. Appliance Over the Mountain offer?

Are there any services Mr. Appliance Over the Mountain does not offer?