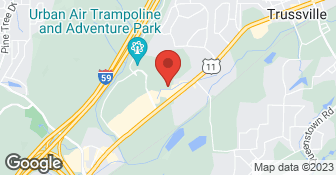 It worked at first. I was gone for a week and it did not work when I came home, Called then and service came that afternoon. Bad motherboard. Replaced at no additional charge. Still working fine.

It's so refreshing to have a service person that cares about his quality of work. I am an older retired person that have been thru a rash of repair needs. Storm damage to roof, gutters, deck, interior kitchen(water damage). Even lawn care because of lawn mower down. It was forever stressful trying to get people to do a decent job, but with Tom fixed my door with expert ease and then more. He replaced the drive shaft and bad pulleys. He also reprogrammed my remote which been down for weeks. Thank you guys for what you do.

They did a great job. Couldn't have asked for better. Thanks!

[Member Name Removed] Thanks for the kind words and we appreciate your business. Joe & the Team
5.0

Awesome! (a) I had read about Angie's List in the NY Times a couple years ago, but this was the first time I'd tried it - so A+ for Angie's List (2) The guys showed up a little TOO fast - I hadn't expected them for a couple more hours, since I just called them about noon. They got a team to my house in an hour and a half!!! When they got here, they said, and quot;Dude, we are going to have to break your lock. Are you okay with that?and quot; (I]m paraphrasing) Since there was no other way in, they basically had to break in, but they did so without damaging anything other than the lock itself. Glad they are honest working guys! :-) They found the circuit breaker that had been tripped (I suspect the kids, but then, I ALWAYS suspect the kids), performed a bit of maintenance on the doors, and that was it! They were done in 20 minutes, which was great since I was trying to get to work and pick up a Boy Scout uniform. Two thumbs up!

Description of Work
Opened my garage doors, even though the motor had no power and I didn't have the key for the disengage mechanism

Thanks so much for the positive review.
5.0

They were excellent. They showed up when they were supposed to and they did a good job. Their pricing was fair.

I found a brochure in Costco, called the number on it, and then they sent a representative from Magic City Door, their contractor, out to make an assessment. We still had the door original to house, very heavy and noisy. We had to move a lot things out of the way, but they gave us a day's notice. They did the installation in under two hours.

Description of Work
We ordered a double garage door, and there were several attractive styles from which to choose. The hardware and windows were customizable. It actually came in, once ordered, much more quickly than we were expecting, and the two men installed it in under two hours.

Thanks for the kind words and we appreciate your business. Joe & the Team
3.0

Were on time but could not figure out the problem.

Description of Work
They came out to look at my garage door but could not tell me what was wrong with it. Spent 15 minutes, charged me 65$ and walked off.

I replaced my noninsulated metal garage door for a insulated metal door. I purchased a Wayne-Dalton door because it's the best on the market - well worth the extra dollars you'll spend.

Description of Work
The service received was exceptional - they were on time, professional, cleaned up, and hauled away the old door. I have highly recommended this company and this door to my friend, neighbours and family.

They arrived right on time. They told me the spring was fine and the opener only needed to be tensioned, which they did for less than they quoted. They were efficient and professional, and if they had replaced the spring and charged me more I wouldn't have know the difference, so I appreciated their honesty.

Description of Work
Our garage door opener had broken. We asked them to replace the spring and whatever else needed to be done.

They were on time and it took an hour and a half altogether for both times. I am going to call them tomorrow and ask them to come and request they replace the garage door. I am frustrated because my garage door still does not work properly; it just goes up 1/4 of the way and stops and if you push it will go down again. They did not provide a detailed explanation of what needed to be repaired. I've paid $45 for each service call.

Description of Work
They worked on my garage, twice, and I am calling them as the garage door is still not working properly. I wasn't here when they did it so I don't know what they did. The first time it would go up and down continually without stopping and it smelled like it was burning so they fixed that and now it will only go up 1/4th of the way.

We specialize in garage doors and electric openers all makes and models and more! We guarantee customer satisfaction, and we won’t leave until the job is done right. We pride ourselves on the quality work we provide, while delivering great customer service! Check out all the services we offer below and call -or- click to schedule a free estimate today! 20 years experience. We are a Clopay dealer and offer the highest quality products.  …

Bonded
Insured
All statements concerning insurance, licenses, and bonds are informational only, and are self-reported. Since insurance, licenses and bonds can expire and can be cancelled, homeowners should always check such information for themselves.To find more licensing information for your state, visit our Find Licensing Requirements page.
General Information
Free Estimates
Ask for Details
Eco-Friendly Accreditations
No
Payment Options
Check, Visa, MasterCard, American Express, Discover
Senior Discount
No
Warranties
Ask for details

Magic City Doors is currently rated 4.7 overall out of 5.

No, Magic City Doors does not offer eco-friendly accreditations.

No, Magic City Doors does not offer a senior discount.

No, Magic City Doors does not offer warranties.