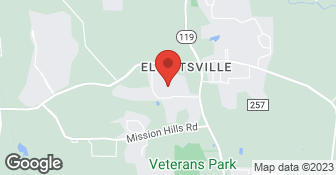 Handyman service - no job too big or small! Call today for a free estimate.Veteran-owned business. We take great pride in our extreme professionalism, timeliness and superior customer service on every job. We develop lasting relationship so that the next time service is needed there is no question on who to call. Satisfaction is guaranteed! Call us today!

We take pride in providing the highest quality general handyman and painting services in Birmingham, AL. We aim to give our clients a wonderful and pain-free home repair experience, while producing complete and satisfactory work that will please everyone involved. Check out our website, testimonials, and give us a try. You won't be disappointed!

He pushed me into the shower, got in with me, and closed the door - making a rude sexual remark and blocking my way out. Did shoddy work, and refused to fix it. When I called him about it, he became rude and threatened to sue me.

The member was a person who was turned down by a couple of other contractors when I got there she was wanting work done so cheap I would not agree to,when I asked her to sign a contract she was "insulted"said she had never had to sign one befor~she had me install shelves,then later that day say they were too low so I had her come make the spot she wanted it and reinstalled it~next day she wanted i...