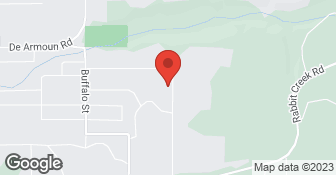 We are the premium bath surface reglazers in the state of Alaska. Our materials are developed and distributed by the largest reglazing franchise on the planet. Kott Koatings supplies and trains franchisees who buy a certain territory. They currently have franchises such as Superior Refinishing here in Anchorage in more than 125 countries. Please visit our website at www.AKTUBS.com...

I'm delighted with the results of Michael's work! This 46 year old bath tub looks brand new!! Michael uses a good ventilation system as he works, so only mild fumes linger after he's finished. I highly recommend this service.

Description of Work
Michael and son are professional, knowledgeable and positive people. They explained the process and always available to answer questions. They were also very respectful of our property and of us. They did an excellent job of converting my ugly worn out tub into one I'm proud to have guests use.

It went wonderful. The service was great!

Description of Work
They changed the color of my tub from avocado green to white.

After calling numerous refinishing companies, Superior Refinishing was one of two that called me back with a fair estimated price of $175 to repair two chips in my bathtub. I thought this was reasonable. I was told he would stop in Eagle River on the way out to the valley on July 23. He didn't give me a time, just said some time. I was just happy that someone could do the job for us, so I agreed to wait at home until he stopped by. Evening came around and still no call. I called the next day and he told me his job in the valley was canceled. It would have been nice to have a phone call to let me know he wouldn't be performing services that day so I could have gone about my day instead of waiting at home for him to show up. He then tells me he can fit me in between when I called the second time( July 24 ) and July 31. I never heard from him again and by that time I didn't even want to give him my money. I was amazed that someone could have such horrible customer service. I understand that when you call some companies based out of Anchorage they don't want to make the drive out to Eagle River. I would of much rather him just tell me and quot;Noand quot; like another company did then waste my time.

Description of Work
He did nothing but make me wait.

It is unfortunate that I cannot please everyone. I try very hard to. Being on the outskirts of my service area, I told [member name removed] that I would try to fit her chipped tub into my schedule if I could, and would call her if I had time to stop by and take care of it. Our primary business is complete reglazing of bathtubs and tile, and chip repairs are generally done as a discounted courtesy,generally just for home builders.This summer has been incredibly busy for us and it appeared that I may have an opportunity to help her out. I never promised her anything, but she is correct in the fact that a phone call saying "I can't do it" would have been nice, but people don't like that call either. Therefore, I would still have gotten this review. I can only hope that she finds someone to fulfill her needs.
5.0

Michael refinished our old motel room tub. He was quick and made the tub look brand new. We will use Superior Refinishing for any other tubs which we need refinished. Creekwood Inn

Michael at Superior Refinishing was personable, professional, very prompt in returning calls and on time for the appointment. He was respectful and careful of my home and floors, as he unloaded and loaded his equipment. His instructions were clear for the curing period of the tub refinish. It's beautiful! I can't give him enough high praise.

Our 70 year old cast iron tub had previously been refinished (by another refinisher) many years ago and was peeling on the bottom; this was a particularly difficult job. Superior Refinishing spent the time that was needed to do it correctly and at a reasonable price.

Description of Work
Our bath tub was refinished.

A Team specialized on Residential & Commercial painting and remodel, our qualified team have the expertise and drive to fulfill your needs. We have list of highly satisfied clientele in our portafolio. Thank you for your interest.  …

our company has been operating in anchorage for 5 years. we used to work at california for 15 years. Also we have general contrator Lic# 133160 for remodeling houses. we are not expensive, we are not cheap, but we're good at our job. thank you  …

Tile reglazing & regrouting, scratch and chip repair, tub and porcelain resurfacing & refinishing. This includes plastic and fiberglass tub/showerpans. All work is performed at your location.

How is Superior Refinishing overall rated?

Superior Refinishing is currently rated 4.9 overall out of 5.

What days are Superior Refinishing open?

No, Superior Refinishing does not offer eco-friendly accreditations.

No, Superior Refinishing does not offer a senior discount.

Are warranties offered by Superior Refinishing?

No, Superior Refinishing does not offer warranties.

What services does Superior Refinishing offer?

Are there any services Superior Refinishing does not offer?