Pros and Cons of a High Deductible Homeowners Insurance Policy

A high deductible homeowners insurance policy will save you money on your annual premium, but review these pros and cons of such a policy before you sign.

Your homeowners insurance deductible can be either a specific dollar amount or a percentage of the total amount of insurance on a policy.

A percentage deductible, which is typically higher than a standard flat-rate deductible, is based on a percentage of the home’s insured value. So if your house is insured for $100,000 and your insurance policy has a 2 percent deductible, you’re responsible for the first $2,000 of a claim.

If you’re considering a high deductible homeowners insurance policy, there are a few things to keep in mind:

Generally speaking, the larger the deductible, the less a consumer pays in premiums.

“It helps those who want to lower their premium and [are] willing to self-insure more of a claim,” says Suzanne Brown, owner of Suzanne Brown Insurance Agency in Houston. “If a policyholder doesn’t have a claim and saves, for example, $400 a year with a higher deductible policy, after five years they would save $2,000. That could help offset a higher deductible when the time comes.” 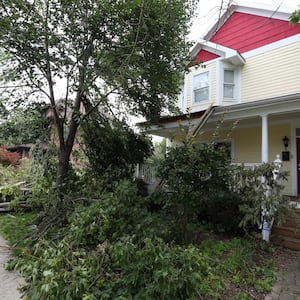 Can My Insurance Company Drop Me?

Ignorance is not bliss when filing an insurance claim.

Even if you have a smaller claim to make, the deductible is based on the insured value of the house. For example: If your house is insured for $100,000 with a 2 percent deductible, and a kitchen fire caused $5,000 in damages, you would receive a check from the insurance company for $3,000.

Insurance agents say having a policy with a higher deductible reduces the tendency to submit a claim for a small loss.

“A homeowners insurance policy may incur a surcharge after a paid claim or even be subject to cancellation if there are too many claims,” says Winfred Seymour, account executive of Humble & Davenport Insurance in Renton, Washington. “Because of these possibilities, it may be advisable to pay for the small loss out of pocket and save the policy for a large catastrophic loss, should it occur. Insurance companies are much more lenient with one major loss over time than with several small losses.”

While it might be tempting to request a policy with a large deductible in order to save on the annual premium, remember that you’re ultimately responsible for covering that amount.

“Having a deductible that is too high could lead to financial hardship or potential home disrepair,” Seymour says. “If you sustain a large loss and have a deductible that is more than you can afford to pay out of pocket, you may choose to not make or complete the necessary home repairs because you do not have the additional [funds] to contribute to the cost.”

A flat-rate deductible typically won’t change unless you request it, but with a percentage deductible, that amount will increase as the insured value of your home increases. And while those increases may be minimal year-to-year, it’s important for every homeowner to review his or her policy annually with an insurance agent to make certain the coverage includes current construction costs.

As a homeowner with a high deductible policy, you’re taking on more of the risk and willing to pay for the smaller repairs that accompany home ownership. This should give you a wide array of insurance companies from which to shop — just be sure to review policies closely and make certain you’re comparing apples to apples when looking for the best deal.

Editor's note: This is an updated version of an article originally posted on November 26, 2014.

Do you have a high deductible homeowners policy? Tell us what you think of it in the comments section below.