Timber frame homes may look like any other home from the outside — but they're extraordinary on the inside.

Once you enter through the front door of a timber frame home, the expansive interiors, walls of windows and vaulted ceilings with massive exposed beams evoke a sense of awe.

“When you stand inside of one, it’s a feeling that’s hard to describe,” says David Watters, who owns a timber frame home and is a partner of The Beamery in Zionsville, which has built hundreds of the structures around the Midwest. “Timber frame homes are very comforting. You just want to sit down, relax and have a fire."

Unlike log homes, timber frame homes have a wooden frame, not walls made of logs. This allows for the interior and exteriors to be finished like other conventional homes. The exteriors of timber frame homes can be finished using products from brick to aluminum siding. However, the most commonly used are natural stone or painted wood siding or shingles.

David Marquart, owner of Custom Woodcraft Builders in Indianapolis, says the discrete nature of a timber frame is helping it become more mainstream in Central Indiana. “Since the wood is only exposed on the interior, you can have one in any neighborhood without anyone realizing it,” he says. 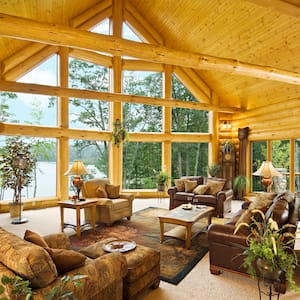 Want to Build a Log Cabin in Indiana? Find Out How Much It Costs

Owning a log cabin in Indiana requires regular maintenance that may go beyond what the typical, modern home needs.

Keeping with traditional building methods, and likened to an Amish barn raising, the building process begins with the erection of a timber frame.

“What we do is very similar to the ways of the past, except we do it with cranes now and have other technical advancements,” Watters says.

He first encountered timber frame construction at age 8 when his mother gave him books about barns. Now at 46, Watters is even more passionate about timber frames.

“It’s in my blood,” he says. “Ever since I was a little boy, I loved looking at the barns while my family was driving through New England. The craftsmanship of a timber frame really speaks to me.”

The frames for the home are made off-site and usually of red or white oak, white pine or Douglas fir. The framing is made using mortise and tenon joinery to fasten the timbers together, and then the connections are secured using wooden pegs. After the frame — or skeleton — is put up, it’s most often enclosed in an envelope of thermally efficient Structured Insulated Panels, which are called SIPs.

The insulation of choice for timber frame homes is known as Structured Insulated Panels. The panels are made by sandwiching two pieces of wood around a polystyrene or polyurethane core. SIPs typically cost 10 percent more than traditional framing and insulation, but they’re praised for being 30 to 50 percent more efficient than other products. That translates to a savings of about $80 to $120 per month in energy bills. Another environmental perk is the materials. Most of the SIPs are constructed with sustainable, fast-growing trees and there’s less waste during the manufacturing process. “Anything that’s leftover gets put into making the next panel,” says Pat Egan, owner of Thermocore Panel Systems in Mooresville, Indiana.

Once the house is insulated, Watters says the design options are limitless. “You can be simple and utilitarian or detailed and complex with your design,” he says. “The inside of your home can look like an Indiana barn or even a European cathedral.”

The design process begins with finding out the homeowner’s needs and wants to ensure the home is custom-tailored to their tastes. “That’s the beauty of them,” says John Hayes, owner of Fossil Creek Timber Frames in Spencer. “Every timber frame reflects the personality of the people living in them.”

Marquart worked with Watters on Joel and Kelly Franks’ 5,000-square-foot timber frame home in Martinsville. The Franks, who are Angie’s List members, were looking for a home that was open, yet comfortable to build on their 6-acre lot.

After seeing how unique timber frame homes were in magazines, they decided to meet with Watters to view a home he was finishing in Anderson. They were left with a lasting impression they just couldn’t shake.

“As soon as we walked in we said, ‘This is it.’ There was no question,” Joel says.

It took a year to build their $600,000 three-bedroom home, with a large chef-worthy kitchen for Joel, an avid cook. Off the kitchen, the dining area has a set of stairs that lead up to the 1,000-square-foot loft that overlooks the dining and great room. The 1,950-square-foot walk-out basement houses two bedrooms, two baths and an entertainment room with a wet bar.

“Our home is the place we come to decompress,” Joel says. “It’s absolutely gorgeous.”

Due to the skill and craftsmanship needed to construct a timber frame, you can expect to pay 20 to 35 percent more than a conventionally built home. However, Watters says that doesn’t faze his clients. “People want timber frames because it’s a passion of theirs and many plan on retiring there,” he says. “It’s not cheaper, but they last forever.”

Jeremy Bonin, architect and author of “Timber Frames: Designing Your Custom Home,” says timber frames definitely stand the test of time and there are still examples in Asia that are almost 1,000 years old.

Dan and Sharyn Antico plan on passing their 2,300-square-foot timber frame on to their three children. The retired couple moved from a lakeside home in Sparta, New Jersey, into their $415,000 custom home on Heritage Lake in Coatesville, Indiana, in 2006.

“We had researched log homes,” Dan says. “But they were too rustic for my wife.”

Check out the Angie's List guides to Homebuilders and Finding a Contractor for helpful tips.

The Anticos settled on a three-bedroom timber frame with a 25-foot-tall fireplace and haven’t regretted their choice for a single moment. They say their home appeals to everyone who sees it.

“Our friends sit in our living room and stare at the ceiling and say, ‘I just love it,’” Dan says.

Watters and Hayes say it’s this type of chatter that will continue to boost the popularity of timber frames.

“People are looking at their home as their refuge and a timber frame gives them that sense of security,” Watters says.

Hayes has already built more than 250 homes in Indiana and expects this year will be his best to-date.

“A well-designed home trumps anything else,” Hayes says. “When the wind is howling outside and you’re sitting in your great room, surrounded by tremendous timbers, you feel at ease because you can see what’s protecting you.” 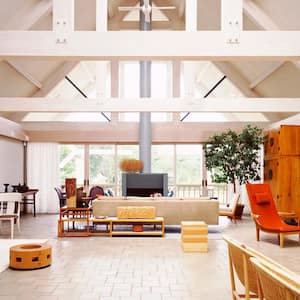 How Much Does It Cost to Build a Timber Frame Home?