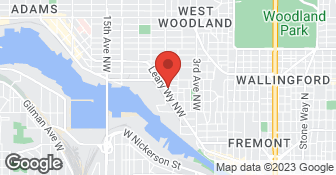 Ballard Animal Hospital dedicates itself to you, our clients, and your animal companions by providing up-to-date, comprehensive, professional care as honestly and compassionately as we can. We are committed to client education, individualized preventative health care and the diagnosis and treatment of disease. It is our primary goal that you and your companion animals feel cared for, and we will work diligently to ensure that you do....

The appointment was made for 4:30 pm on Friday. The office is located in a congested part of Ballard (very close to Fred Meyers). I rushed home from work, picked up my cats, got stuck in northbound traffic on Elliott Road, and then got stuck on a raised bridge. I received a phone call at 4:49 pm (I couldn't get to my phone quickly enough as I was driving). The message informed me that I was 20 minutes beyond the scheduled appointment time and would have to reschedule. At that point, I was in front of their office. I called and reached their receptionist, Jessica. I informed her of my location and she said, and quot;I don't see youand quot;. I then clarified that I was on Leary road waiting for traffic to pass so I could turn into the parking lot and at that point pulled my car into view so that she believed me. Nonetheless, she said that I would have to reschedule. I said it must be because their office closed at 5 pm and she told me that in fact they close at 6 pm. I looked at my two cats who were panting in their cages (it was a hot afternoon) and I told Jessica that I didn't think the Ballard Animal Hospital and I would be a good match and would not need to reschedule an appointment. I operate my own business as a healthcare practitioner. I file for taxes under the heading of 'service industry'. My goal is to make life easier for my customer. I also understand boundaries and certainly enforce 'no-show' fines and will reschedule customers if they are repeatedly late. However, it's seldom that the customer who visits my office for the first time manages to master directions, traffic, and parking. In addition, my office doesn't have to contend with the vagaries of the Ballard Bridge or Elliott Road traffic either. I can't imagine that I am the only customer to encounter these problems when going to the Ballard Animal Hospital. I cannot comment on the quality of the care of the clinic as I never made it across the threshold. It's not fair for me to read more into this event as it has a number of possible explanations. It could simply be that it was Friday evening and Jessica was relieved to know that she'd be leaving on time now that she'd canceled the 4:30 time slot. It could indicate an office run by an office manager that is over-controlling - creating a policy that is enforced without exception. Who knows - Jessica may have been terminated if she'd made an exception and slipped me in. I suppose I could have stormed into the clinic and demanded to talk to their office manager but I'm not a paid consultant. As anyone visiting this site can see, there are a number of worthy veternarians available in the nearby vicinity. I have chosen to take the extra effort to find the business that appears to emphasize serving the customer.

Description of Work
I scheduled an initial visit for my two 6 year-old cats. I was transferring care from another clinic. The purpose of the appointment was for the Ballard Clinic to meet the two cats and administer a scheduled vaccine.

the time there went very well. i left feeling i had found the right place for sinbad.

Description of Work
they checked his ears and they were badly infected. she also generally checked him out and got to know him, which i wanted. they were all very nice to me and my kitty sinbad, and the vet was great with him. the drops i took home for his ears fixed him up; they called me a week later to check on sinbad which i loved. not the cheapest, but not the most expensive. it's a well-run, professional vet office.

I have been going to Ballard Animal Hospital for over a decade and trust them completely- I have dogs and cats and can highly recommend Dr. Rouse

Description of Work
My greyhound tore his nail off (very bloody) and the vet and everyone at the clinic did excellent wound care and follow ups until he was better.

They were terrific. The price was reasonable and there was nothing out of line and we didn't expect. The quality of the personnel is really great. Their responsiveness was spot on.

Description of Work
I took my pet to Ballard Animal Hospital a couple of months ago to do some blood work and testing. They also did some diagnosis for a dislocated hip.

I moved to Ballard in the summer of 2006. Having a GREAT vet was mandatory. My friend Elizabeth recommended Ballard Animal Hospital. The first few times I went in I saw 'guest vets' (vets filling in for the day) and was not thrilled. But finally by luck I got Dr. Rowse and I knew I had found my vet for life. He is W O N D E R F U L; he is gentle, thorough and kind; he really cares and it shows. Over the last 4 years I have seen him dozens of times and always feel my many cats received the best care possible. Even though I have moved away from Ballard I still drive the extra miles to see Dr Rowse. As long as he is practicing I will continue to take my pets there.

Description of Work
Pinky (the cat) had rotten teeth. Dr. Rowse yanked them all out and sent her home happy and healthy. (He also did a complete exam and some blood work to be sure she was OK for surgery)

We started at the emergency animal clinic and after our cat had been stabilized we moved him to our regular vet, Ballard Animal Hospital. The team did everything they could to save the cat but in the end he healed physically but not neurologically and refused to eat even after his jaw had healed. He had to be euthanized which was sad but the team at Ballard Animal Hospital did as much as they could and were sympathetic and helpful throughout the event. We no longer live near that hospital but I would recommend them to anyone living in the Ballard/Fremont area.

Description of Work
Our cat was hit by a car and suffered extensive injuries. The team at Ballard Animal Hospital wired the broken jaw shut, fixed the broken leg and set up a feeding tube so we could get nourishment in.

We ve gone to Ballard Animal Hospital for 2 years. We really feel they do a fantastic job. They are very friendly and Dr. Rowse is fabulous and the others are great as well. You have to wait sometimes, but I don t mind because I really respect how they help people out who don t have that much money.

Description of Work
My dog went in for his yearly check up. No shots were administered.

All statements concerning insurance, licenses, and bonds are informational only, and are self-reported. Since insurance, licenses and bonds can expire and can be cancelled, homeowners should always check such information for themselves.To find more licensing information for your state, visit our Find Licensing Requirements page.
General Information
Free Estimates
Yes
Eco-Friendly Accreditations
Yes
Payment Options
Check, Visa, MasterCard
Senior Discount
No
Warranties
Satisfaction

We see canines and felines only.

Ballard Animal Hospital is currently rated 4.8 overall out of 5.

No, Ballard Animal Hospital does not offer a senior discount.

No, Ballard Animal Hospital does not offer warranties.

Are there any services Ballard Animal Hospital does not offer?

We see canines and felines only.