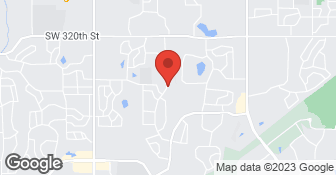 We will beat any competitors price, as long as it makes sense to do so. We are experienced, and affordable. Green Leaf Tree Service is licensed. We have a tree removal specialty bond, and we carry $2,000,000 of liability insurance. You can checkout our work on our website, or on Facebook by searching Green Leaf Tree Service. Our company is based out of Federal way but we service the greater Puget Sound Area. Thank you for considering us. Don't use a landscaping company to do your tree service work. You are putting yourself at risk if you use a company that is not insured to work up to 250ft in the air....

Oh my gosh, Green Leaf Tree Services are AMAZING!!! Erik and Team were the BEST. Erik was quick to respond to my request for a quote and was able to come and do the job of trimming trees and shrubs at our condo building within a week. I highly recommend this company, and would definitely hire them again. Thank you so much!

The Green Leaf crew did an excellent job completing this project. The price for the work was reasonable, & they were shockingly fast at cutting down the large laurel hedges that span one side of my property. Furthermore, they thoroughly cleaned up & took away what they trimmed. Dustin was clear at communicating his crew's plans, what to expect regarding how the hedges would look post cut, & their growth after. These laurels are finally at a height that I can manage on my own. Thank you!

Quick response, great value, will use them in the future.

I had several large spruce, cottonwood, and pine trees that needed to be removed, as well as, other trees that needed to be topped and trimmed. Dustin was able to come out the same day I called to give me an estimate, which was very reasonable. He is very friendly and knowledgeable and took the time to explain everything. They arrived on time and were safe and hard working. They left me with some firewood and cleaned/removed all of the brush, leaves, and cuttings. Dustin and his team from Green Leaf Tree Services did a great job! I will hire them again.

It was a big job but they were up to the task. Dustin did a terrific job of communication through the job.

We wanted some deadwood removed from a Big Leaf Maple. Green Leaf was the first to respond, theirs was the lowest of three bids, they took care of it within a couple of days, and they did a good job.

I'm not fond of reading 5-star reviews or a review giving an "A" rating in all categories. But this rating was most appropriate given the great job of tree removal/topping that Dustin and his team performed in our neighborhood. There were multiple homeowners involved in this effort, and more than a dozen good size evergreen trees involved (some removed, some topped). Communication was key to deal with the challenging parts of the task that arose, and working together with Dustin (through all types of weather conditions) the end result was nothing short of 5-star. --Russell

1. Scheduling issues: received a quote, sent a message saying we needed more time to get other quotes, and they showed up anyways. 2. When receiving the quote, we explained our main goal was to protect and remove branches by wires. Day of they asked multiple questions and said they couldn’t take down certain branches that were agreed upon earlier because of the placement by the electrical wire. Completely understand, but they still asked for the same amount of money with the job not fully complete. 3. They seemed rushed, took maybe 30 minutes for the job that cost us $400. And in the end, our concerns about branches remain.

[Member Name Removed] I am really surprised to see the low rating review. Eric came out and gave you an estimate to remove the branches that were tangled up in your 200 amp service they went to your house. We did exactly that. Working next to powerlines is very dangerous. Your power cable was rubbing on the stem of the tree. We successfully removed that for you. Had the jacket of the cable been compromised, I would have been electrocuted. While on the job, I heard Eric check with your husband and reaffirm that we were not touching any thing except what was rubbing on the lines. He responded by saying yeah that’s what we talked about. So I don’t understand why the bad rating. The reason I was asking questions when I got there is because I did not do the estimate. I was just there to do the work.
5.0

This is the 2nd time I have hired Dustin and his team to do tree trimming. Once again they did excellent work. They trimmed 2 maple trees in the front yard and a hemlock in the back yard. They got it done to my complete satisfaction and cleaned-up/removed all the brush.

Green Leaf Tree Service did a great job trimming our two large elm trees in just one day. They were here working within just a couple days of our request and did high quality work at reasonable rates. Dustin and his crew were very friendly and helpful, and they cleaned up the entire work area before they left. We would hire them again and recommend them to others.

The work was great as was the price. They were very efficient and did a great job with clean up. Will hire again when ready to do more trimming.

Dustin was prompt and professional and very skilled We needed 3 long limbs cut to open our view. The actual cuts took only 10 minutes..But Dustin had to work his way around and up a 100 year old maple which took some serious climbing skill.

Very good service. Professional, reasonable price, started and finished on time, cleaned up after. They have done work both at my business and at my home. Has cleared land, removed trees, and trimmed / limbed trees. Would definitely hire again.

the team of guys were prompt, friendly and advised me on what I should do to assure that the unmaintained trees on the property next door to me do not cost me if they should fall onto my property or house.

Excellent work by Justin and his crew! I've already provided his contact info to two others and plan on having him do some work at my place of business.

Description of Work
We had a 90' douglas fir tree removed.

Dustin was very responsive to my initial call. He provided an estimate and scheduled the job quickly. The trees were trimmed to my satisfaction and he cleaned everything up well. I thought he communicated well and it was obvious he enjoys his work. I will hire him again.

Description of Work
I needed trees trimmed in the backyard along my fence lines, including two large plum trees that were very overgrown.

Dustin and his team Nick & Kaleb showed up on a Saturday morning a couple of weeks ago and went to work expertly trimming several large shrubs and several 15' cedar trees in the front and back yard. They also took down 3 medium-size mountain ash trees. They did a great job of cleaning up and removing all of the brush, leaves, and cuttings. I would definitely recommend them to anyone needing shrub or tree trimming/removal, from small to large to huge.

Dustin was accommodating with fitting our smaller project in to his busy schedule although-he had larger jobs. We appreciate his time and attention to our project.

Description of Work
Our maplewood tree in the front yard needed to be removed and the stump needed to be ground up. Greenleaf tree service Dustin specifically cut down the tree while we were gone at work. Upon our return home the tree was removed and all debris was taken away. A week and a half later Dustin returned to grind the stump. He provided excellent work and also provided information on what we could do to make the ground tree stump turn into compost and turn into dirt. He was professional and timely and we appreciate the service that he provided.

Dustin and his crew were great. They showed up on time and did a great job removing our monster pine tree. They we careful to work around our garage and finished landscape. I'd definitely hire them again.

Dustin, and team arrived as scheduled at 0845 and began work soon after getting there equipment staged. These guys are the hardest working dudes I've ever seen, Dustin the owner and three others went to work on our trees that were located between the house next door and ours with know room for error due to the tight space between houses. They limbed the trees then "chunked down" the trunks and were done by 1415 without a single bit of damage. Very happy with their work and will hire them again..