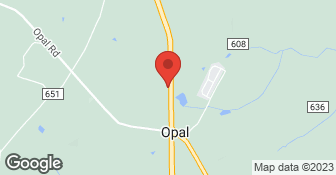 ASAP Paving came out in March of last year. It was $3500. It was outstanding. Their communication, professionalism, punctuality it's all very good.

Description of Work
ASAP Paving did an asphalt driveway for me.

The previous owner of ASAP, Wayne Houston, came to view the slab in August 2011 and said that there was nothing wrong with the work. Houston is no longer affiliated with ASAP according to several of the employees there. We tried to work with the salesperson, Josh, who attempted to arrange a partial fix for the problem. The fix turned out to be painting the concrete, not repairing it. We have attempted to contact the current owner, Vicki Houston, by phone and email on several occasions. She has never called us back or returned our e-mails. We have now found out that Josh has left the company. In addition, the ASAP web site is misleading and/or outdated. It claims that the company is a member of the Better Business Bureau (showing an incorrect BBB logo) and that Wayne Houston is still the owner/president. I contacted the BBB in Richmond VA and they confirmed that ASAP Paving is not a member. I doubt that we will ever get the inferior slab fixed by ASAP at this point. I want to make sure that other consumers are aware that the company provides an inferior product and does not honor their warranty.

Description of Work
ASAP Paving installed an inferior concrete slab in our carport in June 2011. The slab is two colors and cracked. Water pools on the slab and flows toward our house when it rains. The ASAP warranty means nothing.

All in all, they did a fantastic job. I would highly recommend them to others.

Description of Work
They repaired and resurfaced a relatively long driveway.

Description of Work
The work consisted of paving a long, straight driveway (about 8' wide and 160' in length) from the street, along the length of the side of the house and then open up to a wider extension in the backyard where kids could play, we could park another car, etc. The extension in back was an additional charge ($1600) as it was not part of the contract with the GC. The price for the extension seemed a little steep for an area that size (approx 20' in length x 16' at the widest part.) I happily paid it because I didn't want to hire a different company and run the risk of unsightly seams in the asphalt where the two pieces of asphalt met. I was told that ASAP Paving would put down 4-6" of stone as a base layer and then put several inches of asphalt on top of it. It would be rolled and it would appear seamless and smooth. This appeared to me as a fairly simple, straight forward paving job. And it was.

I am satisfied with the services provided. I would use them again.

Description of Work
They paved our driveway.

They came out with everything they needed and had our new driveway installed in 2 hours. They were wonderful! I've never seen any organization work that fast! I highly recommend them.

Description of Work
They replaced our driveway with asphalt.

They were little expensive and they seemed like they had a lot of marketing type of things like a jazzy van but they were not worth it. The guy who came out was very knowledgeable.

Description of Work
ASAP Paving came out to give me an estimate in March to put in a new driveway.

The day of installation was great! The paving job looked superb! However - They made a promise to us that there would be no "puddling" with their paving job. Immediately after the paving, we noticed puddling and called them to take a look. They said not to worry, it would "fix itself" so to speak in time. As the warranty was only for a year, we waited 11 months to complain again about the puddling. It still puddled. They then said a recoating would "fill in the depressions". They took forever to get back to us. When they did they said it was normal and not deep enough to worry about! Sometime after that wonderful experience, my driveway developed a "sink hole" of about a yard by a yard at the entrance of my garage. They again delayed with a response, refusing to talk to me or respond to emails. After a long period of time and a stalemate about what caused the sinkhole (they saw 1 chipmunk & said they would not repair the hole because there was probably a big den under the sinkhole that caused the problem. Sidenote - chipmunks do not nest in groups, 1 chipmunk per hole. A pesticides expert indicated there was no way a chipmunk could cause such a sinkhole due to the size of their teeth. ASAP quoted an outrageous price to repave the sinkhole and I refused. I said if they would provide core samples throughout the driveway that showed their paving was up to their specifications, I would pay their price, otherwise they would repave my damaged driveway (6 x 12 foot section with new paving). They refused my offer. After continuing to call their very freindly receptionist, with no return calls about the solution, they finally said they would perform a "cold patch" to fill the sinkhole. This patch was done and with the first cold frost, the patch (maybe 2 feet by 3 feet) developed cracks. The person applying the patch didn't even have the correct trowel to put the material in the ground and level it. With this revelation of poor quality, I gave up with contacting the non-responsive ASAP representatives. I would not recommend this company for a number of reasons. Over promise and under deliver. No call backs, no communication. Warranty is obviously meaningless. Bottom line, not a very good company to do business with.

Description of Work
Gave us a good price for two cul-de-sacs in our neighborhood (8 driiveways and two pipestems + 2 individual driveways priced at another time.

Excellent. I give them a 5 star. Professional all around. From sales through the workmanship. One of the few honest paving companies.

Description of Work
Absolutely BEST of half a dozen paving companies I engaged during bidding / proposal process. A++ on timely responsiveness, professional looking proposal, back office support, elaborate detail of material, and sales. All around ASAP Paving does a great job. I have a 500 ft. gravel driveway in Great Falls, VA. I had ASAP Paving asphalt about 2,000 sq. ft. in front of my garage. I also had them regrade and roll 4,250 sq. ft. of gravel driveway with 2" of 21A crusher (blue dust stone). The project manager (JM) showed up on Monday to prep the driveway, and the following day the job was complete within 2-3 hours. ASAP sales person (Jeff) was extremely helpful recommending some water drainage solutions for my driveway, which faces a steep embankment. JM also had a great suggestion for putting a 6" high border to keep the mulch rolling back onto my driveway from the embankment. A month has gone by now and everything looks perfect. "Stay clear of JM in the Bob Cat skid steer." The day I called ASAP Paving, I was ready to go with one of the "flashier" paving companies. I am reluctant to mention any names. Just be careful of dealing with companies who are more focused on their flashy truck and paint jobs. But, between the lacking proposal detail, fluctuating pricing, and pushy attitude, I canceled my first choice and went with ASAP Paving. Not only was ASAP Paving more responsive and professional, but the job came $1,800 cheaper. Although, I was not one their calendar, ASAP Paving will a clear effort to pickup where the other company fell short. My job was completed on time (while my household was out on spring break). Note of caution when dealing with paving companies: 1. Measure your driveway yourself. This serves two purposes. First, you know how much square footage you will be bidding. You need the length, width, and depth of proposed surface area. A new residential asphalt driveway requires 2.5" of asphalt. They actually pore about 3" and then when they roll it you end up with 2.5". I already had a blue stone gravel base. The second reason you want to measure your driveway project is, so you can attach it to the proposal. It will help you calculate square footage of material. Go to any of the stone or asphalt websites to calculate the number of tons of material (stone) required. I used Luck Stone's calculator. This serves to keep your paving company honest. 2. Ask for detail material tonage and type of your proposal. 3. During the day of paving, ask the project manager you would like to see the invoice for the material. So, if your proposal state 50 tons of 21A compactable stone, you should see an invoice from a quarry for that amount. In short, make sure you get what you paid for. Based on my experience, only a couple of paving companies were willing to quote me specific material type and tonage. 4. Make sure to get a detail proposal. Thanks Jeff, Jeniffer, Robin, JM.

When calling around to get quotes, I found that Asap Paving was not the cheapest but they were not the most expensive either. They were very professional and they did a good quality job. The drive looks great. I would call them again for my paving needs.

Description of Work
They paved our driveway and turn-around. The job was completed in 4 to 5 hours.

Concrete installation and repair is a specialized service that can save you a lot of money and time if done properly. If you have existing concrete structures, you will want to protect and preserve them to make them last as long as possible. In addition, if you have a project in mind, wether it's a new driveway, walkway, parking lot, curbing, or any other concrete or asphalt service, we can help. With over 30 years of high quality experience, you can call today for the area's best!  …

Concrete company with over 25 years of experience. We specialize in a variety of stamped or brushed concrete jobs such as driveways, sidewalks, garages, patios etc.  …

Romeros Concrete LLC can take on any of your concrete needs. We're owner operated and dedicated to our service with many years of experience. Please check out our photos and give us a call with questions. We offer free estimates and look forward to hearing from you soon.  …

Insured
All statements concerning insurance, licenses, and bonds are informational only, and are self-reported. Since insurance, licenses and bonds can expire and can be cancelled, homeowners should always check such information for themselves.To find more licensing information for your state, visit our Find Licensing Requirements page.
General Information
Free Estimates
Yes
Eco-Friendly Accreditations
No
Payment Options
Check, Visa, MasterCard, Financing Available
Senior Discount
No
Warranties
Yes

How is ASAP Paving overall rated?

ASAP Paving is currently rated 3.7 overall out of 5.

What days are ASAP Paving open?

No, ASAP Paving does not offer eco-friendly accreditations.

No, ASAP Paving does not offer a senior discount.

Are warranties offered by ASAP Paving?

What services does ASAP Paving offer?