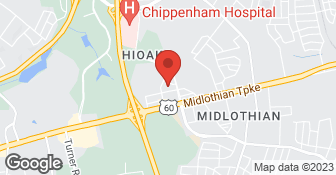 TruGreen® provides a full suite of tailored lawn and landscape services. From fertilization and aeration to tree & shrub services and much more, TruGreen delivers superior results backed by our Healthy Lawn Guarantee.®1 We also offer effective solutions to help control and prevent lawn damaging insects, like chinch bugs and grubs. Our passion for lawns sets us apart, and we’ll help you achieve a lawn you love. Contact us today to start your tailored lawn plan....

Marshall’s Lawn & Landscape Inc is a full service lawn and landscaping company. We offer many services from fertilizer applications, yearly maintenance programs , mulching and much more. Give us a call or visit our website to schedule a quote .804-314-8924 Welcome to Marshall's Lawn & Landscape Inc., where service is ALWAYS in season. Whether you want to spruce up your yard for that upcoming gathering or create a professional, manicured look for your office building, we are your last and permanent solution. Marshall's Lawn & Landscape Inc., is a family owned and operated business located in Mechanicsville, VA. Since 2006, we have been providing full service landscape services throughout the surrounding areas, happily and efficiently. We offer year round maintenance contracts to ensure your property is looking its best all the time. Call and ask about our current discounted rates! Our company is based on the belief that our customers' needs are of most importance. Our entire team is committed to meeting those needs. We would welcome the opportunity to earn your trust and deliver you the best service in the industry.  …

got a thing in the mail that guaranteed a good lawn by 90 days. Called and they came out, I was not home, they didn't come at the agreed upon a time. But did leave a note saying they would not do my lawn because it was in too bad of shape. (lol) ..which would have been fine for the guarantee part of it but not to discuss alternatives, or a follow up, is just bad for business.

Description of Work
lawn fertilized and free of weeds

They promised to make my yard beautiful. In fact it's gotten worse since they started doing my yard. They keep taking money out of my account but there's no difference. My crab grass was the first thing that was supposed to go. but it's getting worse. I do not recommend.

Description of Work
They're supposed to make my yard beautiful.

The treatment did not work. They tried to charge me and not do anything. I paid 52 per service but nothing not getting done. I had my daughter call them and asked for a refund. My yard looks horrible. They put the money back.

I have used TruGreen Lawn services for over three years. Overall, my yard looks better than neighbors who do not pay for a yard service. However, they have not been able to control weeds and this past year, I continually see grubs on the lawn (after paying for weed/insect control). TruGreen just completed the annual aeration/seed service (31 October 2017). They sent a two-person team to provide the service. At the onset of the service (after getting out of the truck), the head team member, "Harry" said that "he had to drive from Richmond, and he was not happy." I then showed him my surveyor sticks, to identify my property lines as to where he should aerate (my yard is much bigger than my adjoining neighbor properties). He used the large aeration machine and went over my yard in about 5 minutes. Noting that he had not aerated up to my property lines as asked. I then asked him to aerate heavily the one side of my front yard that has a lot of "wire grass". I explained that the other TruGreen associates always go over this area several times to help grow back grass over the weeds. He said that "all I need to do was spray round-up in that area" (my front yard). Each time I asked him to aerate places he had not completed, his voice accelerated, and his demeanor became more hostile. When I asked him to use the small aerator to plug the soil around the edges of the driveway, and the high/awkward sloped areas; he angrily took the small aerator off the truck, and deliberately took out large areas of soil (not plugs) to show his displeasure with my requests. At this point, I did not ask him to complete my service. His associate, that accompanied him was very nice, and was putting down the seed, using the seeder. I complained the same day to TruGreen customer service (no reaction, no customer service intervention). I also complained in a recent customer survey (and again, nothing was done about this incomplete and unpleasant service). I paid the $164 aeration and seeding service that was not completed to my satisfaction. There has not been a lot of other lawn services who provide service to the Locust Grove area (competition). I hope I can find another service in the spring so as not to use TruGreen in the future.

They did good. A year before I had them do the whole lawn and it was about $800-900 for the whole year. I went away from it and started doing it myself, buying the fertilizer and saved about $400. They treat it more often but the results were there, they were good results. But so far this year is my experiment, I'm doing it myself and the results seem about the same. I will not probably use them for that, unless you don't want to do it. It's one of those things do you actually want to go out there and throw or spread fertilizer. If you pay someone to do it, you'll pay more more but they do a good job. They always show up on time. They are always good guys that come out, very professional. I will continue to use them for the shrubs, they need something. They look good, whatever they put on there works.

I like their plans, they were able to get rid of our weeds. I felt like they could have done a better job about putting fresh seed down to grow better grass. I feel like that's where they were lacking. The workers were good.

Description of Work
They performed fertilizing and weed control.

.Its going along well. I had signed up for a years service, so they had repeated the application. I have forgotten how many treatments but I had paid for a year service. Certainly the lawn is green, but they explained to me that I should expect a major change over the course of a full year with the treatment. I give them a B and tha's only because they did explain its a years treatment, and then after that year. so the second year, so next spring, then I should see the type of green lawn that i have envisioned. I am going to withhold the grade on quality until they finish the treatments. They seem to be very responsive.

Description of Work
.What they do is, they did a weed treatment, I dont know if its weed and lawn application each treatment, but I think I have had 2 applications.

They were prompt, they did what they said they were going to do. They gave me a detailed thing of the weeds and how they would tackle treating them. They were very knowledgeable. The workers were excellent.

Hired TruGreen to do chemical treatment on trees in my yard. When I called to book the service, I was given another number to call to schedule the service. The first person took my credit card information without a problem but then the scheduling person said she couldn't give me an actual date of service as it was based on availability. I requested a certain date (for a week later) and she said that she would try, and call me back if that date was not available. If the date was available, then a technician would call me to confirm the time of service. I never got a call back from the scheduling department and so called to check the date. I was told, it was fine. I then never got a call from any technician as to the time of day he would be at my house. As this was his first visit and I have pets, I needed to be at home to wait for him (not to mention take the day off work!). After 3 calls throughout the day to customer service, the technincian never called, and actually never showed up!! On my 3rd call to the company, I asked to speak to a manager and was told that someone would call me back. A manager still has not called me back 2 days later!!!! Needless to say I cancelled my service with TruGreen and will never do business with them again. They lost my trust and were not helpful in solving the problem!

Yard service is horrible for TruGreen. We tried them twice and both times they screwed up. They don't show up when they say they're going to show up and when they do show up, they put the wrong treatment down. The yard ended up getting worse without any treatment. They didn't put the tree immersion down last year. We had tree service with them originally and we're really impressed with the tree service that they do, shrubs and stuff. So, he was going off of that reputation, but apparently it's two separate entities I think. I guess it's just two different departments that does the work on a scheduling. It's just that the chemical treatment portion of it was not great. If they offer free treatment, we wouldn't take it. What they gave us and price does not compare. Even if it was like free month of whatever, it still wouldn't have been worth it because that month or whatever just screwed up the lawn even more, ended up costing us more to fix.

Description of Work
We ended up going with TruGreen for tree service.