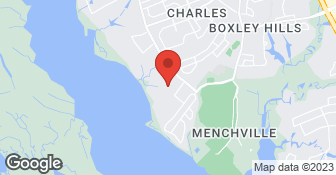 We are a specialty service company based out of Newport News, VA and serve the Peninsula and Southside areas. Our company provides a wide range of services from multi-level chimney inspections and cleanings to complete chimney rebuilds as well as other home services. We provide our clients with industry leading products and services at the most affordable prices in Hampton Roads. Serving Hampton Roads over the last 16 years has given us the knowledge and understanding of various chimney systems and issues that are prominent throughout our region. Whatever your chimney or home needs may be Ace Chimney Sweep is there for you. Our services include: • Multi-Level Chimney Inspections • Chimney Cleaning • Chimney Caps and Repairs • Dryer Vent Cleaning and Repairs • Masonry Repair • Pressure Washing • Window Washing • Roof Washing • Waterproofing For additional information about the services we provide and testimonials about our company, please visit our website at www.acechimneyva.com. If you would like to schedule an appointment or discuss a certain project, please feel free to contact us. Thank you for your time and we look forward to the opportunity to work with you. Additional service area: Suffolk & Virginia Beach

Exterior Wash Before & After

Highly recommend. This is the second time using this firm and both times have been great.

Tech was very polite & pleasant. He was very knowledgeable andv informative about my particular problem and gave me options in how to correct.

Ryan came out right on time. He is so friendly and competent. He fully inspected our very high chimney and came back with some excellent suggestions for how we could save our fireplace and continue to use it with wood or gas, in addition to fixing our leaking chimney. He had a bid to us very soon. We signed and he ordered the specialize cap. As soon as it came in, he scheduled our installation. It just happened to fall on the hottest day of the year. Our old chimney cap had been sealed and resealed many times, so it was hard to get off, but Ryan persevered with a cheerful attitude. Soon it was off and our beautiful new cap was installed. Then he finished repairing and resurfacing our fireplace. The work was immaculately done. When it was over, he informed me that he had reduce our bill below what he bid it because he did not have to spend as much time on our firebox as he had thought. When does this ever happen? What a guy. This is the best experience I have ever had with a contractor (and I am 62 and have owned about a dozen homes).

Description of Work
I needed a new chimney cap for a huge chimney 3 stories high and right on the beach, which means high winds

It went very well. He was prompt, efficient, knowledgeable, courteous, and careful with my home and furnishings. I have good peace of mind knowing that this potentially hazardous part of our home is in good shape.

Description of Work
We recently bought this house with an existing washer and dryer. I needed the dryer vent inspected and cleaned and the tube from the dryer to the outside replaced.

Crew was very courteous, punctual, and professional. Chimney was swept, fireplace was cleaned, cracks were sealed, and a smoke guard was installed. We have used Ace Chimney Sweep in the past and once again they did an awesome job. I highly recommend them.

Description of Work
Smoke seeped into house from firebox when a fire was burning.

I called twice and left messages stating that I would like to make an appointment to have fireplace and chimney cleaned and possibly dryer duct cleaned. I did not receive a call back. I also left several text messages as the website gives the option to do so. I received one response stating they would call me the next day to make an appointment. Never heard from them. This is totally unprofessional. If a business is too busy to respond then they are not dependable or reliable!

Ryan came out and cleaned my dryer vent, the vent runs through the attic of my two story home. He also provided a quote to reroute the dryer vent to make it more efficient. He was professional and I will hire him again.

Person called and left a voice message re work...I called back and left a message and person has yet to return my call.

Excellent. Workmanship on outside of chimney great!

Description of Work
They never showed never called. I left messages and waited for two hours.

Work was done quickly and thoroughly and everything was cleaned up and the dryer set back in position. The crew ensured the duct work was properly attached to the dryer outlet. Work was done within a few days of setting up the appointment.

Fantastic - they did a great job on both projects, very reasonable pricing.

Description of Work
Ace performed a routine chimney cleaning and I also had them return to do some mortar repair on the exterior of the chimney.

They did a great job and I am going to use them again this year. They didn't mess up the house at all. I was surprised at how clean they kept everything. My husband and I were very impressed.

Description of Work
They cleaned they chimney and the insert.

Excellent. Was running just a few minutes behind schedule but, as promised, called when they were about 20 minutes out and we both arrived at the same time so no time wasted. Was very pleasant but more important, was very, very professional. Would hire again in a minute.

Description of Work
Dryer vent cleaning and outside chimney repair

They came out twice to fix leak in chimney. Very personable. Work they did looked nice but did not fix problem. Since then, I have called 4 times and left messages but have had no call back from the company. Very disappointed.

Description of Work
Needed to have our Gas-log fireplace and chimney cleaned/swept.

As billed. Professional and efficient. Would hire again. No issues noted.

Awful. To this day still have not received report of work needed. I have paid for inspection services and received NO report at all - let alone reports prior to tenant moving in. Was also told that cost of inspection could be applied to the repairs. Have called back multiple times. One time (two days after the inspection) I was able to speak to someone who said they were out and would call back shortly and give me a report - NOTHING. I have left multiple phone calls asking for a refund - not so much as a call back - NOTHING. I have paid for services and received NOTHING. Now I am going to file a report with the Better Business Bureau and write as many negative reviews wherever I can. STAY AWAY from this company!!!

Description of Work
Inspection of chimney and outside chimney door. Needed repairs completed before tenants moved in. Appointment was scheduled so work could be completed before tenants moved in. Was told would receive report of work needed, costs, and work could be completed prior to tenant move in. Was told they do not accept credit card so I had to pay with a check. Do NOT fall for this. I did and will never fall for this again.

They were very thorough and explained everything. I was very happy with their recommendations and prices.

First, they were about 45 minutes late. Then, Ryan gave me the price which was reasonable. I have a double chimney. He gave me a price for 2 chimney caps. He said he measured and it would be fine. I told him I was going to have to leave before the job was finished and he said he would email me with pictures once he finished. I waited for the pictures and never received them. I called to ask about the pictures, left messages and he never returned my call. The single chimney caps, though apparently functional are not visually appealing at all. They overlap and look askew. I was not pleased at all. He should have recommended a double chimney cap. Apparently he was more concerned with doing the job with the materials that he had on the truck than doing the job where the customer would be pleased. I attempted to contact him several times afterwards with no response. When I had my husband contact him, he did answer the phone but when my husband started telling him about the problem, he said that he didn't exactly remember the job and would have to go back to look at his records and he would call him back. He never received a return phone call. Not satisfied with the work and poor customer service!

Ryan was on time for the appointment, professional yet friendly, and thorough in his work. The charges were very reasonable for the work done,and we will definitely call him again (hopefully only for chimney cleaning :-).

Description of Work
The wire used to close our roof mount damper had broken and we wanted it repaired. Another company encouraged us to replace the entire thing, and then went on to give us some very expensive recommendations for other chimney related work. Ryan (and assistant) came in and repaired the damper very reasonably, assuring us that it was good to last for a long time. They also installed a cap over an unused chimney , applied Crown Coat to repair the crown on both chimneys, and cleaned the chimney.

Nebula painting and power-washing is a fully corona vaccinated business. We have a professional team for all of your interior and exterior painting needs for your home or business. Offering reasonably priced paint colors and paint matching. Nebula also has a great team to power-wash your home or business, garage, driveway, sidewalk, boat, porch or deck. As a privately owned family business we take pride in our work. We have over 15 years experience in the field. Coming from a background of residential and commercial properties including government properties. We enjoy what we do and it shows in our work. We hope to hear from you for your free estimate.  …

Established in December of 2020, we specialize in various types of extetior cleanings for both residential and commercial projects. There's no job too big or too small we won't do. Estimates are always at no charge, and are custom built to meet the need. Call us today, we aim to please. "Bada Boom, Bada Bing! look, it's clean! Forget about it!" The Boss  …

Ace Chimney Sweep is currently rated 4.8 overall out of 5.

No, Ace Chimney Sweep does not offer free project estimates.

No, Ace Chimney Sweep does not offer a senior discount.

Are there any services Ace Chimney Sweep does not offer?