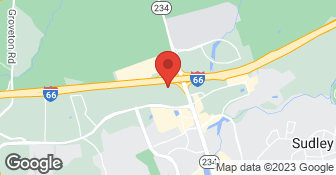 MEP Home Services is a independently operated and family owned business. Offering HVAC, Electrical, and Plumbing for your home or Business. We offer repair or replacement options for your HVAC system, Water Heater, and Electrical Panels. We will come in behind another contractor and give you a free second opinion on your HVAC system or Water Heater....

50% off - Furnace or Air-Conditioner Tune-Up…

Ron (technician) came out and installed a softener for me that he provided, went really well and price was fair. They have me on an annual schedule for service which I won't have to remind myself to do it next year. Would definitely hire this Company again

DO NOT USE THIS COMPANY!!! This company was sent to my home through my warranty company and I had nothing but problems and lied to on multiple phone calls. After being told they never received an “authorization” to do the work...which the warranty company did send on a specified date, I was told by Tina, I needed to call Authorizations and get them to send it. Unfortunately, anyone can’t just call. That’s “Tinas” job! But, I got it done after numerous calls and being on the phone for hours. Also, after being told this was a common part and they more than likely had it in stock...Nope! Now the part needs to be ordered and took almost 6 weeks to get here...which I never would have known the part arrived unless I had of called. After calling, I was told, we’ve had the part for 2 weeks but the numbers we have are not in service. A lie! The 2 numbers on file were in working service and I was on one of those lines! So I asked for the soonest available appointment because I have now been without a working hvac unit for over 2 months. “Tina” whom I spoke with again informed me the next available appointment was next Thursday between 8am-12pm. Which I accepted, blocked the morning off and wrote in my day planner. Waited around all morning, no call, no show! So a little after 12 I called to touch base....and now another lie!! “Tina” now claims she never said the appointment would be next Thur between 8am-12pm but 2 weeks later between 12pm-4pm. Major time and date discrepancy!! Not to mention, there was NO responsibility taken for any of these problems, lies or blatant disrespect for the situation at hand!! I asked multiple times to speak with another person in charge, an owner, supervisor or someone and I was told “No” by “Tina” once again! As I stated above DO NOT USE THIS COMPANY!!

Description of Work
Part on my HVAC unit went bad and needed replacing.

Very well. I have other work, and will be using MEP again.

Description of Work
Outside faucet replacement

Victoria went beyond the service with the installation.

Description of Work
I had an Aprilaire humidifyer installed.

[Member Name Removed], Thank you for your comments, I will make sure Victoria gets your feedback. Russ Tantillo Service Manager
5.0

Initially ran into an issue with my home's gates failing (it wasn't the companies fault) and then had to make a couple service calls because humidifier wasn't properly installed after the first couple visits. Overall the customer service was great, and techs were very responsive and explained the process very well. Would recommend for future work.

Ok. They came on time, briefed me on the phone on the work and how to deal with any problems that might come up.

Professional and very knowledgeable, will use again.

The first night the alarm they installed to notify us of a water leak went off and we discovered the water supply tube had broken. We turned if off and notified them in the morning. They apologized and sent out one of the same installers that afternoon. While the problem was with the manufacturers product MEP took full responsibility and immediately provided us with a new copper tube to replace the original plastic one. There has not been any other issues since then. We continue to enjoy having this product enhance our home. We highly recommend MEP to all!

Description of Work
They installed a new whole house humidifier for us. The entire process was all done well and professionally. The work done was excellent and they were very knowledgeable of the process. Friendly people who are dedicated to doing a good job!

Very well performed and the tecnician was extremely polite and very professional.

Great! She was very thorough and knowledgeable. Would definitely recommend to others!

Description of Work
Maintenance check up of furnace and heat pump

We provide service in your home for your air conditioning, heating, plumbing and electrical. We have a staff of over 60 professionals ready to help you with these 3 services. Whether at home or at your office, MEP Home Services can help you.