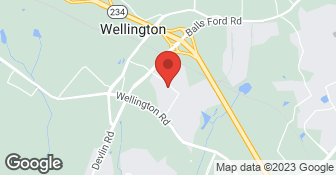 Able is a local business success story, celebrating over 25 years in business. A family owned & operated business, Able grew from one truck and a small office in 1987 to a leading regional moving services company with a fleet of modern trucks, state of the art storage facilities and local, national and worldwide service capabilities. Additional phones - (703) 978-6683, (703) 978-8616. Additional contact name - Joe Singleton....

They were good. They got there and they were quick, clean, polite, and I got the furniture safe.

We are so happy your move went well! Thank you for your business and taking the time to post a review here on Angi. We love to share our reviews with our crews. Do you happen to have your move job number?
5.0

ABLE was outstanding from start to finish. Sande handled my quote quickly and professionally, and was very enjoyable to work with. The same could be said about Anni, the move coordinator. And I can't say enough about how good the movers, Will and Christian, were. They moved multiple large and expensive pieces or furniture without so much as a scratch on the furniture or any part of either house. This was particularly impressive in the case of an armoire that not only weighs several hundred pounds, but is about 8 feet tall and wide as well. They had to get this down a tricky winding staircase and I know that it was incredibly difficult to do--both physically, and mentally in terms of the intricate planning and maneuvering that was required . These guys were absolute pros, and they handled both aspects of it perfectly. And they wouldn't even take a break afterwards, even though I suggested they do after seeing what they had to do to deal with that piece. They didn't want to cost me even a few minutes of moving time. On top of how good they were at their jobs, they were both great guys as well. I honestly can't recommend either Will or Christian highly enough. I'll be moving again in a few years, and there is no question that I'll be using ABLE again, and requesting both of them in particular.

Great to hear! Thank you so much for the shout out to your move team! We greatly appreciate your feedback and your business! Stay safe, be well!
5.0

Exceptional service, dependable, and very professional staff. Really appreciated the attention to protecting my household goods and property. The packing, move out, and move in all went well with no problems or issues.

So happy to hear your move went well! We greatly appreciate your business and your feedback!
5.0

It was excellent. They were very responsive. I would highly recommend them.

Description of Work
Moved us to our new home.

Hi [Member Name Removed]! Thank you so much for your review! So glad you had a great move!
5.0

Well - polite staff. A little disorganized at the office end, but it worked out.

Description of Work
Moving from house into storage for 6 weeks, then into new home.

I could not have been more pleased with our move. Abel Moving and Storage is fantastic! I had to change our move date twice and our move coordinator was most gracious in accommodating us each time. She was always happy to answer any questions I had and helped to make the entire process run smoothly. The packing team did a great job -not one thing was missing or broken. They arrived on time and were very professional, efficient and courteous. Ditto for the moving crew. They were very careful to make sure they didn't ding up walls, etc. and were very professional and courteous. If we ever move again I will definitely use them and highly recommend them to anyone. Kudos for a job well done!

Description of Work
Able Moving and Storage packed us and moved us to our new home.

Thank you very much for the positive review, and for using Able Moving & Storage, Inc. to handle your move. We look forward to assisting you with any moving services in the future. Good luck in your new home!
5.0

The crew arrived on time and could not have been more careful, efficient and professional. But what I'm really blown away by is what happened AFTER the move. Due to our carelessness, two boxes of important papers were left sitting out on moving day, and the crew loaded them along with everything else. We REALLY needed those boxes but had little hope they could be retrieved, since all the items had been packed away in big wooden storage crates. However, when we called, Able was happy to do a search for the boxes and found them the very next day, then DROVE THEM TO OUR HOUSE. We are just halfway through our move experience, but so far, I am really impressed by Able. We obtained three estimates, and theirs was the lowest by a small margin.

Description of Work
Able moved less than half the contents of my house in preparation for staging. They'll store those items until I move, then complete the move after the house is sold.

Thank you for the positive review on your move. We make every effort to provide quality service, and it is nice to see such appreciation. We hope you are enjoying your new home!
5.0

This was my first time using a professional mover and I was not sure what to expect. Nick Deneke walked me through the process and gave me quotes for complete pack and partial pack. He was efficient, professional and good at communicating all the details and options. Rush, Diego and a Hispanic lady did the packing and loading of the moving truck. They worked well together and were careful of my belongings as well as the house. Rush and Diego completed the delivery, reassembling my furniture and asking where I wanted each box. They even helped me disassemble and move some things in the new house to make way for the items they were delivering! They were extremely professional and careful of my belongings and the house. I never felt pressured or stressed - they made the whole process efficient and smooth. In fact, I had a certified check to pay for the move and had inadvertently made it out for an amount greater than that which was due. Rush pointed it out immediately and I corrected it. Needless to say, I gave them a 5% tip which I believe is customary if satisfied. I feel that the price of the move was worth every penny in the damage and stress I avoided and peace of mind. I would use Able Moving and Storage again and I recommend them without hesitation.

Description of Work
Pack and move a two bedroom house from Washington, DC to Western Ohio.

We can't thank you enough for the positive review. It takes a lot for someone to go out of their way to write such nice things as you did. It really says a lot for you, and we very much appreciate it! We hope you are enjoying your new home! Sorry for not responding sooner.
1.0

Contacted company to schedule a visit for estimate on moving locally. Was given a 9:00 A.M. appointment. At 9:25, I called their business office to inform them no one had shown up. I was advised they have a 30 minute window but she would call the estimator to see where he was (note: Very friendly lady named Stephanie) and have him call me. 15 minutes later (9:40 A.M.) I called back as I had not received a call from the estimator to let me know when he would show up. The same lady informed me "he is there. He is at your home" to which I responded "no, I'm here and he is not here". I then informed her to contact the estimator and cancel the appointment. I would find another moving company. She was again, very friendly and professional and said "thank you, have a nice rest of your day". About 5 minutes later the estimator called to say he was down stairs. I informed him I had cancelled my appointment since he kept me waiting for 45 minutes. He responded "your appointment was 9:30". I informed the gentleman that Stephanie had confirmed my appointment was 9:00 and that he had a 30 minute window to show up. The gentleman responded "well, HE must have written it down wrong" (I don't now which "HE" he was talking about). I said, well I have cancelled and will find another company. The gentleman responded "yeah, good luck with that" and hung up. He had a very rude attitude during the entire conversation. I called Able back and requested to speak with a manager. Stephanie informed me the manager was in a meeting and she would have him call me. Three hours later I have yet to receive a call.

Description of Work
Nothing, I cancelled.

This is quite unfortunate to receive a bad review for a simple communication error on one of our parts. I personally took your original call and scheduled your estimate. Our scheduling system only has a slot for 9:30, not 9:00, so it would be almost physically impossible to schedule an appointment for 9. It is always possible (but highly unlikely) that I misspoke and said 9. I have also been calling the number you gave us since 9:45 Friday morning to honor your request to discuss this with a manager. This morning (Monday) I left a message on another number you provided us, and we still have not heard back from you. We do apologize for any inconvenience this may have caused, and are sorry you will not have an opportunity to experience our unprecedented quality service. If you do decide that you actually do want to speak with us, I can be reached at (703)330-3772 ext 121. Thank you
5.0

Very pleased. Good communications, correctly sized truck, and the right number of crew. Handled furniture very carefully and were respectful and quick. 3500 lbs delivered in 2 hours and they unpacked and took away the boxes and packing material. They folks are good!

Description of Work
Delivered shipment from overseas to apartment.

Thank you so much for this great review!

We guarantee your satisfaction, and we won’t leave until the job is done right. We pride ourselves on the quality work we provide, while delivering great customer service! We also offer a 10% discount to all veterans. Check out our services offered and call or click to schedule an estimate today!  …

Able Moving & Storage Inc is currently rated 4.5 overall out of 5.

No, Able Moving & Storage Inc does not offer a senior discount.

No, Able Moving & Storage Inc does not offer warranties.