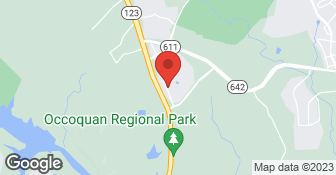 Construction Service Personal, Professional Service. Looking for a profession contracting ..we do all type of jobs.... we give free estimate...

My focus is to provide quality work for my customer’s. We are always striving, to go an extra mile for my customer. customer’s satisfaction it’s our main priority. Cutting corners is never on our mindset. We take pride in our trade we do it with a passion. We take COVID-19 very seriously. We sanitized surfaces, such as workstations, countertops, handrails, and doorknobs. We perform temperature check daily, to ensure that we are being safe. We match our competitors prices!

We specialize in new work for both residential and commerical electrical service and repair. We offer quality work at competitive rates. As a family-operated business, we work in various locations throughout the DMV area.

Woodbridge Plumbing Inc has been in business since Tom and Anne Kreutzer started it in 1973 in the basement of a house on Occoquan Road with just one plumber, Tom. After three years Tom hired his first employee, David McCullen, who stayed with him until Tom and Anne sold the business in October, 2006. As the business grew, it moved first to a rented space at Canfield Industrial Park for nine years, and then to the current office and warehouse in Telegraph Road Business Park in January, 1987, across Telegraph Road from the back of Target.

This pro does not have any ratings or reviews.

Have you hired ANG Contracting llc? Be the first to share your experience and help other people looking to hire this Pro.

we finish basement ,and we paint or crown molding ,remodeled kitchen and bathroom we install ceramic tiles and wood floor. and we can design a bar ......

you need to ask it depend on the work . we can give you reference to other company .....