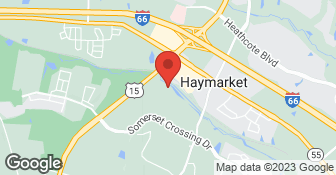 At Advantage, we feel one of the most important parts of developing a good relationship with our clients is being able to keep them involved. After the initial meeting, where we get to know your site, your budget, your tastes, and your ideas, we develop a master plan of your site. All of your ideas and personal tastes are taken into consideration as one of our designers draws up a plan to fit your needs. By combining your ideas with our talent, creativity, and experience, we hope to provide you with a custom outdoor environment that far exceeds your expectations. Our goal is to pay attention to every detail in order to create a flawless transition between drawing and reality. Additional Email: info@advantage-landscaping.co

The demo guys arrived on time, worked hard, and cleaned up well each day. The project eventually turned out well, though I had to argue with the owner about his reluctance to match my current brickwork.

Description of Work
This company replaced a concrete walkway with a brick and mortar walkway.

One of the crew leads (Tommy) came to my house for a walk thru to understand what we needed. Within a week we received an estimate and what he believed to be a landscape design. I should have stopped right here. I wasn't thrilled but this company was referred to me by a friend who said they had a good experience and their yard looked great. It wasn't what I would call a landscape design. It was a poor attempt of using photos taken of the yard and just explaining what would go where. I didn't like the "design" suggestions and they tried 3 more times but eventually I ended up "designing" it myself and just telling them what I wanted and where I wanted it. Tommy did not tell me on the phone in my initial call that they don't do the sprinkler systems themselves, they use a company they partner with to install (Harmony Outdoors). Hesitantly I agreed and we scheduled the sprinkler install. We were also told that we'd get in for the spring clean up early (before memorial day) because it was so early in the year and we were in front of the line. We didn't get our spring clean up until the middle of June. Spring clean up - They did the clean up and pruned plants incorrectly. Pulled out plants that were not dead and pruned plants that it was too late to prune. Installed new plants - we purchased our plants from them even though we were not familiar with the nursery they use. The plants were very poor quality - they died in less than 6 months. Advantage would not replace them per the terms of our contract. I had to file a claim with the BBB and it still wasn't resolved. The timing was terrible. They did the sprinkler system first and then the spring clean up. During the spring clean up they damaged the sprinkler system. I was told they would resolve it directly with their partner company to repair it immediately at no cost (i.e. "this happens all the time) This didn't happen. The sprinkler company fixed the damaged pieces and sent me a bill. When I tried to get them and Advantage to resolve the issue they did not resolve it and I paid the bill. Advantage did not reimburse me for this as they promised - again I tried to resolve this through the BBB claim. There was no resolution. Hardscaping - installed new front walk & stoop. The paver walk and stoop was ok. There was no rhyme or reason on the "design" he just spray-painted something on the lawn. It wasn't correct from a design perspective and I asked them to adjust the lines several times. Some adjustments were made but ultimately it wasn't 100% right. After the walk was installed Tommy wanted the final payment in full, but the work wasn't finished as it still needed to be sealed. I explained that I would not pay for the job until the walk was sealed. It took almost 2 weeks for them to come back and seal the walk and they did it in the rain. Now just a few years later the walk is falling apart and the stoop is stained.

Danny.the owner helped with all aspect of the job he designed and did all the work with his crew .It came out gneaf.I would tell anyone to use advantage for there landscaping.

Description of Work
The company landscaped and put a flower bed in my yard.

Danny and his crew started when they were scheduled, completed one day early, cleaned up completely. The yard is show-stopping gorgeous !

Danny Humphries was very professional. He helped us select the stone and adjusted the plan to meet our needs. The walls were started one way and redone about one tenth the way through to better work with the plan. The end result is gorgeous. We still get compliments on the wall and walkway. His stone mason is a master.

Description of Work
We used them for a new front porch, walkway, walls, island and landscaping.

We asked for several bids on this project, and they were the ones that called back to us that they were generally more concerned because we were putting a garage on top of another garage with a lot of concrete, and we were a little worried about the stability. They reassured us that they would take care of it and he could handle the job, although it was by far the biggest job that he had ever done and we were told that they could do it. The bottom level went in just fine. They laid concrete boxes to support our garage with concrete boxes. The second level, which was streamed in with wood and dry wall, was where the problem began. In a nutshell, they were said to do an 8 feet ceiling and they ended up doing 9 feet instead of calling us to ask if that was okay, to which we would have said fine as it was already done, hope give us the light, they proceeded to lift a huge 1350 feet structure up on jacks and kind of cut a foot off the bottom and lowered back down on the foundation. The entire floor fell off the foundation and landed up against our house, which was next door. Advantage would not take responsibility. They were saying it was the subcontractor's fault that they had told the subcontractor what to do. Then the lawyers between the two companies had to deal it out and this delayed our building, and they had to come back and we had to hire a structural engineer to come in and tell us what was safe. They were really good to do a mess and did not want to take responsibility, and from then on, it just went downhill. They ordered the wrong own brick even though we told them the brick samples we needed. Instead of buy it locally down the road, they tried to cut corner and save money by ordering it from other state and ended up getting the wrong brick. They walked away from the project unfinished. There were small details that were unfinished like putting in the counter wrap on the bar and the kitchen and putting a cabinet in above the wash and drier, putting an electrical switch in the kitchen to control the garage light. We ended having to pay the electrician to come out and do these, and we paid him separate from our pocket out of the project. We had to hire out some other people to complete the project and pay again to have them done. things done when they left, and did not respond to our phone calls or call us back. We weren't given any kind of warrantee or guarantee for the building as others do, and they didn't even come out and finish the last few things. They did have an on-site manager, Rick, and he was awesome. He was very easy to deal with on a day-to-day basis. I could tell him what the problems were. I could tell him what specifications to different things I like. There was another person, Danny, and he was not doing what was right. Danny was really difficult to deal with. He would not return phone calls. He wouldn’t show up for weeks. He didn't even bother to come back to the property after the finishing of the project. The only reason we hired them was because we have a friend who had hired them and said he was pleased with them. I wouldn't recommend them to anyone.

Description of Work
We used the services of Advantage Custom Construction and Landscaping. They built a three-story garage, the bottom two stories are garage and the top story is an apartment above the garage.

Exterior Medics is a premier home remodeling company, specializing in exterior replacement and repairs for both commercial and residential properties. When it comes to service and execution, we are unmatched. We've earned the Angie's List Super Service Award for 8 consecutive years, and are among just 2% of contractors nationwide to earn the GAF Master Elite status. Our team handles every project with utmost care and a laser-focused attention to detail. We consider every home we touch to be a reflection of our high standards, and treat every homeowner like a beloved member of our own family. Bonded and well insured. Licensed in both Maryland and Virginia.  …

Advantage Lawn & Landscaping is currently rated 3.7 overall out of 5.

No, Advantage Lawn & Landscaping does not offer eco-friendly accreditations.

No, Advantage Lawn & Landscaping does not offer a senior discount.