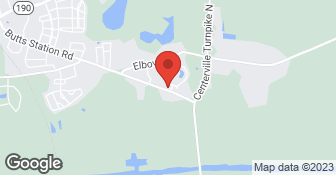 Ben was so unprofessional. My husband was heading out of town to be deployed. We needed our yard taken care of before we moved out of our rental. I called Ben and he told me to text the address to him and he would get back to me. I ended up texting him 3 different times (I was desperate). I never heard from him. So incredibly rude and professional. All he had to do was text me back and say, "I'm sorry I can't get to it this week". I would not hire.

Description of Work
We used a year of lawn care service (not mowing). While the service was good it was the most expensive of the ones we have used without much better results unless we wanted to pay even more money. Another very frustrating problem is their billing. They mis-billed us at least twice and it is also unfortunate they don't take credit cards.

This is a follow up to my review posted on 08/21/2012. We finally went to court to try and recoup our money for the mess that Ben Shepperd made of my backyard. What happened in Court was absolutely outrageous. Mr. Shepperd and his attorney blatantly lied to the Judge. First, he denied preparing one of the estimates that he prepared based on which of the two jobs we wanted to do (different design / cost). Secondly, his attorney told the judge that my husband and I had vacated our home for several months which was another blatant lie and completely irrelevant (and why would this have affected the concrete work at all). The attorney also told the Judge that on the one or two times that Mr. Shepperd came back to fix his work that there were dogprints all over the concrete. This was especially amusing / frustrating considering we have been married over 21 years and have NEVER owned a dog, also we live in a townhouse with a fenced in yard so dogs cannot get into our yard). Unfortunately we did not win our case. Mr. Shepperd's attorney kept arguing that we could not prove what the industry standard for concrete work was. My attorney argued that all you had to do was look at all of the pictures we provided and it was obvious that no standards were met. The Judge agreed with Mr. Shepperd's attorney. The most frustrating part of this whole thing was the Judge said to Mr. Shepperd that the work he did WAS THE WORST HE HAD EVER SEEN AND THAT HE SHOULD BE ASHAMED OF THE WORK HE DID. My attorney failed to file the paperwork to appeal on time, so basically we have to eat the cost of the horrendous work that Mr. Shepperd did. The yard looks worse than it did before we hired him and also have to now have someone fix all of the landscaping as well. My next step is to file the Board of Contractors (or whatever entity he has to get his license though) and file a complaint with them. Unless you want to throw your money away, I WOULD NEVER RECOMMEND THIS COMPANY!!!

Description of Work
Ben did a great job installing pavers to widen our driveway which led to him grating our yard and reseeding. We ended up with an uneven lawn and more weeds than we had to begin with. He planted bushes that died because they were planted improperly according to a landscaper we hired to fix his mess. He built a pergola that wasn't secured properly and isn't level, installed a fence that he never finished and moved a shed which he damaged in the process. DO NOT HIRE BEN!!!

We hired Ben Harper to do some landscaping in our back yard which included extending our concrete patio as well as concreting over the existing concrete. I specifically asked him if the cracks from the existing concrete would end up showing through and he assured me they would not. Needless to say, a few weeks later the concrete starting chipping and flaking away where he placed new concrete over the old concrete. He came out once and just slapped some more concrete over that area and the concrete is completely uneven in color, the cracks from the existing concrete are showing through (with weeds growing through) and some of the concrete is completely has chipped away so much we can now see the old concrete pad! Mr. Harper initially took our calls and kept telling us he would come out and take a look to see what he could do but time and time again he just never showed up without even a phone call. He eventually stopped taking our calls altogether. Additionally, the landscaping he did was not up to par. A few of the bushes he planted died and the ones that didn't die were not planted deep enough in the ground and lean forward towards the house. Also the bushes never bloomed as promised. There are weeds all over the yard which I was assured would not be a problem because of the weed mat he put down. The weeds are so bad that I pull them and you can see the weed mat all through the yard. I am going to have to buy more mulch and soil to cover it up. Also, he put pea gravel in the back yard (basically small rocks mixed with sand) which we were told would harden "almost like concrete" and now it is just like rocks and sand mixed. All the weeds grew through this as well and when I pull them it is pulling up the pea gravel and it looks like a complete mess. I found Mr Harper through the Service Magic website and am attempting to get them to get the landscaper to contact me but to no avail. I have also filed a complaint with the Better Business Bureau. As a last resort I will be taking legal action.

Providing the Hampton Roads area with the finest In landscaping, and turf management needs. Whether you live in Chesapeake or Virginia Beach we can Beautify your lawn, landscape and home. Whether you need lawn mowing, landscape design, fescue, bermuda, zoysia or st. augustine sod, we can help. Whether you have drainage problems, standing water in the yard, more weeds than grass or a paver walkway, driveway, patio or pool deck, we can help. Annual turf management, core aeration, slit seeding, landscape renovation and more..  …

We offer total exterior services from bare dirst grading up to full landscape design and installation. We also offer exterior cleaning as in powerwashing and exterior window cleaning.

How is Coopers Creek Land and Lawn overall rated?

Coopers Creek Land and Lawn is currently rated 1.7 overall out of 5.

What days are Coopers Creek Land and Lawn open?

What payment options does Coopers Creek Land and Lawn provide

No, Coopers Creek Land and Lawn does not offer eco-friendly accreditations.

Does Coopers Creek Land and Lawn offer a senior discount?

No, Coopers Creek Land and Lawn does not offer a senior discount.

Are warranties offered by Coopers Creek Land and Lawn?

What services does Coopers Creek Land and Lawn offer?