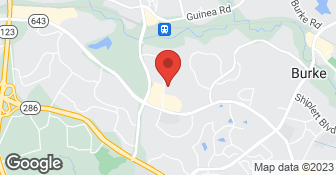 Affinity Painting is a family owned and operated business that has been serving the Washington Metropolitan Area for two generations. With over 30 years experience, we pride ourselves on our courteous service, our expertise, and creating relationships that lead to repeat business. Unlike most companies we don't just have clients...we pride ourselves on our REPEAT clients! We recognize that home improvement is not an everyday occurrence for you. There is education and preparation that needs occur to ensure your project goes smoothly and according to your expectations. We do this through a process of communication and education so we can co-create the best possible experience with you. Your safety and the safety of our employees is very important to Affinity Painting. We adhere to rigorous safety and security standards to offer you peace of mind including: - Osha Compliant - Clean up daily and remove dangerous tools from premises. - Carry comprehensive worker's compensation and liability insurance. References available upon request....

I’ve used Affinity several times for handyman work and they come through every time. I had an urgent repair request and contacted a few different people because of the urgency, and he responded quickly and was able to fit me in same-day. Prices quoted on everything have been fair and all interactions have been professional. I have recommend them to family.

Description of Work
Helped with repairs

I would give a page of happiness because he was punctual, he is affordable, he was fair, and he was just a pleasure to work with. It's his passion. Same day responsiveness. He was early. Definitely professional. I have got to know him over the years and he use to work on a Navy submarine I think. So, he is one of those pulled together Veterans. I would use him again for any painting things I would have. In fact he is painting an antique iron bed for me coming up here. He is getting his daughter involved. Which, I thought was a neat father daughter thing. He has an artistic eye and he is free to give suggestions. It is a Veteran owned business. He is professional, he kind of stays out of the way, and is very responsible. He cleans up. He leaves the place better than he found it. For example, I asked him to just paint for me walls and we thought the trim was fine, but it bothered him so much that he painted the trim for free because he couldn't stand to leave it like that and they cleaned all the doors. I asked him to paint the walls and they actually wiped down all the trim and all the door and then painted them just because it bothered him to leave it that way in a way that he didn't think it looked nice.

Description of Work
He did a room for me.

Description of Work
The work is ongoing. They painted my bedroom and it looks spectacular. They replaced rotted wood on my roof and matched the existing paint. They are in the process of removing many layers of paint from my front steps, which is quite a lot of hard work. They are professional in every sense of the word. I can't recommend highly enough!

Very professional in communication, reasonable price for the work that was performed, met my timelines.

Description of Work
Paint and trim for three rooms in condo.

Affinity Painting lead by Edward Green III and his crew are more than just painters, they are outstanding craftsmen and true professionals. As I was flying in from out of state on a red-eye, Edward offered to meet me conveniently on a Saturday afternoon at my rental property, which I needed to turn around as soon as possible. We walked through the property as soon as I arrived and Edward identified obvious and potential issues that needed immediate, medium or long-term attention. At the conclusion of the walk through he tabulated a ball-park estimate for the entire property ranging from interior touch up and complete painting of various rooms and closets, kitchen and basement of a 2-story stand alone singe family home, to power washing and staining the deck. Later that evening Edward sent me an email with a detailed and very fair estimate in writing directly consistent with the walk through and the conversation we had earlier in the afternoon, and listed a commitment to and agreed upon price on several other tasks to be completed at a future day in the near future. The following Monday, Edward and his crew arrived on time (actually just before I arrived at the property). We again reviewed and agreed to the estimate, work plan for the day, and discussed how to best utilize everyone's time as I had other projects and landscaping issues to address with my boys. As it turns out I was delayed at the paint store matching some custom paint, and Edward and his team took the initiative to call me on my cell phone and we agreed to switch gears and he and his crew tackled my sliding door project to efficiently use the time of the crew instead of having them standing around until I returned with the additional paint. The door I purchased for teh task didn't exactly fit the opening, but by the time I returned Edward and his crew had built-up the base of the door with appropriate pressure treated wood to ensure the weather resistant integrity of the exterior entrance remained intact, and prepared the door for installation. The Affinity crew is very professional, cleaned up all their work, did not use any foul language (very appreciated as I had my two young boys with me) and didn't even work with a radio on, and even offered to dispose of the obsolete door. All the agreed-upon immediately necessary interior painting for the entire house and work on the sliding door was completed in a high quality manner in just one day, allowing me to hand over the keys to the new tenant just moments after Edward and his team left in the late afternoon. I have easily decided to continue to work with Affinity and Edward on the other lower priority but necessary projects on the list, even though I'm back home out of state.

Mr. Green responded quickly to my request for an estimate to remove wallpaper in my kitchen and to paint the walls . He estimated that the work would require two days to complete and gave me a time frame. On the morning that work was scheduled to begin Mr. Green and his father arrived promptly at 8:00 A.M. and immediately began to work. They removed the wallpaper quickly, efficiently, and neatly. They cleaned and prepped the walls and worked non-stop until 8:00 P.M., preferring to work until the job was finished rather than drag it out for two days. Both gentlemen are extremely personable, polite, and professional. We are very pleased with their work and plan to use them again.

Mr. Green came promptly to give me an estimate after my initial inquiry, and he was able to set up a date to do the work very quickly. He and his assistant arrived on the day and time promised and they began work promptly at 9 a.m. They worked thoughout the day to removed wallpaper from a small, but tall, foyer. They worked quickly and cleanly, and because things went well they were able to complete all the work in one (long) day. They left the area clean and the walls look terrific. I would certainly hire them again.

Description of Work
Mr. Green and his assistant removed wallpaper from my 1 1/2 story foyer, prepared the walls, and then painted (two coats) the area.

I have had great experiences with this company in the five years I have been using their services and do not plan to go to anyone else for such work in the near future.

Description of Work
I hired this company to do some interior painting and caulking. He also helped me put up my Christmas tree.

I had seen photos of Affinity Painting's work from a friend. I called and was scheduled that week. Ed, the owner, talked me through the different types of paint and suggested colors. Even before the actually painting began, I was getting excited about the outcome. His love of paint and artistry is infectious. Ed, who formerly had a career in the U.S. Navy, I found out has an excellent work ethic, attention to detail and pride in his work. I was delighted with our new office, as was my husband. I am planning to have Ed back to paint my basement and garage this year.

How is Affinity Painting overall rated?

Affinity Painting is currently rated 5 overall out of 5.

What days are Affinity Painting open?

No, Affinity Painting does not offer a senior discount.

Are warranties offered by Affinity Painting?

No, Affinity Painting does not offer warranties.

What services does Affinity Painting offer?