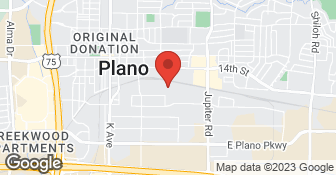 Chimney & Wildlife Specialists is an owner-operated business that serves the Dallas, Ft. Worth and Amarillo areas. All labor is performed by professional technicians who work for their local company branch—we never use sub-contractors. This allows us to hold our technicians to the highest standards of excellence in the industry, as well as maintain our commitment to customer satisfaction....

Description of Work
I can’t recommend C & W Specialists highly enough! We needed to get our gas fireplace refurbished, our chimney cap repaired, and our dryer vent cleaned-out. C & W was extremely prompt, and Carlos came out to our home and looked over both the fireplace, and chimney cap and gave us a very fair estimate. When Danny, the technician, came out, he did an amazing job. The fireplace is beautiful and we know everything is safe.

Worked with Angie's List staff for 3 wks. explaing the nature of work required but NO suitable service provided got in touch with me.

Hi [Member Name Removed], Did you make general service request through Angie's list or specifically attempt to get a hold of us(Chimney and Wildlife Specialists)? I am unable to locate a service request made by you. You can however reach our company at 214-883-8876 or by email at info@chimneyandwildlife.com. We would be more than happy to help you.
4.0

Description of Work
The two men came on time and wore their masks. They went on the roof and took pictures of the cap and chimney area. They were very honest and told me that the cap had rust but doesn’t need to be replaced. There was an area that was probably the culprit where the leak is occurring. They used sealant to patch up the area. I wasn’t aware that they charge a fee just to come out. There needs to be better communication on this as many customers like myself, aren’t aware of this.

The tech was helpful and professional.

Great very punctual, very polite and did a great job explaining everything. They are returning to do outside work next month.

They did good work. They were on time and professional. They also made sure that everything was covered and my house will not get wet.

Description of Work
He gave me an estimate then they rebuilt the chimney for 2 days.

Very responsive and friendly. He checked the pilot light and gas connections and did a general inspection of the whole unit, all the while explaining what he was looking for.

I recently had my house leveled and the fireplace and chimney were moved 0.9 inches up. I requested to have the interior of the chimney videoed and inspected after cleaning. This was agreed to. The guy videoed the damper area and the top 0f the chimney with his cell phone. That was done only so he could charge me more for the cleaning. Note my chimney has a cap on it. He tore a hole in the screen to put his cleaning cable driven by a portable power drill. with a collapsible whip cleaning tool on the end. As far as I could tell no inspection was performed and I do not think he was qualified to perform and inspection. The video via cell phone was very unsatisfactory. For this service I was charged $399.00 He was the only one that responded to my Anges List request. The last time I got an excellent job done for less by a professional and unfortunately he is no longer in business. Carl L Phipps 4716 Applewood Road Fort Worth, TX 76133 I have always gotten excellent people from Anges list.and I will still use you. But not for chimney sweeps. Carl

Tech was on time, professional and knowledgeable.

Description of Work
Chimney and fireplace repair inspection and cleaning.

Quote was competitive. i liked the fact that the same person who gave the quote also did the install. He was very personable and appeared to know his business. Overall a good experience.

Several years ago, Tony Darrah, the owner, came to our house and did some repairs inside our fireplace. He did a very good job. We called him again this year (in October) to inspect the chimney and fireplace. We called several times before we scheduled the inspection. Tony didn't come out, but sent a serviceman named Corey. Corey came into our living room, bent down in front of the fireplace, got his flashlight out and shined it up just past the opening and said, "Yeah, it just needs to be cleaned.". I asked him if that was the total inspection. He said it was. I thought that was a pretty lousy inspection. Before Corey arrived, my husband had completely vacuumed the inside of the fireplace. There was no debris. Corey proceed to his truck and brought a ladder and sat it in the yard. He brought in a canvas-type cloth that was folded up, and placed it on the living room floor. We never saw Corey use the ladder.. We do not believe he ever looked at the top of the chimney. Inside the house, he spread the canvas floor cover in front of the fireplace and got his brush and ran it about half way up the fireplace and said okay, that's it. I asked him if he was supposed to run the brush up only one time. He said that was all it needed. He never had to use the floor covering because there was nothing to come out of the fireplace. Since my husband had already vacuumed the inside, it was no cleaner when Corey finished what he called cleaning than it was when he got here. We feel we were totally ripped off for $174 (which included a $10 coupon off the price for Angie's list). I could not believe Corey expected $89 + tax for what he called an inspection and that much again for what he called cleaning.. I called Tony's office and talked with the lady who answered the phone. She said Tony was out of town until the following week and she would have him call me when he returned. I felt Tony would call when the lady told him what happened. There was no phone call the next week. I called again November 9th.. Tony called and left a message (we were gone to the doctor's office when he called). Tony left his cell phone number. I called him as soon as we got back. He did not answer. I left a message on his cell phone. I never heard from him. We were very disappointed. We thought Tony would at least call to see what we had to say. My husband is not able to get up on the roof. (We are elderly.) That is why we called to get the fireplace and chimney inspected in the first place. We certainly do not feel that we were treated fairly. I sent a certified letter to Tony on November 30th. We never heard from him, but the certified letter was signed for. I waited a couple of weeks or so after I sent the letter to give Tony time to respond. After no response, I called the lady in the office again. She said Tony had been out of town during the holidays, but she would contact him that afternoon and see if he ever read the letter. I asked her to please let me know by the next day. That was about two weeks ago. I know the holidays are a busy time, but I think Tony has had ample time to respond. Tony is actually a very nice man, and we really thought he would do the right thing, but I guess our little job was not big enough to address having a problem. We do not feel we should have been charged for the inspection and cleaning, since neither was actually done. We feel Tony should refund half of our money, since Corey did have to spend the time and cost to come to our house. He should not have also charged for the cleaning.

Description of Work
We needed to have our chimney and fireplace inspected to be sure it was safe to build a fire in the fireplace.

Started talking with one of the folks in the office via email. I had a bunch of questions and they were all answered very fast. After I decided on a set of Logs that I liked, Contacted them again place order and set up a time for the install. The installer was coming out on Jan. 11th at 2:00. There was a cold front rolling in the 11th in the afternoon and I was worried they wouldn't be able to do the cleaning do to high winds. I installer called and ask if he could come early? We set up a time for him to come that morning. He was very nice did a great job explained how to start the logs to my wife cleaned up everything. I couldn't be happier with the work and the new gas logs.

It went very well Billy was very professional and explained everything that he was doing very nice man turns out he was the owner of the company I was very impressed. I am a customer for life would hire again.

Description of Work
Chimney cleaning and screen on Chimney

The work was done quickly and I had no issues.

Description of Work
They swept my chimney and inspected the fireplace and chimney inside and out.

Initial appointment arrived on time and cleaned the chimney but had to make 2nd appointment because he forgot to bring the special pan for the embers for gas logs. He made appointment for 2 days later @ 8:30 but arrived late and that is why I rated him a "B" for punctuality. "B" for responsiveness because there was no notification of arriving late on second appointment.

They were definitely on time and the service was good.

Description of Work
They removed a dead animal from the chimney,

So happy to discover Chimney and Wildlife Specialists! The pricing is reasonable and show up when promised. Corey was very polite, professional, and diligent at clearing the debris from our Chimney. I highly recommend them!

Squirrel out of attic and new cap. They explained everything completely with options. They were prompt and very professional.

It worked out great. I could not believe the beauty of the fireplace. The only way you can tell it is gas was to look closely or realize that the logs weren't disappearing and collapsing on themselves. The fake coals on the bottom are totally realistic until you get within 3 feet.

Description of Work
I had to have my chimney resealed and had them install a gas fireplace.

They called and asked if they could arrive earlier which worked out better for me. They were fast and very friendly. The lead professional was very knowledgeable and answered all my questions respectfully (no talking down to me) and explained what I needed to do depending on what I wanted to burn. Glad I had it cleaned!

Description of Work
I had them clean out my chimney since I had purchased my home in the summer. I wanted to use it but thought it best to have it inspected and cleaned first.

Austin was very professional, thorough and took the time to answer all of our questions and address our concerns. He was prompt and called with an ETA. We will be calling C&W for a chimney sweep after we close.

Description of Work
We needed a chimney inspection in a home we were in option for.

Easy to make an appointment. Technicians showed up timely and was very professional, courteous, and tidy in their work. Would definitely recommend them.